When you consider the vast number of signaling pathways needed to coordinate the 37.2 trillion cells in the human body, it’s difficult to think of our normal health and functioning as anything less than a miracle.1 Many of the major breakthroughs in our understanding of signaling pathways have been attained by removing organs or creating a “break in the chain”, and observing what functions are affected as a result. For example, an experimental operation intended to halt a man’s severe epileptic seizures left Henry Gustav Molaison with an inability to form new long-term memories. At a huge cost, Molaison’s memory loss led to fundamental insights into the medial temporal lobe and memory organization.2,3 In the 1970s, removal of the cranial cervical sympathetic ganglia from rams,4,5 and removal of the pineal gland6 confirmed the pineal gland as an important mediator of photoperiodic signaling.

There are many similar hallmark stories for each of the major endocrine glands, and studies of specific biological pathways have paved the way for a deeper understanding of disease and created opportunities for therapeutic applications. Cell signaling is now studied on a remarkably intricate level, and new signaling mechanisms continue to be discovered. If you mentioned exosomes, epigenetics or T cell engineering to someone 100 years ago, you would have received blank looks. Here, we share two examples to demonstrate how the intricate knowledge of cell signaling can reveal therapeutic approaches to treating major diseases.

In light of World Glaucoma Week for 2020 (March 8th–14th) we delve into the pathways surrounding a unique neurotrophic factor, Ciliary Neurotrophic Factor (CNTF). We show you the mechanism of its unique receptor binding and share the rationale behind CNTF being explored in glaucoma clinical trials today. Second, we explore the intricacies of poly-ADP ribose polymerase (PARP) signaling and show how it is being pursued as a promising approach to the treatment of cancer.

Glaucoma is a group of eye diseases that cause progressive damage to the optic nerve at the point where it leaves the eye to carry visual information to the brain. As the second leading cause of vision impairment in the world, glaucoma is estimated to affect 6.9 million people globally. The disease is often referred to as the “sneak thief of sight” or the “silent blinding disease”, because it has no symptoms until significant vision loss has occurred. The exact causes of glaucoma are unknown, and its complexities are evident in the ever-growing list of epigenetic and environmental risk factors for the disease. Often, but not always, glaucoma is associated with increased intraocular pressure (IOP), and overcoming this change in IOP has been a major therapeutic approach. However, this is not enough; glaucoma is also associated with the degeneration of retinal ganglion cells (RGCs). Therefore, finding ways to protect or enhance the function of RGCs is a major priority for the field.

Ciliary neurotrophic factor as a candidate therapeutic for glaucoma

CNTF is a neurotrophic cytokine, with a name derived from the finding that CNTF promotes the survival of chick ciliary ganglion neurons (the cells that control pupil constriction) during a critical period of embryonic development.7 While CNTF is not essential for development and survival in mammals, its demonstrated neurotrophic activity across different cell populations has led to it being pursued in clinical trials.8 Jeffrey Goldberg, Professor and Chair of Ophthalmology at the Byers Eye Institute at Stanford University, is focused on the neuroprotection and regeneration of retinal ganglion cells and the optic nerve. His work has been extended to clinical trials across several ocular diseases, as he explains:

“CNTF has shown strong neuroprotection and regeneration effects in many labs and in many preclinical models of glaucoma, and thus is a strong candidate for human testing. A recent Phase 2 trial in a different retinal disease, macular telangiectasia, showed positive neuroprotection effects. We are in the middle of a Phase 2 trial in glaucoma, and based on a strong record of safety and evidence of biological activity in glaucoma patients, we are currently expanding that trial to increase patient numbers and test multiple doses.”

CNTF has a unique mode of action, in that it has a three-part component receptor complex. The CNTF-specific component, CNTFRα, does not play a direct role in signaling. Instead, it forms a complex with two other receptor components, gp130 and LIFRβ, which are also shared with other broadly acting cytokines (including interleukin-6 and leukemia inhibitory factor).9 The three receptor components are initially unassociated on the cell surface, and are brought together in a stepwise fashion.9 The effects of CNTF are mostly confined to the nervous system, where the CNTF-specific component of the receptor is mostly found. Meanwhile, the related cytokines are able to exert their effects in non-neuronal cells.

Through this tripartite receptor binding, CNTF has been shown to:

Goldberg also points to several other pathways that show promise in the pursuit of glaucoma treatment, listed in the table below. He says that “all of these have shown compelling proof-of-concept in pre-clinical models of glaucoma and optic neuropathies, and some are moving into clinical testing in patients.” 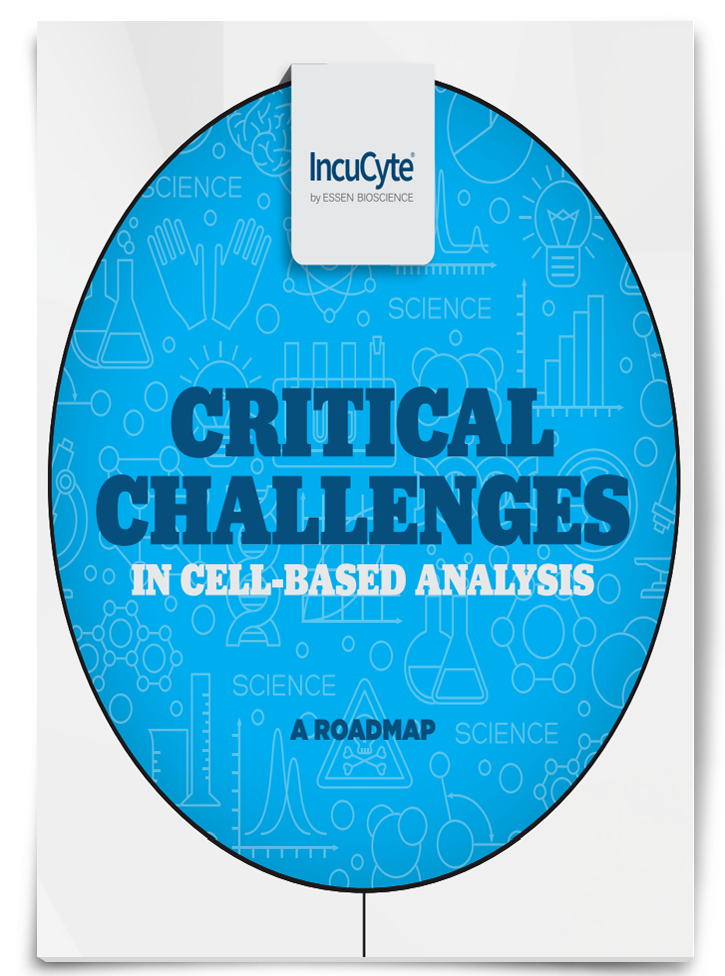 Cell-based analysis provides scientists in a wide range of fields with crucial insights into the functionality of cells. However, as cellular models become increasingly advanced, so too do the demands upon the technologies and workflows used to study them. Download this infographic to explore the critical challenges in cell-based analysis.

Multiple DDR systems repair single-strand and double-strand breaks in DNA, and prevent the generation of potentially deleterious mutations. The dysregulation of DDR pathways results in genome instability, which is a hallmark of cancer.15 Simultaneously, disrupting DNA repair is a therapeutic approach to certain cancer types.

Homologous recombinant repair (HRR) is a type of DDR pathway that repairs double-strand breaks. The most well-known proteins of the HRR pathway are BRCA1 and BRCA2, which play a crucial role in maintaining genome integrity.16 Cells with BRCA1 and BRCA2 mutations are HRR deficient, and are a target for a class of cancer drug called “PARP inhibitors”.

PARP is a family of enzymes that were discovered in the 1960s17,18, and shown to play a critical role in DNA repair 20 years later.19

Cells with defective HRR pathways depend on PARP-mediated base excision repair for survival.20 Consequently, the inhibition of PARP is a promising strategy to selectively kill cancer. PARP inhibitors prevent the backup repair system from working by trapping PARP on the DNA, creating a complex that thwarts DNA repair and replication.21 The accumulation of double-strand breaks eventually leads to cell death, allowing HRR-deficient cells to be targeted while leaving healthy cells alone.

Dr. Constantia Pantelidou, Research Fellow at Dana-Farber Cancer Institute and Harvard Medical School, was the lead author of a 2019 paper published in Cancer Discovery that revealed an additional mechanism of action of PARP inhibitors.22 Pantelidou explains:

“We demonstrated that by inducing DNA damage, PARP inhibitors activate a proinflammatory signaling pathway within cancer cells. This leads to production of proinflammatory cytokines and subsequent recruitment and activation of immune cells, such as dendritic cells and CD8+ T cells. CD8+ T cells are the cells that attack and kill tumor cells. Therefore, activation and recruitment of cytotoxic CD8+ T cells to the tumor microenvironment is critical for a productive anti-tumor immune response and subsequent tumor clearance. Our study shows that activation of the proinflammatory signaling pathway in the tumor and CD8+ T cell infiltration are necessary for the anti-tumor efficacy of PARP inhibitors in BRCA-mutated triple negative breast cancers. Therefore our work provides a mechanistic rationale for combining PARP inhibitors with immunotherapies.”

Pantelidou notes that PARP inhibitors are commonly used in combination with a secondary treatment, and that the goal is to maximize patient responses to PARP inhibitors:

“Despite promising activity in BRCA-associated cancers, PARP inhibitor therapy is not curative and can be hindered by drug resistance, that can develop shortly after treatment. In addition, the majority of non-BRCA-mutated cancers do not respond to PARP inhibition. In order to overcome acquired and inherent tumor resistance to PARP inhibitors and extend their utility to BRCA-proficient cancers, efforts have been focused on combinatorial strategies.”

The use of PARP inhibition is being explored in other types of cancer. Recently, the antitumor activity of olaparib against metastatic prostate cancer was confirmed in a prospective clinical trial in a genomically defined population.23

As demonstrated in the two examples above, incremental insights into signaling pathways can be leveraged for therapeutic approaches – even if we are still building a complete picture of the mechanism of action.

Michele Trott, PhD
More from this author >
Advertisement
Chosen for You
Webinar