Kate Robinson is the editorial assistant at Technology Networks. She joined the team in 2021 after obtaining a bachelor's degree in biomedical sciences.
Learn about our editorial policies
The smart bandage held by tweezers. Credit: Negar Rahmani
Read time:

External barriers such as the skin are the first line of defense against damage to internal structures. Upon injury, there is a complex, coordinated process that takes place to repair the wound, comprising four stages: hemostasis, inflammation, proliferation and remodeling. This process is vital to prevent colonization by pathogens.

An open wound provides a moist, warm and nutritious environment for the colonization and proliferation of microorganisms. A wound can become infected with microorganisms from either the environment, surrounding skin’s natural flora or endogenous sources. If a wound does become infected, the innate immune system will begin a cascade of events in efforts to eliminate the microbial threat.

Wounds can be classed as either “acute” or “chronic”, the former being caused by external damage to intact skin and the latter a result of predisposing conditions that compromise the integrity of the skin. Acute wounds do not usually permit sufficient time for much colonization to occur, as the “breach” is typically addressed quickly via the abovementioned four-stage process. However, chronic wounds fail to complete the normal repair process, therefore the internal tissues are exposed for a longer period, increasing the risk and extent of colonization.

Reactive oxygen species (ROS) are generated and consumed by prokaryotic and eukaryotic cells. Basal concentrations of ROS help in the fight against invading microorganisms and ROS “messengers” such as hydrogen peroxide stimulate key phases of wound healing. In non-infected wounds, hydrogen peroxide is present at low concentrations, however an increased concentration indicates an environment in which inflammation is dysregulated and biofilm-forming pathogens can rapidly grow. Elevated levels of hydrogen peroxide are therefore a biomarker of possible infection.

A team led by assistant professor Daniel Roxbury from the University of Rhode Island has developed a “smart bandage” – by combining bandage fibers with nanosensors – designed to detect wound infection by measuring levels of hydrogen peroxide.

Roxbury elaborates on the bandage’s underlying technology, “Functionalized carbon nanotubes that selectively respond to hydrogen peroxide and report concentrations by means of a near-infrared fluorescence signal.The nanotubes are encapsulated within individual microfibers that prevent leaching of the nanosensors but enable peroxide to diffuse within.”

Single-walled carbon nanotubes have been used previously to monitor ROS e.g., in plants as a biomarker for plant health, however, there have been challenges with the integration of these technologies as the near infrared fluorescence is very sensitive to the local environment.

ROS have short half-lives and are therefore difficult to detect and quantify in patients. However this is possible with the use of electrochemical biosensors, which apply different technologies to those used in the smart bandage. The application of these sensors on different organs is restricted due to the requirement of a signal transducer connecting to the sensor. On this subject, Roxbury comments, “A benefit of this technology compared to other techniques is that costly and sensitive electronics do not need to be attached to the actual bandage. The readout is wireless (optical) and does not require an attached power source.” 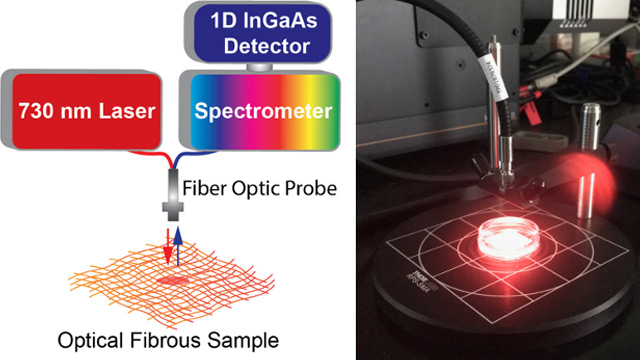 Probe system: Nanosensors are placed inside the individual fibers of a textile. Image courtesy of Daniel Roxbury

So far, the smart bandage technology has been tested in vitro, within petri dishes of wound-relevant cells that create peroxide in response to a bacterial infection. Once these tests reach completion, the team plans to progress to in vivo animal studies.

“The dressing is not specific to any one type of infection, but rather can be used to diagnose and monitor the development of chronic wounds and pressure ulcers as well as acute wounds. The hope is to the deploy the technology for routine use in hospitals and nursing homes for the monitoring of chronic wounds in patients with diabetes and the elderly, i.e., those who are particularly prone to developing such physiological conditions,” concludes Roxbury.