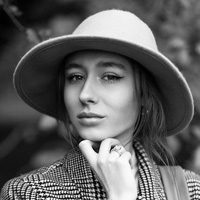 Complete the form below and we will email you a PDF version of "Flagella, Cilia, Pili: What's the Difference?"

Many organisms – ranging from single-cell protists to humans – rely on microscopic hair-like structures to perform a wide range of cell signaling and motility-related tasks.1 Flagella, cilia and pili are all similar in shape, however, each possesses a different structure and biological function.

This article outlines the features of flagella, cilia and pili, including their structure and function, and explores the key differences between them.

Flagella are long, rope-like organelles used primarily for cellular motility – although in some organisms they may also play a sensory role.2 Although they are most commonly found on bacteria, they are also present on a variety of eukaryotes, including algal, fungal and some animal cells. Each cell type may have a single flagellum or multiple flagella that move independently in a variety of waveforms.3 They are typically larger than cilia or pili, ranging around 5–20 μm in length and 10–30 nm in diameter.4 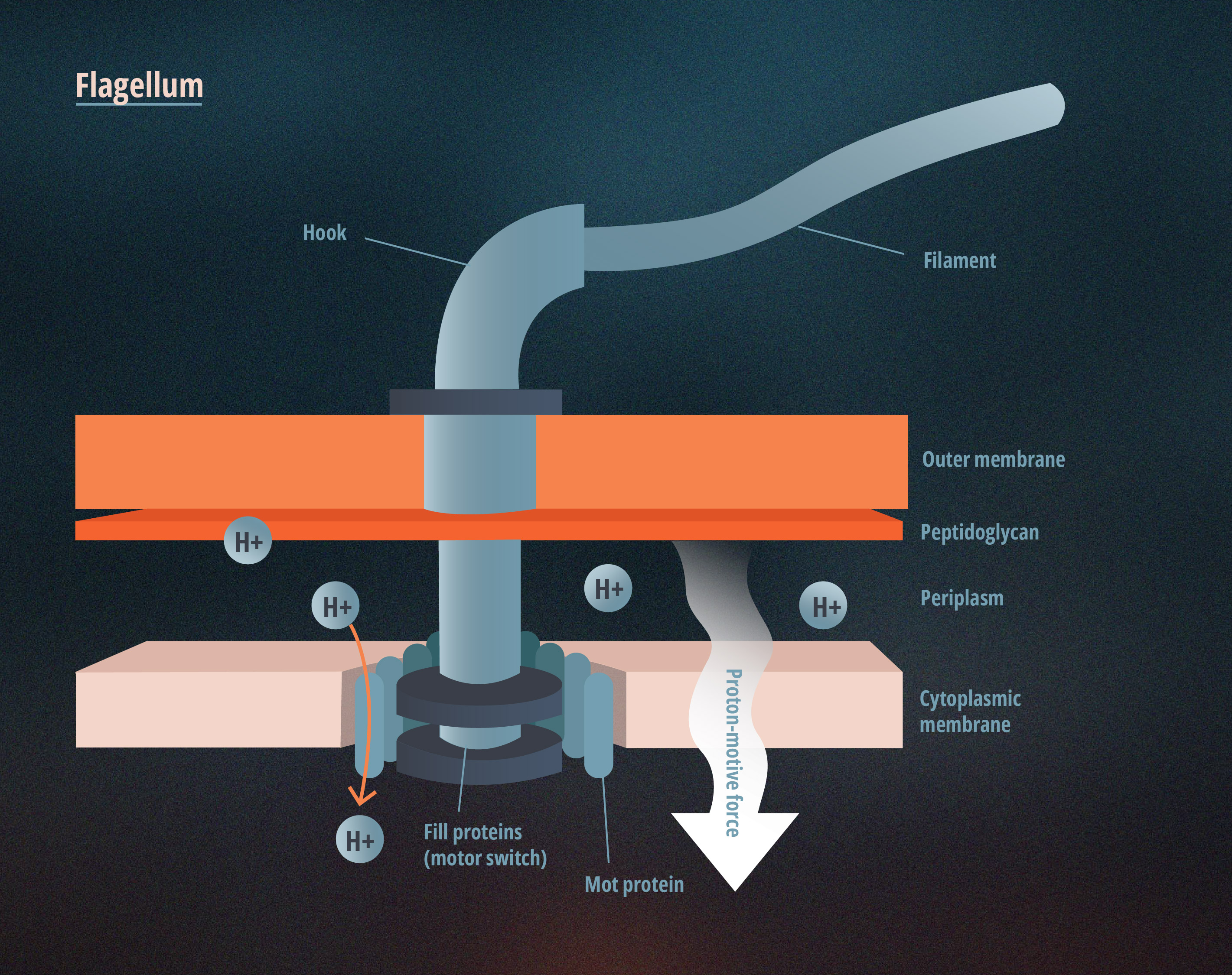 Figure 1: Structure of a flagellum.

Flagella are long, thin constructs composed of structural proteins. Common features of flagella include protein filaments and a basal body. However, apart from these key components, flagella structure varies significantly between the three types present in bacteria, archaea and eukaryotes. An example is shown in Figure 1.

Bacterial flagella are composed of flagellin – a globular protein that assembles to form a hollow helical filament.3 At the base, filaments are linked to motor proteins by a curved, tubular joint known as the "hook”.

Bacterial flagella turn with rotary motion and are powered by proton motive forces. This is where hydrogen ions diffuse through protein pores at the basal body of the rotary motor.5 The resulting potential difference in the electrochemical gradient across the membrane drives a rotating motion of the flagella and propulsion of the bacterium.

Archaeal flagella – also known as archaella – also consist of a hollow, helical filament attached to a molecular motor.6 However, research has shown that archaella are both structurally and evolutionarily distinct from bacterial and eukaryotic flagella.

Archaella are composed of archaellins – structural glycoproteins like those found in some bacterial pili.7 Archellum can occur as singular structures, or in bundles that rotate upon a single assembly. Unlike bacterial flagella, the motion of archaeal flagella is powered by the hydrolysis of ATP to ADP and inorganic phosphate.

Cilia are threadlike projections that extend from the main body of a eukaryotic cell. They are typically smaller than flagella, however, they share many structural similarities with eukaryotic flagella.10 They are used for either motility or as a sensory organelle, depending on their type. A cell may have one primary cilium or multiple cilia. Neither bacteria nor archaea possess cilia. 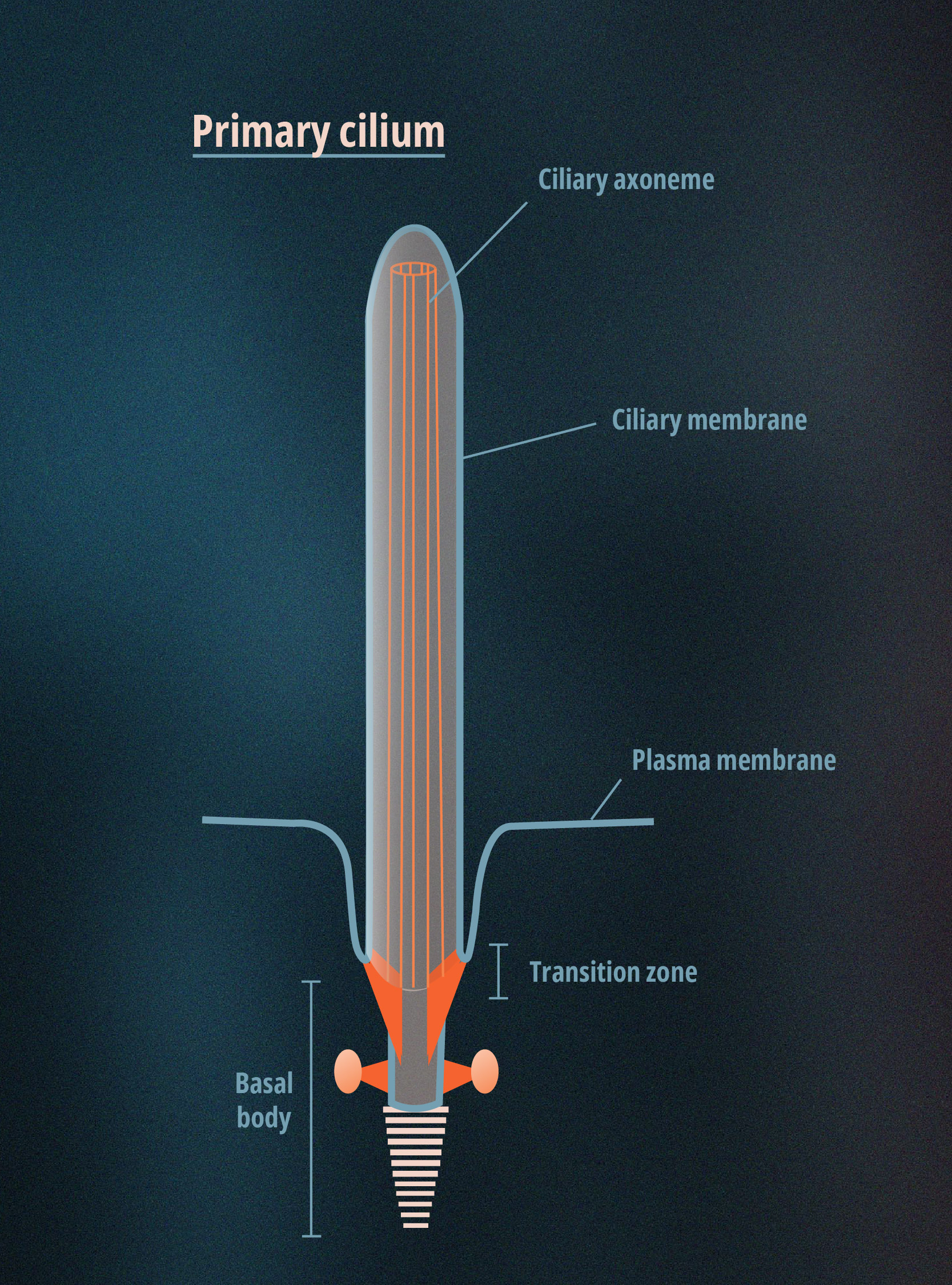 Like flagella, cilia are supported by basal bodies and are encased in the plasma membrane.7 Basal bodies are anchored to the cytoskeleton by ciliary rootlet proteins. A porous structure, known as the ciliary gate or transition zone, controls the flow of molecules between the cilia and the cell body (Figure 2). Primary (non-motile) cilia are composed of nine fused pairs of microtubules, whereas motile cilia feature two extra single microtubules like their flagellum counterparts.10

Non-motile or primary cilia can be found on almost all cell types in the human body.10,11 They are found on almost all eukaryotic cell types,12 including some protists known as ciliates.13 Non-motile cilia are typically singular. Research suggests that non-motile cilia play a key role as a sensory organelle in cell signaling, growth control and energy metabolism. Defects in the primary cilia can lead to pathological disorders commonly termed ciliopathies.11

Motile cilia are highly conserved throughout evolution, with even single-celled ciliates shown to possess them.14 Motile cilia can be found in large numbers, and move in a biphasic, whip-like motion.15 While ciliates use their motile cilia for locomotion, multicellular organisms primarily use their motile cilia to manage the flow of fluid substances such as mucus or cerebrospinal fluid. This requires a coordinated action where vast numbers of cilia beat together, forming a collective motion that allows fluid transport.

Pili – also known as fimbriae – are polymeric hair-like, non-motile appendages found on bacteria and archaea.16 Some pili are dynamic structures capable of extension and retraction.17 Unlike flagella and cilia, pili are not membrane-bound organelles. They exist as surface-bound external filaments that extend perpendicular to the cell body.

Pili play a role in bacterial sexual reproduction (also known as conjugation) and facilitate attachment and DNA transfer. They can also be used for the attachment of bacteria to animal cells or other objects and for biofilm formation; hence, pili are an interesting target in antimicrobial research.18 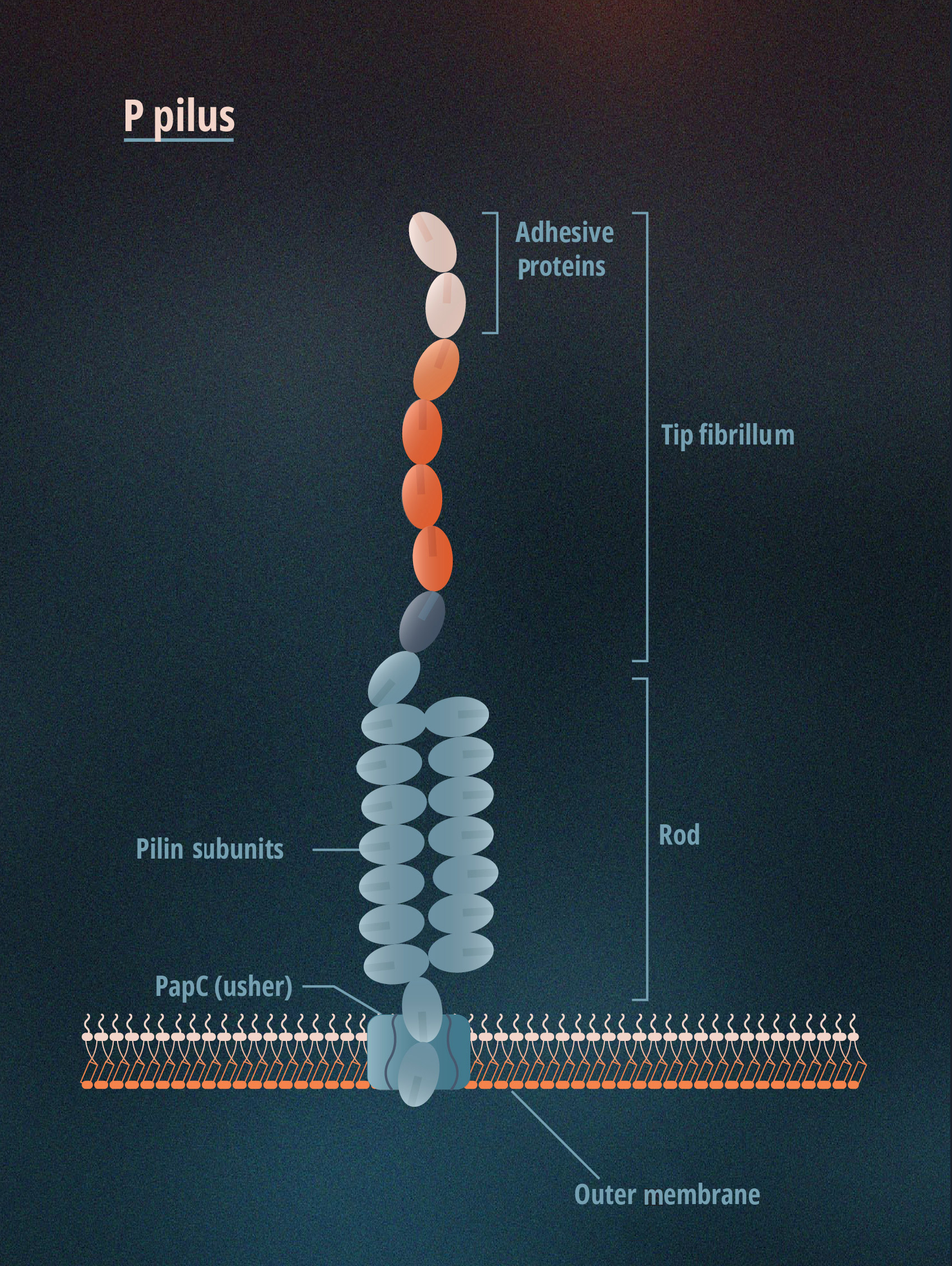 Figure 3: Structure of a P pilus.

Pili are generally shorter and thinner than flagella and are made from structural proteins called pilins.17 Major and minor pilins arrange in a helical structure to form a filament of approximately 0.3–3 μm in length. Unlike cilia, pili are categorized based on their structure and biosynthetic pathway rather than their function.

Chaperone-usher pili are widely expressed among types of Gram negative bacteria. They play important roles in pathogenicity, including host attachment and biofilm formation. They are made up of two subassemblies – a short thin tip called a fibrillum, which extends from the helical cylinder or “rod”. Several subtypes of chaperone-usher pili exist; broadly, these can be categorized as either type 1 or P type pili.

Type I pili are involved with attachment to inanimate substrates such as solid surfaces and eukaryotic cells.19 They contain adhesive proteins at their tip and are thought to act as molecular springs, absorbing shock and protecting cells from shear forces in their environment. Due to their role in adhesion, type I pili assembly has been a focus of antimicrobial therapeutics research.20 However, the exact composition and function of these structures have yet to be confirmed.19

P type and type I pili can be distinguished by their assembly platform – known as the usher – embedded within the bacterial outer membrane.21 The usher, the protein naming of which varies between bacterial species, is involved in pilus biogenesis. In Figure 3, a P type pilus is shown, with an usher composed of a PapC protein.

Type IV pili are dynamic structures involved in bacterial motility.22 They can rapidly elongate and retract to create the mechanical forces that allow bacteria to move. Bacterial type IV pili are similar in structure to type II secretion system pseudopili. Functionally, however, they are different. Instead of secreting folded proteins into the extracellular environment, they traffic folded pilin subunits to their tip to extend the filament length. Type IV pili act as important virulence factors in human diseases such as Clostridium difficile infection and meningococcal disease.23,24

Conjugative type IV, or sex pili, help to transfer genetic material between bacterial cells, promoting the initial joining of mating pairs.25 Like other type IV pili, they are capable of rapid extension and retraction, which generates enough mechanical force to pull bacteria together for the sharing of genetic material in a process driven by ATP hydrolysis.17

Type V pili also function as virulence factors.16 They are unique to Gram negative bacteria, and like other pili types they play a role in adhesion, aggregation and biofilm formation.26,22 Type V pili can be subcategorized into major (long) pili and minor (short) pili. Major pili are between 0.3–1.6 µm in length, and minor pili are between 80–120 nm in length. Whilst type V pili also consist of pilins, they do not remain attached to a membrane pore; instead, they attach to the bacterial outer membrane with anchor subunits at the base of each filament.27

Curli are surface fibers present on the surface of Gram negative bacteria.28 They are made of amyloid proteins called curlins, which aggregate to form non-branching extensions of the extracellular matrix. Curli fibers participate in cell adhesion and biofilm formation; hence, curlins are an exciting target for research with biomedical applications.29

Gram positive bacteria utilize their cell wall envelopes as a cytoskeleton to display surface structures such as pili. Their biosynthesis and surface attachment occurs with the assistance of sortase enzymes.30

Two types of pilus-like structure have been identified in Gram positive bacteria by electron microscopy. They are thought to be involved in adhesion and biofilm formation. Some bacteria , such as Streptococcus gordonii and Streptococcus oralis, have short, thin rods or fibrils, while other much longer, flexible structures have been observed in pathogenic streptococci, oral pathogens and Corynebacterium species.31

Generally, the longer rod-like pili comprise three covalently linked protein subunits. Each includes an LPXTG amino acid motif (where X denotes any amino acid) or variant, which allows them to be processed by specific sortase enzymes during pilus formation, linking the components to each other and the whole structure to the peptidoglycan cell wall. Unlike Gram negative bacteria, Gram positive pilus components are connected via non-disulfide covalent bonds.

Complete the form below to unlock access to this Audio Article: "Flagella, Cilia, Pili: What's the Difference?"

Natural Killer Cells and Viruses: A Game of Chess Played Over Millennia