Anna is a science writer at Technology Networks. She holds a first-class honours degree in biological sciences from the University of East Anglia, before joining Technology Networks she helped organize scientific conferences.
Learn about our editorial policies
“Henrietta Lacks (HeLa): The Mother of Modern Medicine” by Kadir Nelson, oil on linen, 2017. Collection of the Smithsonian National Portrait Gallery and National Museum of African American History and Culture, Gift from Kadir Nelson and the JKBN Group LLC.
Read time:

Complete the form below and we will email you a PDF version of "Henrietta Lacks: The Mother of Modern Medicine"

A portrait of Henrietta Lacks has recently been unveiled at the Smithsonian’s National Portrait Gallery, to recognize her life and the vital contributions HeLa cells have made to science. The oil on linen painting, The Mother of Modern Medicine, was produced by artist Kadir Nelson in 2017, and will be on view until November 4th. Commissioned by HBO, the painting will be jointly shared with the National Museum of African American History and Culture. “It is fitting that Henrietta Lacks be honored at two Smithsonian museums, as each approaches American history from unique and complementary perspectives,” Kim Sajet, director of the National Portrait Gallery said in a press release.

Who was Henrietta Lacks?

Unlike the HeLa cell line named after her, Henrietta Lacks was little heard of until Rebecca Skloot’s book, The Immortal Life of Henrietta Lacks, published in 2010, brought her story into the spotlight. Born in 1920 in Virginia, Henrietta was an African American tobacco farmer, a wife and mother to 5 children. In 1951, aged just 31 years, Henrietta died from an aggressive form of cervical cancer, only 10 months after first seeking treatment at Johns Hopkins for a “knot” in her womb. During her treatment at the hospital, samples of cancerous tissue were taken from her cervix. These cells went on to become the immortal cell line known as HeLa.

The Significance of HeLa Cells 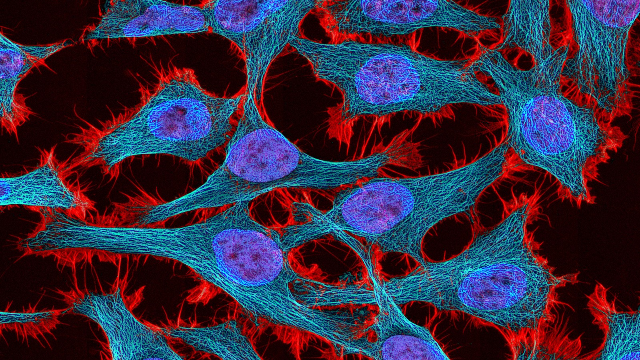 END_OF_DOCUMENT_TOKEN_TO_BE_REPLACED
Inscribed on Henrietta’s gravestone, (which was donated nearly 60 years after her death), are the words ‘Her immortal cells will continue to help mankind forever.’ And indeed, Henrietta’s cells have already helped to advance numerous fields of science and medicine. The cells were the first that were observed to divide multiple times without dying and enabled Dr. George Gey to start the first immortal cell line. Subsequent discoveries and developments resulting from their use include the polio vaccine, AIDS research, gene mapping, IVF, and cloning to name a few. HeLa cells have also travelled to space to test the effects of microgravity on cells.

The treatment of Henrietta and her cells have in recent years raised many issues in standards of bioethics and informed consent practices. No permission was given by Henrietta for the cells to be harvested, in fact both she and her family were unaware that this had happened or that the cells were continuing to be used by scientists. (This was a common practice in the 1950’s and not unique to Henrietta or Johns Hopkins). Despite the vast distribution and use of the HeLa cell line worldwide, Henrietta’s family were never compensated for the resulting patents or profits. They didn’t become aware of their existence until over 20 years later, when they were contacted for blood samples by researchers investigating the contamination of other cultures by HeLa cells. In the years since, vast progress has been made in protecting patients and improving research practices. Two members of the Lacks family are now part of a committee which works to decide which scientists can use HeLa cells, and Henrietta’s legacy is increasingly recognized, including a Posthumous doctorate in public service from a college in Maryland.

The Mother of Modern Medicine 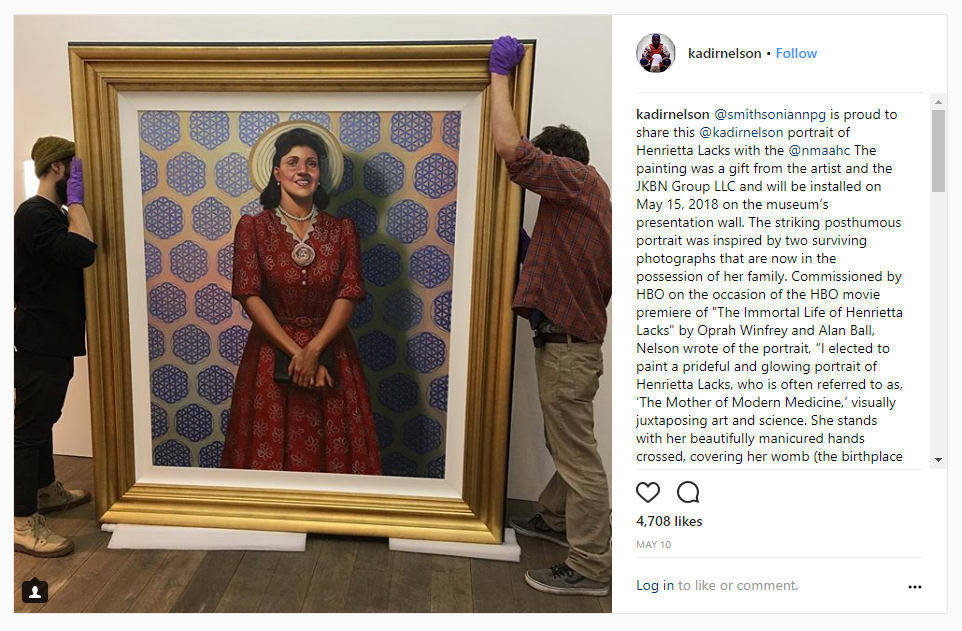 As the latest of these recognitions, Kadir Nelson’s painting symbolizes Henrietta’s plight and contributions to science. “She stands with her beautifully manicured hands crossed, covering her womb (the birthplace of the immortal cell line) while cradling her beloved Bible (a symbol of her strong faith). Her deep red dress is covered with a vibrant floral pattern that recalls images of cell structure and division. Other symbolism includes her bright yellow hat, which functions as a halo, her pearls as a symbol of the cancer that took her life, and the repeated hexagonal wallpaper pattern, a design containing the ‘Flower of Life,’ an ancient symbol of immortality and exponential growth. The buttons missing from her dress reference the cells that were taken from her body without her permission” describes Nelson in an Instagram post.