Imaging in Biology: How Many Words are Cell Images Worth?

The famous phrase ‘a picture is worth a thousand words’ betrays how much importance we give to visual information in our quest to understand and appreciate our world. Scientists began ‘seeing’ biology a long time ago, starting with the observation of macroscopic structures down to their building blocks, namely, cells.

Just as physicists have continued to discover elementary particles that make up others, cells are not the final building block of tissues. However, cells constitute an important organizational unit that mediates crucial biological processes, and observing them has taught us a lot. Red blood cells were observed via microscopy in 16581, and shortly after, Robert Hooke coined the term ‘cell’ to denote the numerous ‘pores’ that make up cork2.

Microscopy has since become an essential companion tool for biologists, which has been constantly improved to reach increasingly high resolutions. This has undoubtedly driven much of the progress in understanding diseases; microscopy has been so invaluable to research, that it is now slowly being incorporated into the drug discovery process.

This transition will not be easy, as imaging has been shaped by the needs and means of the academic world. So, are cell images worth the effort? 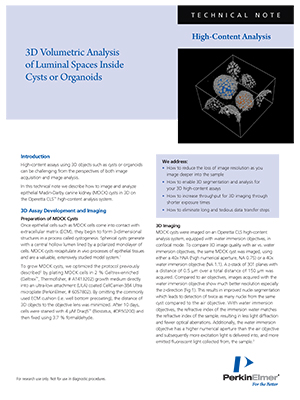 In this technical note, we describe how to image and analyze epithelial Madin-Darby canine kidney (MDCK) cysts in 3D on the Operetta CLS™ high-content analysis system, overcoming the most critical of challenges of 3D assays.

Seeing images of cells has always fascinated both scientists and the lay public, as it reveals the beauty of biology and gives meaning to concepts belonging to the microscopic world that can be hard to conceptualize.

With the onset of fluorescence microscopy, cell imaging has truly become an art: we can now label specific cells or parts of cells with different dyes, and render them in 3D thanks to advances in 3D imaging.

However, these images are not just aesthetically pleasing: they are incredibly rich in information. As Dr. Moeendarbary, lecturer at University College London points out:

“Visualizing physical objects is always the best way to understand them.”

There is a myriad of interesting features to extract from images, many of which can be quantified using highly specific fluorescent markers. To start with, he says cell imaging “can show us simply how cells look like in the first instance, so we can discover the link between their shape and function.”

Amongst other metrics that can be visually quantified, Dr. Pedrigi, assistant professor at University of Nebraska, identifies “cell morphology, proliferation, migration, and up-/down-regulation of genes and proteins as a response to experimental conditions; where relevant, intracellular processes can also be quantified as a function of spatial position within the cell.”

Finally, imaging can also reveal more than meets the eye, as explained by Dr. Pedrigi:

“There are numerous techniques for examining the mechanical behavior of cells, most of which require imaging to visualize the cell deformation to an applied load; for example, magnetic bead cytometry, optical tweezers, and atomic force microscopy.” As Dr. Pedrigi points out, investigating mechanical forces is important because “studies have shown that altered mechanical behavior and properties of cells can be related to dysfunctional phenotypes”. 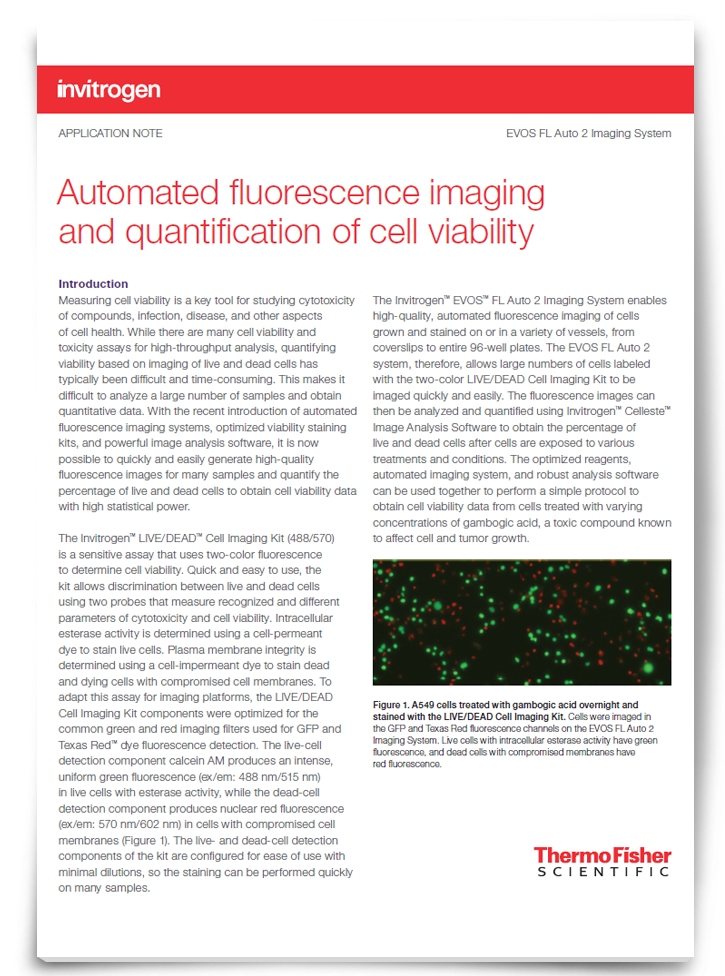 Measuring cell viability is key for studying cytotoxicity of compounds, infection, disease, and other aspects of cell health. With the recent introduction of automated fluorescence imaging systems and optimized viability staining kits you can now easily generate high-quality fluorescence images and quantify to obtain viability data with high statistical power.

So, what is the real added value of imaging cells? After all, there are many other tests that are very informative, such as ELISA, PCR and Western Blots.

Something that is perhaps less apparent is the point that read outs from standard biochemical assays are generally missing one key aspect that imaging provides: topographical information.

In some biochemical assays, content pooled from the entire assay is analyzed, which means we cannot know which sub-population of cells is responsible for the detected signal. Instead, we are averaging results over an entire population of cells that can be highly heterogeneous, thus missing on important disparities amongst cells4. Interestingly, laser microdissection allows us to choose specific cells within the assay for downstream analysis, but in fixed tissues5. On the other hand, while other assays such as FACs do enable single-cell analysis, they still do not allow scientists to link results back to the original location of cells in the assay. This is due to the fact that cells must be separated from the original assay to flow through the instrument as single cells.

In contrast, cell imaging enables the study of individual cells, but also makes it possible to correlate results to their location in the assay. In other words, we can spy on cells, to visualize their physical interactions with other cells and investigate the effects of the micro-environment on their behavior. This is crucial, as there is now mounting evidence that cells heavily interact with their microenvironment in homeostasis and diseases such as cancer6,7. Even more importantly, we now know that the micro environment can affect the response of cells to drugs8.

Another important advantage of (live) cell imaging is that it enables the study of dynamic cellular processes, as opposed to other standard tests that are inherently limited to being performed at a given and final timepoint measurement. This can uniquely inform scientists on crucial processes such as migration, which is a hallmark of diseases such as cancer, and could be pharmacologically targeted.

Can we ever let go?

Cell imaging is incredibly powerful, but it has some limitations. According to Dr. Moeendarbary, “it is very simple to image cells at fixed time points, however live cell imaging can be more complicated.”

Amongst other complications, mechanical and thermal drift can easily arise with live imaging which can ruin the whole experiment. In parallel, Dr. Moeendarbary also points outs that “high-resolution imaging of internal cellular structure requires more advanced microscopes that are less accessible and expensive.”

A more inherent limitation to in vitro cell imaging lies with its physiological relevance. However, this is gradually improving with increasingly complex assays such as organs-on-chips. On the other hand, in vivo imaging is possible and incredibly powerful9 but tends to require even more sophisticated equipment, personnel and funding.

More generally, cell imaging requires skilled personnel and can be quite time-consuming, as its acquisition rate and throughput is rather low compared to other biochemical assays3. It can also be finnicky, especially as laboratories move towards imaging complex 3D cellular assays.

In addition, staining and imaging live cells can have toxic side-effects. A separate issue exists related to image analysis, which can be technically challenging. Efforts are underway to overcome these limitations, with companies developing automated imaging platforms along with analysis software for a higher throughput imaging.

According to Dr. Pedrigi, “There are plenty of aspects of cell imaging that involve routine and basic tasks that could be automated to save time for the biological researcher.”

Despite all efforts to automate imaging, one must not forget that scientists love to look at their cells, to have a direct feel for what is happening; it would be hard for them to entirely let go of this task.

But, as Dr. Pedrigi points out, “if the automated tasks could be shown to be performed as accurately as done manually, it is highly likely that they would be adopted by many within the research community.”

In other words, scientists will need to be convinced that tools can perform imaging correctly, since they know how finnicky it can be and how unique their protocols are.

Cell imaging has become a fascinating field of its own, generating much enthusiasm and insight (literally) into a wealth of new biological processes.

Yet, much of this imaging still pertains to academic research, which can get by relying on time-consuming and finnicky imaging protocols.

More effort needs to focus on adapting protocols towards high throughput and robust workflows for a more efficient drug design.

Care will have to be taken to avoid creating tools that fully automate the process or by-pass the user: scientists like seeing cells for themselves. All this can and should be done, as imaging is bound to add immense value to drug design, especially with regards to the recently discovered effect of the cellular microenvironment on therapies.

In other words, we now need to design drugs also as a function of the immediate surroundings of cells, which can be uniquely studied and tested by imaging cells inside complex in vitro assays.

So, how many words are cell images really worth?

Cell images have now proved that they are worth thousands if not many. With high throughput imaging coming around, this number is going to grow exponentially. But quantity is not quality: rather, we need to get better at extracting relevant data at a higher throughput from images, and more importantly, we need to improve workflows that can facilitate imaging and combine it with other biochemical assays.

8. Son, B. et al. The role of tumor microenvironment in therapeutic resistance. Oncotarget 8, (2017).

The COVID-19 pandemic is happening in an age of social media where there is an expectation that the development of treatments should proceed and succeed as quickly as instant messaging. However, in reality, vaccines takes an average of two to five years to develop, and care must be taken in re-purposing existing drugs.

END_OF_DOCUMENT_TOKEN_TO_BE_REPLACED

Better cumulative decisions in early phases of drug development could lead to a greater chance of clinical success, as the correct dosage can be identified and tested in the right patient populations for the right early indicator. In this article, we delve into the current and future aspects of early-phase oncology trials.

END_OF_DOCUMENT_TOKEN_TO_BE_REPLACED

Where and When Will Oil Spills Reach the Beach?