From research to biomanufacturing

The advent of gene editing techniques has generated more excitement in biology and medicine than any discovery since polymerase chain reaction thirty years ago. By allowing the removal or addition of nearly any gene into any cell, gene editing circumvents tedious, lengthy development of cell lines for research and biomanufacturing.

Internet searches yield extensive material on the three leading editing methodologies: Clustered Regularly Interspaced Short Palindromic Repeats (CRISPR), Transcription Activator-Like Effector Nuclease (TALEN), and Zinc Finger Nuclease (ZFN). ZFN was discovered first, followed by TALEN, then CRISPR. Each method was hailed as an improvement over its predecessor in terms of ease of use and lower cost, to the point where CRISPR has virtually eclipsed the other techniques in sales and usage for all applications but gene therapy.

Traditional cell line development relies on the random integration of transgenes into cellular chromosomes which occurs at frequencies of less than one percent. “The random nature of the transgene integration creates uncertainty for experimental outcomes and made exact replication of genetic molecular events impossible,” explains Martha Rook, Ph.D., Head of Gene Editing and Novel Modalities at MilliporeSigma. “Targeted nucleases such as ZFNs, TALENs and CRISPR produce targeted transgene integration at rates of ten to eighty percent, up to a hundred-fold higher than for random integration. Thus, genome editing enables replication of published genetic changes by independent scientists, creating more certainty about the relationships between observed genotypes and phenotypes. 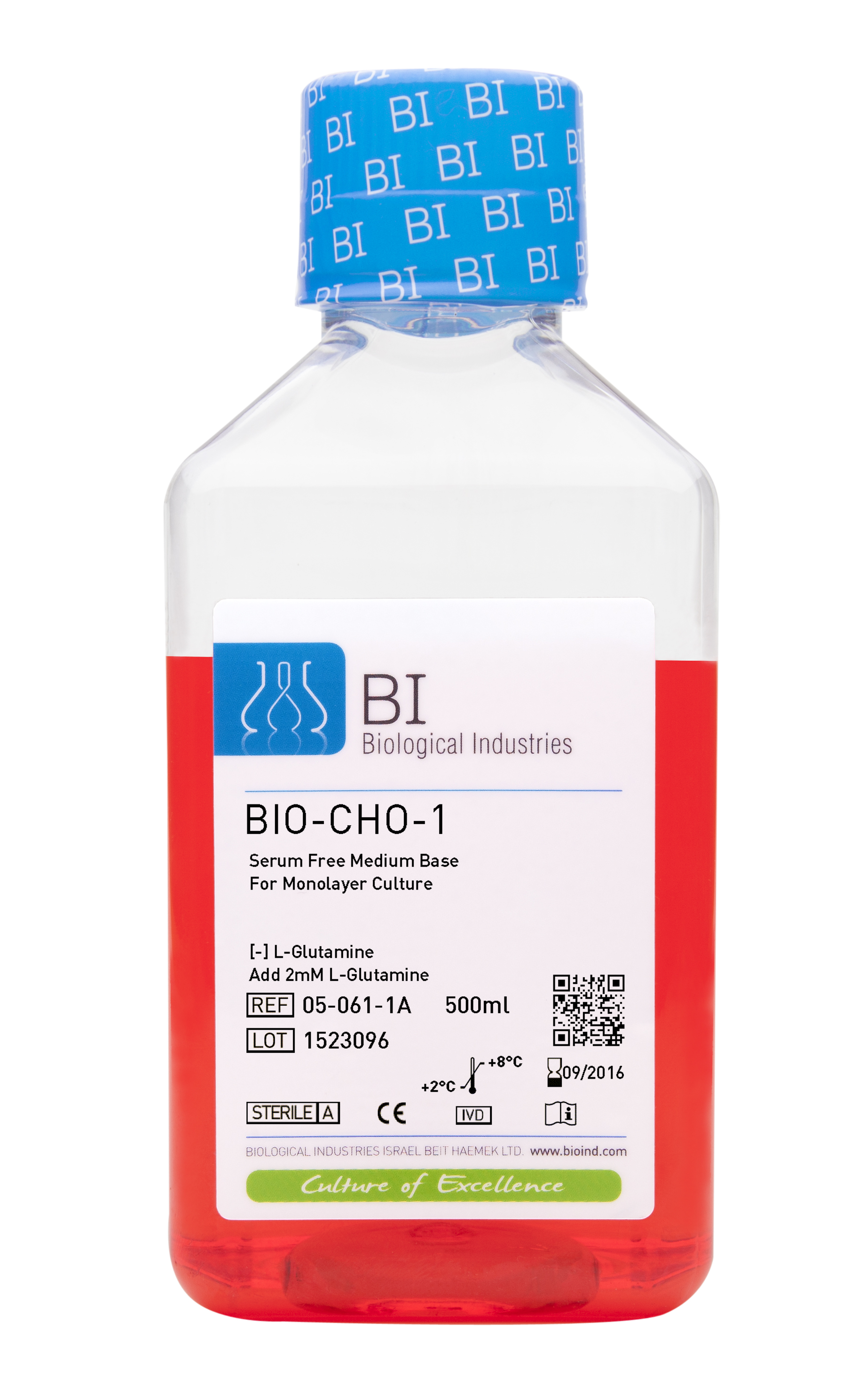 "Our know-how and experience support our customers' scale-up and customization needs, these range from small scale research projects to scale-up of large commercial volumes and quantities"

“By virtue of its simplicity and accessibility CRISPR has democratized genome editing. However, the more mature methods ZFN and TALEN may be more desirable for critical research where clear intellectual property rights are desirable.”

Rook is referring specifically to gene therapy, where the added effort involving the use of TALEN or ZFN is small compared with the value of the final product.

Not all cell types are suitable for genome editing. The limiting factor is the cells’ ability to grow and survive for enough generations to isolate clones. “Early in the application of gene editing to research cell cultures researchers used transformed (cancer) cell types, such as HCT116 and K562, because these cells grew robustly in culture and yielded high editing rates,” Rook tells Technology Networks. “Stem cells have become more and more popular due to their favorable clean (i.e. diploid) karyotype, improved editing/culture protocols, and immense potential for diverse biological studies due to differentiation capabilities.”

Cell cultures for pure research have taken a variety of forms. Recognizing the difficulty in harvesting, culturing, and testing primary cells removed from living human tissues, for years scientists employed transformed (i.e. cancer) cell lines. Where such cells will divide for decades under the right conditions, healthy primary cells become apoptotic after a few generations and their behavior thus lacks consistency. Unfortunately, the genomes of cancer cells are unstable, and the cells are inconsistent models at best for most physiologic responses to drugs or toxins. Hence the fascination with stem cell editing, particularly of induced pluripotent stem cells (iPSCs). The general technique allows inserting a desired genotype into iPSC cells, expanding the cells, and differentiating them into any cell type. 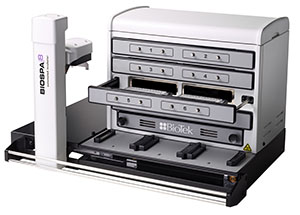 BioSpa 8 is an automated incubator linking BioTek readers or imagers together with washers and dispensers for full workflow automation of up to 8 microplates.  Temperature, CO2/O2 and humidity levels are controlled and monitored through the BioSpa software to maintain an ideal environment for cell cultures during all experimental stages.

BioSpa 8 has generated a lot of interest as it fully integrates and automates three time consuming steps: cell culture, imaging and analysis.

According to Shi his iPSC-based technique is much more industrially relevant and scientifically valid than re-programming cells harvested from individuals with diseases in question, in whom the mutant gene already exists.

Collecting large numbers of cells from such patients is difficult, especially on a commercial scale. “Introducing defined genetic modifications into iPSC lines with CRISPR is much easier,” Shi explains. It allows scientists, for example, to introduce specific genes as opposed to accepting nature’s version of the genetic defect.

Shi describes the challenges of collecting large numbers of samples from such patients, especially for commercial research. “It is much easier to introduce defined genetic modifications with tools like CRISPR into iPSC lines.” This approach enables highly controlled studies of disease-related genes, and allows the study of phenotypic differences among cells of identical genetic background except for the specific edited gene.

CRISPR-based gene insertion also provides a means of modifying cells that are impossible to harvest from living donors, such as cortical neurons, to reflect nuances of complex diseases such as Alzheimer’s. These cultures have become invaluable for assembling panels of cultured cells for cell-based assays in drug discovery.

Shi strongly believes that stem cells, not somatic cells, are the right starting point for creating cultures of edited cells for research. “Stem cells by definition have two properties: they self-renew and can differentiate into functional cells. So, if you modify the stem cells, you can go back to the same stem cell pool with the modification over and over again to make somatic cells, because stem cells in theory are a renewable source. If you modify somatic cells you can only use the modified cells a limited number of times because such cells are not renewable.”

Chinese hamster ovary (CHO) cells are widely used as host cells for the production of monoclonal antibodies (mAbs). The recent elucidation of the CHO genome, plus the availability of suitable gene editing methods, have breathed new life into CHO cell line engineering. Where previous efforts have focused on transfection, screening, and cloning, drug developers can now directly edit in genes for expressed proteins and other desirable characteristics, and delete gene constructs that diminish the cells’ capabilities as protein factories. Genome editing also provides a means to assess gene functions in addition to knockdowns through interfering RNAs. 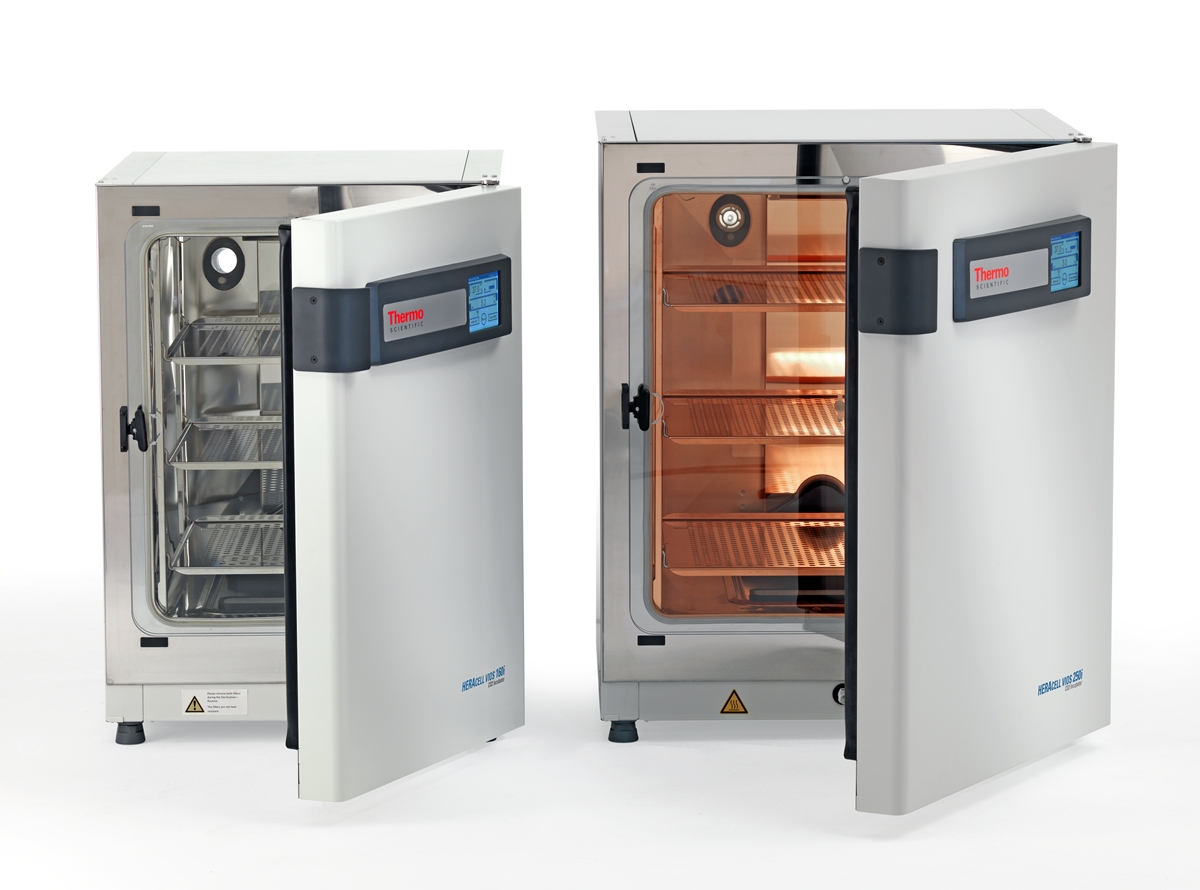 More scientists worldwide trust their cultures to Thermo Scientific™ CO2 incubators than any other brand. They depend on:
•         Proven contamination prevention technology
•         Growth-optimizing solutions supporting applications flexibility
•         User-friendly designs simplifying operation and data collection
Download our brochure and find information on our innovative technology and designs, as well as features and specifications for all of our CO2 incubators and related accessories.


In a 2015 paper Helene Kildegaard, Sr. Researcher at the Technical University of Denmark, described the use of CRISPR/Cas9 genome editing for improving protein secretion in CHO cells, a general approach that she believes will lead to the “rational design of CHO cell factories.”

Kildegaard is partial to CRISPR because of its low cost, ease and efficiency. “With CRISPR you can edit several genes simultaneously, at specific sites in the genome. TALENS and ZFNS work as well but they are less efficient.”

The drawback -- which has become acute in the stratospherically high-value gene therapy market -- is the complex patent environment for CRISPR in the EU and U.S. “It is unclear from whom one might obtain a license to apply the technology,” Kildegaard says, although twists to CRISPR technology (e.g. MilliporeSigma’s product) could alter the intellectual property environment. “Another concern in my opinion is if the technology is so efficient it cuts at too many sites in the genome, which can lead to unintended translocations and other mutations in the genome which affects the performance and maybe stability of your cell line.”

This is precisely the knock against CRISPR for gene therapy, a suspicion that has been recently confirmed.

In a recent paper in Nature Methods1 authors wrote that “concerns persist regarding secondary mutations in regions not targeted by the single guide RNA...We found an unexpected number of single-nucleotide variants...compared with the widely accepted assumption that CRISPR causes mostly indels at regions homologous to the sgRNA.”

With a complex cell and culture system like CHO, what gene editing deletes is often as important as what it can add. “Removing unwanted genes is especially powerful, for example the FUT8 gene, which adds fucose to glycosylated proteins” Kildegaard says. Fucosylated antibodies are generally less effective than their non-fucosylated antibodies, and are more immunogenic.

CRISPR is effective in mammalian cell lines other than CHO, e.g. human and mouse, and is applicable to microorganisms and insect cells. It also works in bacteria but one needs to overcome the difficulty of bacterial cells in repairing double strand breaks.

Along the tortuous pathway between gene and protein in CHO mechanisms responsible for volumetric productivity (protein output per unit volume) are considered top targets for editing. Yet according to Dr. Angelika Hausser, a cell biologist at the University of Stuttgart, the secretory pathway is a significant bottleneck in cellular productivity. Hausser has shown that the transient expression of a small silencing RNA, mitosRNA-1978, in antibody-expressing CHO cells improves productivity. mitosRNA-1978 silences two genes that induce translational repression and/or degradation of messenger RNA involved in the secretory mechanism.

Hausser’s gene knockdown employed nucleofection and not one of the “big three” gene editing methods. But it has attracted interest from Boehringer Ingelheim Pharma -- perhaps for its applicability to other mammalian cell lines and proteins, or through its potential translation to a gene-editing strategy, specifically the removal of the two targets of mitosRNA. “We have not tested other production cells. However, we showed product-independent effects of our engineering strategy,” Hausser says.

Because of its far-ranging, system-wide effects, silencing small regulatory RNAs will become a significant strategy, as will the targeting of secondary cell functions related to therapeutic protein yield or quality. “CRISPR/Cas9 Technology will very likely be further optimized in the future for greater effectiveness and less off-target effects,” says Dr. Simon Fischer, a cell culture development scientist at Boehringer Ingelheim Pharma (Ingelheim, Germany). microRNA Knockouts might become more prominent since you can modulate entire cellular pathways by knocking out one miRNA. Other targets will include those related to product quality like glycosylation.”

This idea has been taken even further down the chain of productivity-enhancing gene editing by a Korean research group, which has used CRISPR to delete genes from CHO cells that inhibit the adaptation of cells to suspension culture. Lee and coworkers at the Public University (Daejon, Republic of Korea) demonstrate that no CHO pathway, no matter how obscure, can resist the power of gene editing.

Gene editing adds a new, powerful capability to cell culture-based research and cell production. By allowing direct deletion and addition of specific genes, editing has obliterated traditional paradigms of cell line development, including the argument over whether nature or nurture has been responsible for continuous (and ongoing) improvements in workhorse cell lines like CHO. Rather than settling for the phenotypes that nature provides, or those available through conventional gene insertion, scientists can now create exact models of precisely the cells they need. The precision and selectivity of CRISPR, ZFN, and TALEN have moreover changed how scientists view genetic engineering, including how they transfect cells and select those suitable for cloning. The ultimate tribute to gene editing is its rapid uptake for gene therapy, a market with much promise but up to now limited results.