Pluripotent Stem Cells in Drug Discovery: Can We Stem the Tide of Unsuccessful Drugs?

Pluripotent Stem Cells in Drug Discovery: Can We Stem the Tide of Unsuccessful Drugs?

Complete the form below and we will email you a PDF version of "Pluripotent Stem Cells in Drug Discovery: Can We Stem the Tide of Unsuccessful Drugs?"

While an increasing number of drugs is being developed, fewer of them are approved yearly by the US Food and Drug Administration (FDA), compared to the 1990’s.1 As of today, it can cost up to $ 2.6 billion for a drug to be developed over an average of 10 years.2

Pharmaceutical companies are acknowledging this problem and investigating ways to decrease this costly inefficiency.

Could one solution lie with the use of pluripotent stem cells?

Why the sudden interest in pluripotent stem cells?

Stem cells are not new: they were first discovered in 1978 in human cord blood.3 Why would we think they can be of more help now? The answer lies with recent developments that have facilitated their controlled use in vitro.

Stem cells come in different flavors: here we focus on human pluripotent stem cells (hPSCs), because they can self-renew and differentiate into nearly all cell types (except the placenta) of the adult body, unlike adult stem cells. hPSCs include human embryonic stem cells (hESCs) derived from embryos, and human induced pluripotent stem cells (hiPSCs) that can be reprogrammed from already differentiated adult cells.4 While hESCs had been studied for a while, hiPSCs were established in 2006,5 setting the stage for stem cells to become more prominent actors in drug discovery. hiPSCs bypass the need to isolate stem cells from human embryos and with it circumvent thorny ethical and political issues. Instead, hiPSCs could – in theory – be generated from patient’s biopsies at any age and could be stored as a bank for producing any cell type at any time.

While this was a huge leap forward, it did not translate into immediate advances for drug discovery, because stem cells were (and still are) prone to significant experimental variability and reproducibility.4 Since then, further progress has been made in better controlling stem cells in vitro, with higher efficiencies in their expansion, maintenance and differentiation. These advances, combined with those recently achieved in 3D cell culture and organs-on-chips catapulted stem cell studies from their infancy into a more mature stage of their applications for drug discovery.4 As Kevin Chen, professor at the National Institutes of Health puts it: “No doubt, the impact on drug discovery of stem cells will be growing rapidly in future years, perhaps in an exponential way.” 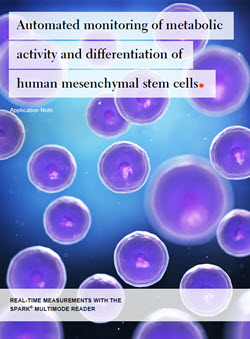 Download this App Note to learn how MSC can be differentiated towards adipocytes, chondrocytes, Neurons, and osteoblasts and how you can fast quantify cell viability, cytotoxicity, and apoptosis with a multimode reader.

Now that we can exploit hPSCs to a fuller extent, they are proving their worth. ihPSCs uniquely provide human disease-relevant cells in large numbers.6 This is because hPSCs have an expansion capacity that most differentiated cells lack. In this way, Chen says that: “stem cells will help drug discovery by providing diverse and robust cell resources.”

Verena Charwat, a post-doctoral researcher at the University of California, Berkeley, believes that hPSCs provide “an invaluable model to explore the bandwidth of human genetic variations in a safe and ethically unproblematic way.” Thus, not only do hPSCs facilitate access to large numbers of cells for in vitro studies, they are also more physiologically relevant. That is because unlike cell lines which tend to acquire artificial mutations during extensive culture, hPSCs reflect a wide range of genetic variations found across patients.

It follows that hPSCs facilitate drug discovery by increasing the physiological relevance of in vitro cellular models used to discover drugs. On one hand, hiPSCs can be used to “establish clinically-relevant disease models” by generating cells with the exact diseased phenotype found in the patient. Because it facilitates the use of patient-derived cells, hPSCs are also paving the way towards personalized medicine, especially for rare diseases. For example, one ground-breaking study has used iPSCs derived from a patient suffering from cardiac arrhythmia to generate cardiomyocytes, identify the mutation at stake in a sodium channel and tailor a treatment in a patient-specific manner. 7

On the other hand, hPSCs can be of massive help towards predicting toxic side effects of drugs, which are one of the leading causes of drug failure. This is because one can generate different cell types with the same genetic background from hPSCs of one patient, such that drugs can be tested not only on an in vitro model of the diseased organ but also on models of other healthy organs that could suffer from toxic side effects, such as the heart or liver. As Charwat points out:

“Stem cells will become an essential tool for screening drug effects and side effects in different genetic backgrounds.”

hPSCs offer an additional perk for drug discovery because they can give direct insight into new pharmacological targets that normally regulate embryonic development but also happen to be disrupted in some diseases, such as cancer.6

Finally, hPSCs can help identify the sub-population of patients that will respond to a drug for clinical trials, considerably reducing the cost of drug discovery.6

What is the catch?

If there were no issues, hPSCs would already be found in every drug pipeline. To start with, Chen points to potential “legal issues, and regulations.” It has also been suggested that reprogramming hiPSCs might carry defects related to mutations, gene copy number variation, and incomplete resetting of DNA methylation.6

Logistically, Charwat talks about the fact that hPSCs pose problems with “cost, timing and reproducibility. They are more sensitive to small variations in handling than other cells such as cell lines, more expensive to maintain and differentiation requires specialized media.” This means it might be more difficult to obtain comparable results between different labs.

On the other hand, there is the natural variation that comes from using hPSCs derived from different patients which, according to Charwat, “harbors the huge benefit of allowing [us] to explore exactly those genetic variations and their role in different physiological and pathological processes.” It is also unclear how much intrinsic variability there is between different iPSCs obtained from the same patient.6

A separate issue arises with the level of maturity of iPSCs after being reprogrammed, as they can often resemble their embryonic counterparts.6 Indeed, Charwat says hPSCs do not “recapitulate the adult differentiated phenotype as it would be expressed by a cell taken directly from a patient.” For example, it is still debated whether hPSCs can be used to model late onset adult disease6 because they can need time or extrinsic factors to develop and mature sufficiently. In addition, while hiPSCs should maintain the genetic mutations of the patient, their reprogramming could affect epigenetic marks: therefore, their use might be adequate for studying monogenic but not epigenetic diseases.6 One solution to this loss of maturity might come in the way of trans-differentiation, whereby cells are directly differentiated from one cell type to the other without having to go through the intermediate embryonic cell-like state.6

Finally, Chen emphasizes that: “3D cell culture is truly helpful and will continually improve to meet the current and future needs.” 3D in vitro models offer an increased microenvironmental control which can yield more predictive drug responses than 2D models.8 Increased microenvironmental control might prove particularly important for maintaining the maturity of hPSCs in vitro, as they can be affected by physical and biochemical factors.6 3D cell culture also facilitates the study of multicellular bodies such as organoids, which are organ-specific tissues derived from hPSCs that are proving invaluable for testing drug efficacy at the organ level.4 Yet, this also means hurdles associated with 3D cell culture must be overcome to facilitate its stream-lining in drug discovery. Interestingly, Chen says that “2D models may have their own advantages over 3D for certain drug discovery applications.”

Mastering the use of stem cells would certainly represent one more feather in the cap of the scientific community in its quest towards tackling the inefficient drug discovery process. This, combined with the marked progress achieved in areas such as 3D cell culture, microfluidics and organ-on-chip technologies promises to see the drug discovery community make strides in the coming years.

Even though the use of stem cells currently comes at a cost, it is bound to pay for itself soon with interest. In particular, stem cells promise to potentiate the discovery of drugs tailored to the unique needs of patients. A thorough knowledge of hPSCs and their differentiation mechanisms also offers the potential to develop entirely new therapies: for example, could drugs reprogram cells inside patients into other types to combat diseases?6

Not only can stem cells limit the number of unsuccessful drugs: they also promise to let a whole generation of new drugs bloom.