Complete the form below and we will email you a PDF version of "Prokaryotes vs Eukaryotes: What Are the Key Differences?"

Every living organism falls into one of two groups: eukaryotes or prokaryotes. Cellular structure determines which group an organism belongs to. In this article, we will explain in detail what prokaryotes and eukaryotes are and outline the differences between the two.

Prokaryotes are unicellular organisms that lack membrane-bound structures, the most noteworthy of which is the nucleus. Prokaryotic cells tend to be small, simple cells, measuring around 0.1-5 μm in diameter. 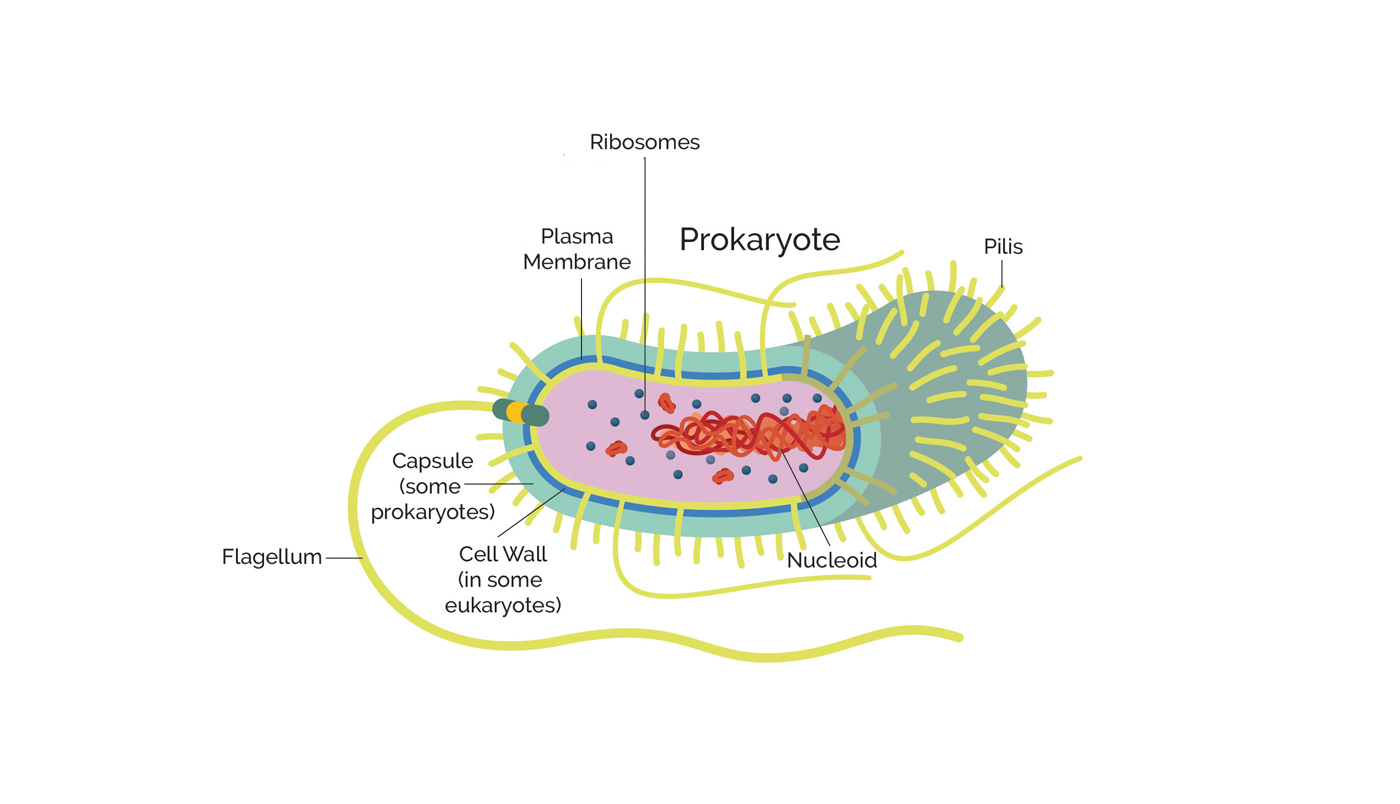 The key structures present in a prokaryote cell

While prokaryotic cells do not have membrane-bound structures, they do have distinct cellular regions. In prokaryotic cells, DNA bundles together in a region called the nucleoid. Prokaryotes can be split into two domains, bacteria nad archaea. In prokaryotes, molecules of protein, DNA and metabolites are all found together, floating in the cytoplasm. Primitive organelles, found in bacteria, do act as micro-compartments to bring some sense of organisation to the arrangement.

Here is a breakdown of what you might find in a prokaryotic bacterial cell.

Bacteria and archaea are the two types of prokaryotes.

Do prokaryotes have mitochondria?

No, prokaryotes do not have mitochondria. Mitochondria are only found in eukaryotic cells. This is also true of other membrane-bound structures like the nucleus and the Golgi apparatus (more on these later).

One theory for eukaryotic evolution hypothesizes that mitochondria were first prokaryotic cells that lived inside other cells. Over time, evolution led to these separate organisms functioning as a single organism in the form of a eukaryote.

Eukaryotes are organisms whose cells have a nucleus and other organelles enclosed by a plasma membrane. Organelles are internal structures responsible for a variety of functions, such as energy production and protein synthesis. 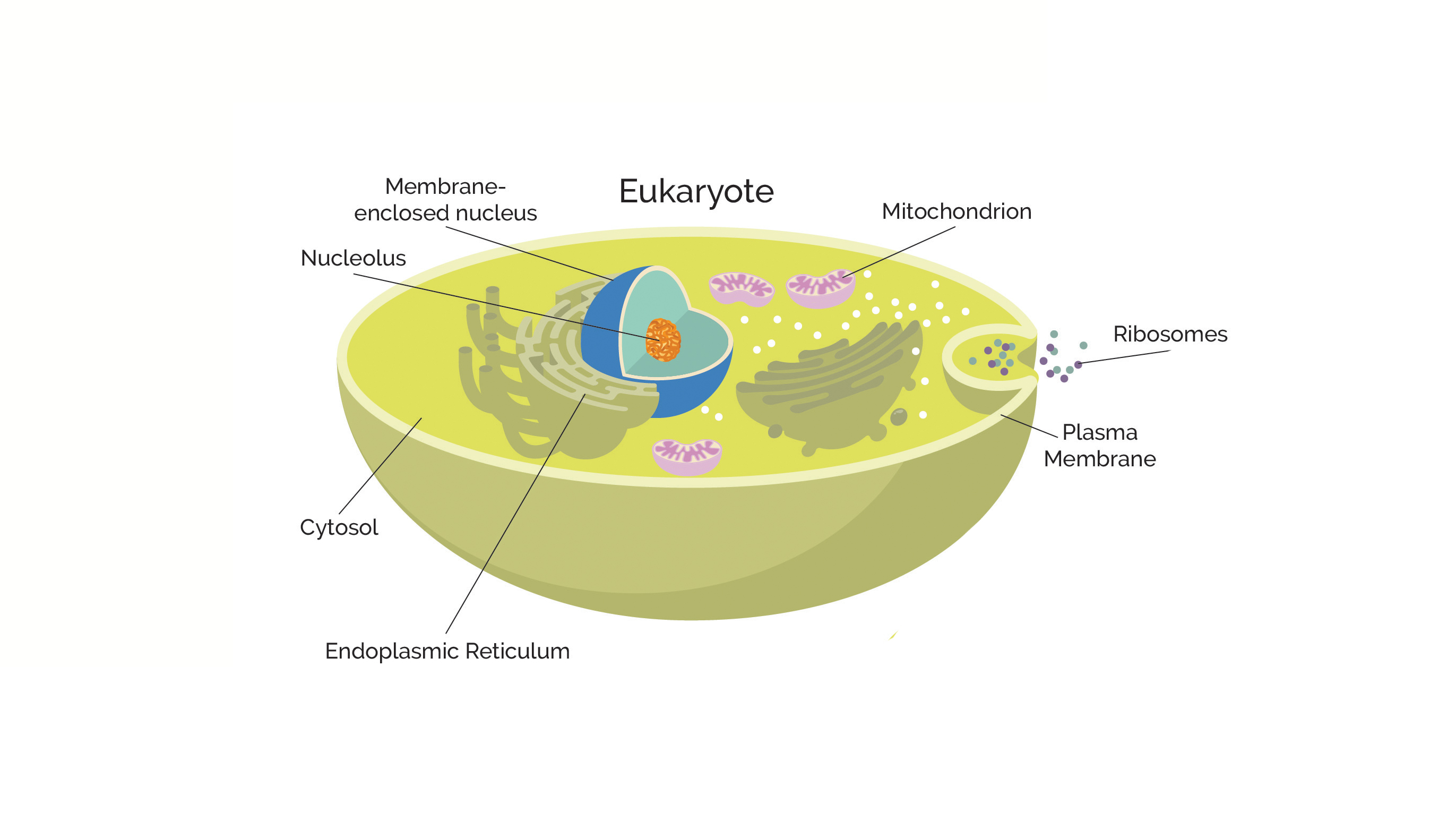 The key structures present in a eukaryote cell.

Eukaryotic cells are large (around 10-100 μm) and complex. While most eukaryotes are multicellular organisms, there are some single-cell eukaryotes.

Within a eukaryotic cell, each membrane-bound structure carries out specific cellular functions. Here is an overview of many of the primary components of eukaryotic cells.

Other common organelles found in many, but not all, eukaryotes include the Golgi apparatus, chloroplasts and lysosomes.

Animals, plants, fungi, algae and protozoans are all eukaryotes.

All life on Earth consists of either eukaryotic cells or prokaryotic cells. Prokaryotes were the first form of life. Scientists believe that eukaryotes evolved from prokaryotes around 2.7 billion years ago.

Key similarities between prokaryotes and eukaryotes 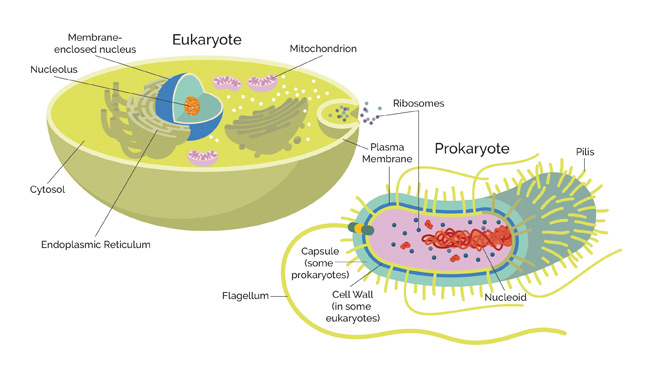 All cells, whether prokaryotic or eukaryotic, share these four features:

Transcription and translation in prokaryotes vs eukaryotes

What are the key differences between prokaryotes and eukaryotes?

Prokaryotes and eukaryotes vary in several important ways - these differences include structural variation - whether a nucleus is present or absent, and whether the cell has membrane-bound organelles, and molecular variation, including whether the DNA is in a circular or linear form. The differences are summarized in the table below.