Regenerative Medicine: Repairing Rather than Replacing

Regenerative Medicine: Repairing Rather than Replacing

Published: February 14, 2017
| By Angelo DePalma, Ph.D.
Culturing and expanding therapy-worthy cell populations has been a significant hurdle in the commercialization of regenerative medicine.
Read time:

Complete the form below and we will email you a PDF version of "Regenerative Medicine: Repairing Rather than Replacing"

Regenerative medicine is so closely aligned with developments in stem cells that separating the two topics is difficult. Two very long-term approaches involve the use of stem cells to replace and regrow tissues destroyed or damaged by disease, and the mechanical construction of tissues and organs outside the body by either growing stem (or primary) cells on inert scaffolds, or fabricating organ-like mechanically, for example by using inkjet-like devices.

These approaches are what most people think about when it comes to regenerative medicine. But alas, like interstellar space travel and world peace, these worthy goals are still far from realization. Most cell structuring techniques today, for example bioprinting, generate smallish tissue-like structures that are useful for screening drugs and toxins in living, physiologically relevant assay systems. 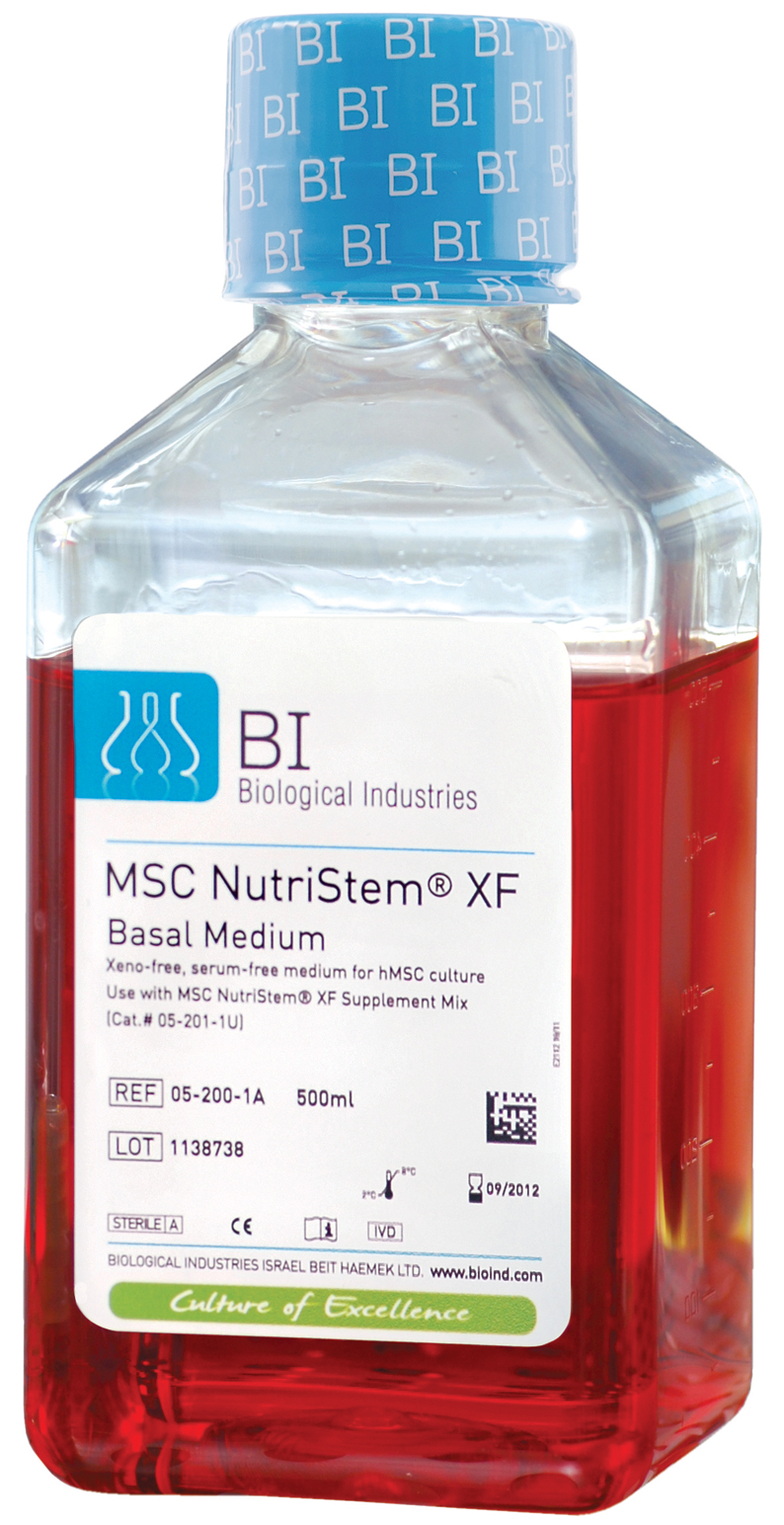 Amit Dror, CEO of NanoDimension, recognizes the potential for in vitro drug testing and in vivo pharmacology but is more cautious about regenerative medicine applications. “Generally, we do not target regenerative medicine as a primary mission,” he says, but does not rule out situations where 3D printed tissues could work alongside diseased organs until a suitable transplant organ might be found. This application might prevent deterioration that ends with dialysis and organ transplantation, particularly in patients who are prone to kidney damage, for example those taking medications with known kidney toxicity.

"3D printing of living cells is a technology that is already playing a significant role in medical research, but in order to reach its full potential, for the field to evolve further, there is a need to improve printing speeds, print resolution, cell control, and viability as well as cell availability and bio-ink technologies," Dror adds.

Stem Cells as “Instructors” for Healing

For now we must be content with stem cell healing strategies that do not involve the direct regeneration of somatic replacement cells from laboratory creations. Prof. Lawrence Goldstein of the University of California, San Diego, has recently begun work on using embryonic stem cells for rescuing and restoring nerve cells -- specifically motor neurons responsible for movement -- that are destroyed by amyotrophic lateral sclerosis (ALS). No effective treatments exist for this progressive neurodegenerative disease that leads to paralysis and respiratory failure.

Regenerative therapies, predominantly stem cell treatments, are the most promising approaches to treating ALS because once damaged nerve cells do not generally repair themselves, but the conditions underlying them persist.

Scientists have tried fetal neuronal stem cells, hematopoietic stem cells, and mesenchymal stem cells but results have not been promising. A 2016 landmark study conducted at Emory University employing spinal cord-derived stem cells could claim nothing more than tolerance for the treatment.

For some diseases -- for example artificial organs -- one thinks of stem cells as a source of new, healthy cells. Many scientists believe that for complex disorders like ALS, benefits from stem cells are more likely to arise from the cells’ providing trophic factors -- helper molecules that enhance neuronal health or function. Dr. Goldstein’s work spans these two ideas.

Goldstein’s choice of embryonic rather than induced pluripotent stem cells is based on safety. “Embryonic stem cell transplantation will require some immunosuppression whereas patient-derived iPSCs will not. Plus the genetic stability of iPSCs has not yet been established and more work has been done with ESCs.”

Taking this idea a step further (but still keeping an eye on motor neurons), a team at the Cedars-Sinai Medical Center (Los Angeles, CA), has recently received approval for transplantation of stem cells that have been genetically engineered to produce glial cell line derived neurotrophic factor, a protein that protects motor neurons and facilitates the flow of impulses from the brain or spinal cord to muscle.

Of great interest here is the potential to engineer stem cells -- either patient-derived or iPSCs -- to express several neurotrophic factors simultaneously and potentially protect or enhance several disease-promoting pathways with one treatment.

The cell engineering approach to treating neurodegenerative disorders can be taken a step further. Prof. Su-Chun Zhang at the University of Wisconsin, Madison has inserted a genetic switch into transplantable nerve cells to bring them under the control of pharmaceutical stimuli. The cells churn out the neurotransmitter dopamine, whose deficiency is a hallmark of Parkinson’s disease.

Dopamine replacement, a standard therapy for Parkinson’s disease, loses its effect over time. Stem cell scientists have investigated the transplantation of dopamine-releasing cells to control Parkinson’s symptoms but this treatment is ineffective because transplanted cells make either too much or too little of the neurotransmitter.

Zhang and coworkers began with hESCs and caused them to differentiate into dopamine-producing neurons. Next, using CRISPR gene-editing technology, he engineered a chemical receptor into the cells which responded to drugs that turn dopamine generation on and off.

The approach works in test animals but its implications are significant for other regenerative cell therapies involving the release of hormones or chemical messengers, for example diabetes. “If we are going to use cell therapy, we need to know what the transplanted cell will do. If its activity is not right, we may want to activate it, or we may need to slow or stop it.”

Cell-based therapies that induce tissue regeneration have become a major theme in regenerative medicine. Pluristem Therapeutics (Haifa, Israel) specializes in PLacental eXpanded (PLX) placenta-derived mesenchymal-like adherent stromal cells that may be administered without tissue or genetic matching. One placenta yields up to 20,000 doses of PLX cells. 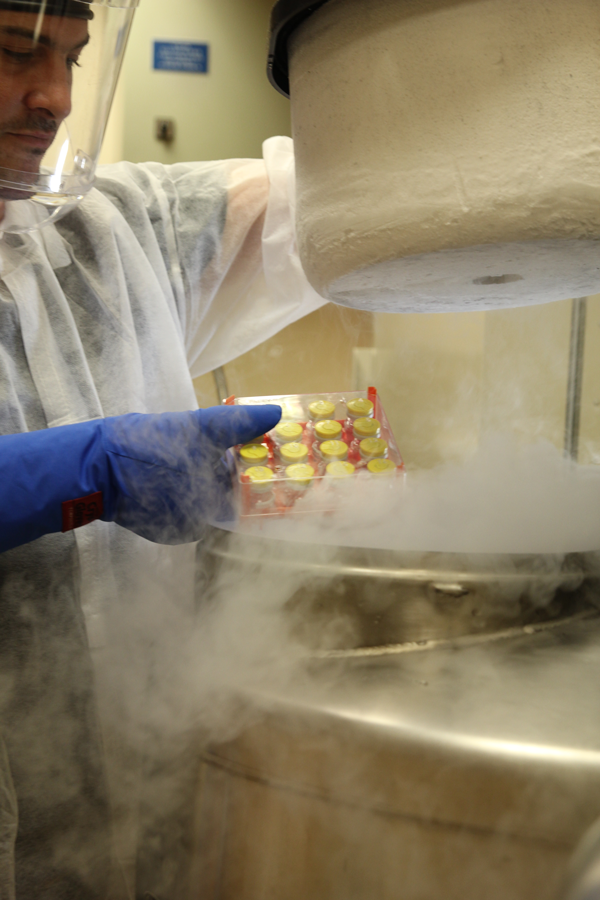 Industrialization of regenerative cell therapies will require long-term storage of stock cells. Here a scientist from Pluristem removes a bank of frozen cells from the deep freezer.

PLX cells are non-stem primitive cells, harvested at childbirth, that do not differentiate further. “They are the youngest, healthiest cells you can get,” comments Pluristem’s North American Divisional VP Karine Kleinhaus, M.D. PLX cells release chemical signals and growth factors that facilitate healing of damaged tissue by stimulating the body to repair itself. PLX cells are themselves stimulated by chemical distress signals from tissues damaged by inadequate blood flow, trauma, or inflammation.

“NIH has declared this to be the decade of the placenta, an ‘undiscovered’ organ with significant medical value,” Kleinhaus adds.

PLX-PAD cells also stimulate the immune system to promote healing. Unlike pharmacologic agents that promote one blood cell lineage, PLX-R18 cells respond to damaged blood cells to promote regeneration of red cells, disease-fighting white blood cells, and platelets. PLX-R18 is under clinical development to treat incomplete engraftment of transplanted hematopoietic cells and for acute radiation syndrome, through which radiation weakens the ability of the bone marrow to regenerate blood.

Tissue rejection is almost always an issue with allografts, including with embryonic stem cell transplants. Because they are immunologically privileged -- a mother’s immune system does not attack the fetus and vice versa -- placental cells entail no such risk. “PLX cells lack certain markers that the recipient recognizes as foreign,” Kleinhaus explains. “In fact the cells can dampen immune responses towards themselves.”

A recent study has shown that PLX cells dampen the TH-1 response, which is a measure of immunogenicity. And thus far more than two hundred patients have received PLX therapy with no severe rejection episodes reported.

PLX treatments are injected directly into muscle and do not migrate to damaged tissues. Instead they carry on a chemical “conversation” with stress signal proteins from damaged cells, the end result is recruitment of the body’s repair mechanisms.

PLX-AD is under late-stage clinical study for two indications. Critical limb ischemia, affecting 2.8 million patients in the  U.S. alone, is a life-threatening condition with poor treatment options. Eighteen percent of patients die within a year of diagnosis and 30% have amputations. Pluristem is preparing a phase 3 protocol for a trial in the repair of hip fractures.

PLX-R18 studies target hematopoietic recovery from acute radiation exposure. The product is unique among such agents, e.g. erythropoietin and colony-stimulating factors, which restore only red and white blood cells, respectively. PLX-R18 assists in recovery of red and white cells, plus platelets.

External control over stem cell activity adds several dimensions to what these agents are capable of in regenerative medicine. A fertilized egg gives rise to both embryonic cell types and those outside the embryo that form structural, support, and nutrient-delivering tissues. Such “totipotent” cells go on to form entire organisms as well as those non-embryonic structures that facilitate nutrient exchange between embryo and mother and that protect the embryo as it develops.

“A fertilized egg possesses full developmental potential, is able to generate all cell types required for embryo gestation, including the developing embryo and its extra-embryonic tissues,” explains Prof. Lin He, a cell biologist at the University of California, Berkeley. “By contrast, most embryonic and induced pluripotent stem cells are more restricted in their developmental potential.”

He found that the presence of a microRNA, miR-34a, which acts like a break on zygotes. In its presence cells develop only embryonic cell lineages. When miR-34a is blocked cells may develop into any cell associated with embryonic development.

MicroRNAs are non-coding RNAs that exert regulatory control over various cellular processes. He’s discovery opens up new approaches to the potential control of the fate of therapy-worthy stem cells, the ease with which they generate desired tissue types (e.g. heart, lung), and perhaps methods for generating specific pluripotent and totipotent stem cells in the first place.

The microRNA-stem cell connection could therefore broaden the tissue types that can be generated from stem cells, which will significantly raise the stakes for cell-based therapies in general and regenerative medicine in particular.

If regenerative medicine has taught us one lesson it is how little is understood about healing and human beings’ inherent self-regenerative capabilities. While outright cures are unlikely to emerge from today’s state of the art, current work at universities and entrepreneurial companies will eventually lead to advanced treatments that will likely incorporate combinations of tissue transplants, drugs, and genetic engineering.