Advances in combinatorial chemistry and molecular biology have facilitated the identification of an increased number of molecular targets and this has demanded the development of novel screening approaches.

This article highlights some of the different screening strategies used during drug discovery. Key advances and challenges associated with the techniques are also discussed.

High-throughput screening (HTS) is a process used routinely in early-stage drug discovery. HTS is used to detect “hit” molecules with activity against a target of interest, from large compound libraries that can comprise thousands of molecules. Once identified, these hit molecules are validated and refined to produce lead compounds with improved selectivity and potency which can be further tested to identify a potential drug candidate for preclinical testing. HTS involves the use of robotics, liquid/ microplate handling systems and microplate readers to detect, track and quantify the events. It also requires specialized software for instrumentation control and data processing.

Though a key tool, assessing drug properties such as toxicity and bioavailability may be a challenge with HTS. HTS is basically used to assist lead optimization – it may be seen as a fast scan of biological entities in which candidates with poor or negligible effect can be quickly excluded. 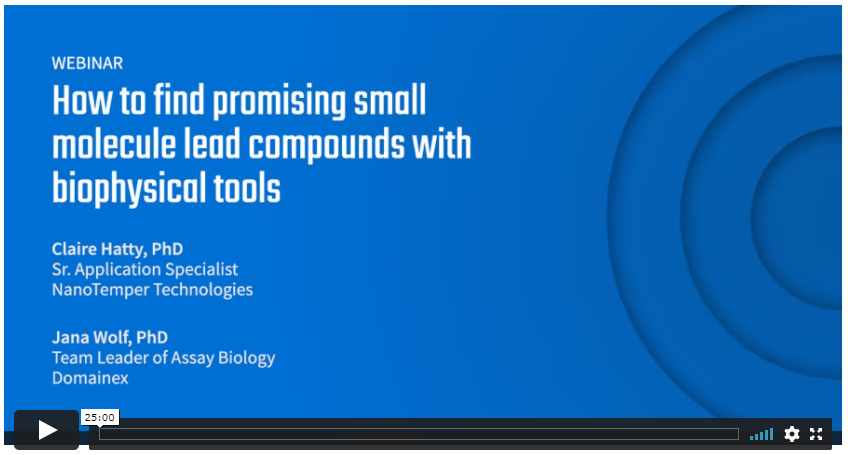 Learn how scientists in the drug discovery field search for the most promising lead compounds. Dr. Claire Hatty from NanoTemper will highlight case studies demonstrating the value of biophysical tools in drug discovery workflows. In the second half of the webinar, Dr. Jana Wolf from Domainex Ltd will explain how they apply these tools for their drug discovery projects. Watch this webinar to discover how one multifunctional set of tools can be exploited at various stages of early drug discovery and help to address key challenges.

High-content screening – Taking high-throughput screening to the next level

With HCS, multiple properties of individual cells or organisms can be studied at once. Automated microscopy, image processing and visualization tools are used in combination to extract data from cell populations. HCS typically involves fluorescence imaging of samples in a high-throughput format and provides quantitative reports on various specifics such as the spatial distribution of targets and individual cell and organelle morphology.

Most HCS is currently carried out using conventional or two-dimensional (2D) tissue culture. However, 3D cell culture models are also being explored. By increasing physiological relevance, 3D models are set to transform the HCS arena. “3D high-content screening with spheroids and organoids increases the physiological relevance and aims to reduce the high attrition rate in drug discovery”, notes Kriston-Vizi.

By using fragments, the complexity of the compounds being screened is reduced, allowing for more of the target’s binding site to be investigated (Figure 1). FBDD also acts as a great starting point to design lead compounds with greater ligand efficiency. FBDD thus allows a bottom-up approach through which a wider space can be investigated, which enables the development of higher affinity lead compounds with high specificity.