Kate Robinson is the editorial assistant at Technology Networks. She joined the team in 2021 after obtaining a bachelor's degree in biomedical sciences.
Learn about our editorial policies
Read time:

Complete the form below to unlock access to this Audio Article: "The Birth Control Burden May Soon Be Shared"

Safe and effective contraceptives were not produced until the 21st century, but a desire to control fertility has been around for many years. Medicinal records dating back to 1850 BCE show that people assigned female at birth (AFAB) would mix ingredients such as honey, acacia fruit and leaves, soak material or sponge in the mixture and insert into the genitals before intercourse in an effort to prevent conception. Other ingredients used in this practice included crocodile dung, olive oil and lemon. Across the globe liquid mercury, liquid lead and arsenic were consumed in an attempt to prevent pregnancy; these heavy metals however could also cause organ failure and death. The first recorded use of a condom, in the form of a goat bladder, was ~3000 BCE and records from ~1000 CE show that Egyptian people assigned male at birth (AMAB) used linen sheaths to cover their genitals during intercourse to prevent disease.

In this article we will explore a variety of contraceptives, their advantages and drawbacks, as well as emerging technologies and techniques that could improve contraceptive options and broaden their access.

Contraception can also be divided into long-term, short-term and permanent.

Although ~65% of people AFAB aged 15–49 years in the United States were reported to be using contraception in 2017–2019, no type of contraceptive is without drawbacks (Figure 1). In a global study, almost 35% of people discontinued their use of contraception due to method-related reasons (including side effects or health concerns) within 36 months of administration. Effectiveness of contraceptive methods can also be unclear, for example the contraceptive pill is 99.7% effective with perfect use, but 93% effective with “common use”. The increasing number of individuals who opt for surgical sterilization as a method of family planning, the high prevalence of abortions and the high rate of teenage pregnancy all suggest that additional contraceptive methods are needed and sought after.

As shown in Tables 1 and 2, the majority of contraceptives are designed to be used by those AFAB. Limited options are available to individuals AMAB: “Condoms, vasectomy, withdrawal and sexual intimacy without intercourse,” said Dr. David Turok, associate professor at the University of Utah Department of obstetrics and gynecology. Dr. Turok is also the Utah site principal investigator for an ongoing clinical trial currently recruiting couples to test a novel combination hormonal contraceptive gel on cisgender men.

He added, “There is a continuing need to develop new methods.” There are few options for cisgender men “to contribute to reducing pregnancy risk and adding one could make a huge difference. If both partners in a heterosexual relationship used a method, the combination would be extremely effective at preventing pregnancy.”

According to estimates made in 2017 by the World Health Organization, 214 million people AFAB in developing countries want to avoid pregnancy yet are not using a modern contraceptive method. Health concerns, side effects, problems with access and opposition from others are cited as reasons for this disuse. According to a study published in The Lancet, while there was an increase in prevalence of modern contraceptive use (from 23.9% in 2012 to 28.5% in 2017), overall use was far less than that of developed countries. For example, in the United States, 65.3% of people were using some form of contraceptive between 2017 and 2019 (see Figure 1). Many people also have limited access to contraceptives due to institutionalized racism, homophobia and transphobia.

On the topic of access to contraceptives, Dr. Erica Cahill, clinical assistant professor of obstetrics and gynecology, Stanford University, said, “The biggest factors are cost and availability. There are many studies showing that people choose different methods if they don’t have to consider cost. Policies like contraceptive coverage in the Affordable Care Act have made a huge improvement in access for many people.”

She continued, “Availability is critical too. This includes clinics having same-day availability of all methods including contraceptive implants. For equitable use of implants and IUDs, it is important to reduce reproductive coercion, as well as commit to removal of these implants whenever patients would like without having patients jump through hoops to justify removal prior to expiration.”

In 2018, the area of contraceptive research and development (R&D) that received the most funding was short-acting drugs and devices (approximately 22.5 million US dollars). In comparison, pancreatic cancer research received 259 million US dollars in 2018.

From January 2019 to 2022, there were only 17 industry-funded clinical trials focused on contraceptive development, a stark contrast to the 5024 trials in the field of cancer research.

Many multinational pharmaceutical companies abandoned both their hormonal and nonhormonal contraceptive R&D programs in the early 2000s. There are several challenges associated with developing a novel contraceptive that may deter investments in time and money by pharmaceutical companies. It is an expensive process, and the new methods need to be equally as safe and more effective than those currently available. Because contraceptives are given to healthy individuals, the tolerance for side effects is lower than for other drugs given to patients with a specific condition/disease. Also, in order to compete with other methods, new contraceptives need to cheap to produce to make them cost effective.

Side effects and suitability across hormonal and non-hormonal contraception

The first contraceptive pill was approved by the US Food and Drug Administration (FDA) in 1960 and contained 150 micrograms of an artificial estrogen called mestranol. This dose often led to side effects including breast pain, nausea and vomiting. While pharmaceutical companies have since developed pill formulations that combine lower levels of estrogen – typically about 20/30 micrograms – with progestin, some users still develop unpleasant side effects. People who take birth control that contains artificial estrogen are more likely than non-users to develop thrombosis (blood clots).

Reported side effects associated with hormonal contraceptive use include acne, depressed mood, decreased libido, headache, heavy and/or irregular menstruation, nausea and weight gain. Demographic and Health Surveys in 52 countries between 2005 and 2014 show that 20–33% of people AFAB reported not using contraception due to concerns surrounding side effects.

Some individuals cannot use hormonal methods of contraception (e.g., those with certain types of cancer or high blood pressure), and non-hormonal methods generally have fewer risks because, by definition, they don’t involve exposure to hormones. These methods however can still incur adverse side effects. For instance, the copper IUD can be associated with heavier, longer or more painful periods, possible infection as a result of fitting the IUD, pelvic inflammatory disease, uterine perforation and ectopic pregnancy. Other devices that sit in the vaginal canal such as diaphragms and condoms can cause irritation, dryness, rashes or allergies. 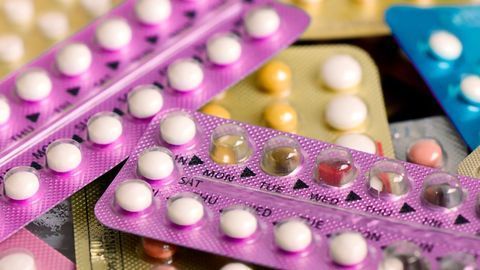 END_OF_DOCUMENT_TOKEN_TO_BE_REPLACED

The future of contraception

As demonstrated by the various issues associated with existing methods of contraception, there is a need to expand the options available. According to Cahill, the two key areas of contraceptive research that could be improved are “effective non-hormonal options and ‘on-demand’ or ‘only used at the time of intercourse’ options”.

“We haven’t seen a lot of novel methods in these spaces,” she noted.

However, there have been some options approved by the FDA in the last few years, including Phexxi®, which Cahill describes as “a non-hormonal vaginal gel that is different from spermicide in that it works by changing the pH of the vagina. It’s a great option for people seeking an on-demand method without any hormonal changes.”

Another recently approved contraceptive highlighted by Cahill is AnnoveraTM, a vaginal contraceptive ring containing progestin developed by the International Committee for Contraception Research. The ring can be used for an entire year and does not require refrigeration – particularly important for distribution and use in low-resource settings.

There are currently no FDA-approved contraceptives designed for those AMAB besides condoms. However there are some experimental options, both hormonal (a contraceptive pill) and non-hormonal (e.g., sperm-binding IgG antibodies) under clinical evaluation. An experimental non-hormonal contraceptive compound, known as YCT529, was recently found to be 99% effective when used in male mice to prevent pregnancy.

Turok explained how the contraceptive gel at the center of his clinical trial works: “The gel has two drugs in it. The first is Nesterone®, which signals to the brain to stop making gonadotropin-releasing hormone, follicle-stimulating hormone and luteinizing hormone, stopping sperm production. However, sperm can live for about two months [in the testes], so it takes about that long for the drug to be effective. Nesterone also blocks testosterone production. So, the second drug [in the gel] is testosterone, which is added back to maintain normal levels of that hormone.”

Gonadotropin-releasing hormone (GnRH) is released by the hypothalamus every one to three hours and stimulates the production of follicle-stimulating hormone from the pituitary gland in both AFAB and AMAB individuals.

Follicle-stimulating hormone (FSH) acts on the ovaries in AFAB persons to begin oocyte development and causes an increase in the level of estrogen, which in turn decreases FSH and increases luteinizing hormone levels. In AMAB persons, the level of FSH is regulated by testosterone and promotes the production of spermatozoa.

Luteinizing hormone (LH) assists in oocyte maturation and ovulation in those AFAB and stimulates testosterone production from the testes in AMAB individuals.

Progesterone is produced during ovulation by the corpus luteum (the formation of which is triggered by LH and prepares the endometrial tissue to allow for the implantation of a fertilized oocyte.

Testosterone is responsible for the regulation of FSH and production of spermatozoa.

Estrogens cause oocyte maturation, ovulation and thickening of the endometrial tissue.

By altering the levels of the above hormones using hormonal contraceptives, stages of the menstrual cycle or spermatozoa production can be interrupted, preventing reproduction.

He continues, “Nesterone works similarly to the pill, patch or vaginal ring... In both cases a synthetic, exogenous hormone tricks the brain into not making the hormones needed for reproduction.”

Cahill commented on the future of contraceptive research: “We’ve come a long way from thinking that people were choosing one lifetime method and would stop intermittently to conceive. We are also thinking much more about baseline fertility, types of partners (types of intercourse), menstrual cycles changes and desires, as well as time from stopping a contraceptive method to return to fertility.”

“We still have so much to learn about how different people metabolize and process drugs, as well as interactions between contraceptives and other drugs (including lubricants for methods like Phexxi). We are making some waves here with more studies factoring in obesity and other baseline biophysical factors, but we definitely need more of that,” concluded Cahill.