Michele Trott holds a PhD in endocrinology from Lincoln University. She works as a freelance science writer and scientific content manager for Izon Science.
Learn about our editorial policies
Credit: iStock
Read time:

Cell death balances division, in both multicellular and unicellular organisms. Programmed cell death shapes embryonic development and serves a protective role by maintaining homeostasis of cell number, and removing infected and damaged cells. Here, we examine one common branch of cell death, apoptosis, and explain why studying aberrations in apoptotic signaling is important for understanding and addressing a range of human pathologies. We also highlight techniques that enable studies of apoptosis.

Apoptosis, a phenomenon with wide-ranging implications

Apoptosis is a form of programmed cell death, whereby cells are systematically disassembled and cleared. Under physiological conditions, apoptotic cell clearance is generally immunologically silent, and avoids eliciting inflammation in the local tissue.1 Just like if you were to demolish your own house, you would do your best to leave your neighbors’ houses in-tact. The clearance of apoptotic cells involves the recruitment of phagocytic cells, which recognize and internalize cell corpses that are often the same size.1,2

Key observations were made as early as 1972, when Kerr et al. coined the term “apoptosis” and described the “active, inherently programmed phenomenon”.3 In addition to the mechanisms by which cells are disposed, apoptotic cells can be identified by the morphological features they exhibit, including: cytoplasmic shrinkage, chromatin condensation, nuclear fragmentation, and plasma membrane blebbing.4 Apoptotic cells fragment into membrane-bound small vesicles called apoptotic bodies, which are phagocytosed and degraded within lysosomes.5

Extrinsic apoptosis is induced by binding of a death ligand with the death receptor on a diseased cell (demonstrated in the animation below). In contrast, intrinsic apoptosis is initiated in response to cellular stress and depends on the activation of pro-death proteins (BAK or BAX) which form pores in the mitochondrial membrane. This is known as mitochondrial outer membrane permeabilization (MOMP), and it allows cytochrome c to be released from the mitochondria into the cytosol. Cytochrome c activates proteases and a signal cascade that results in the cell’s demolition.6,7


This animation explores the Fas signal transduction pathway that induces apoptosis. The animation was published in the journal Science (Molecular Animation of Cell Death Mediated by the Fas Pathway, Sci. STKE 2007 (380). Sourced from WEHI Movies.

Like Goldilocks, we don’t want too much or too little; inappropriate levels of apoptosis can be problematic for our health. Nearly half a century ago, Kerr and colleagues also recognized that apoptosis can be initiated and inhibited by a variety of stimuli, an observation which lies at the heart of today’s apoptosis-focused biomedical research. 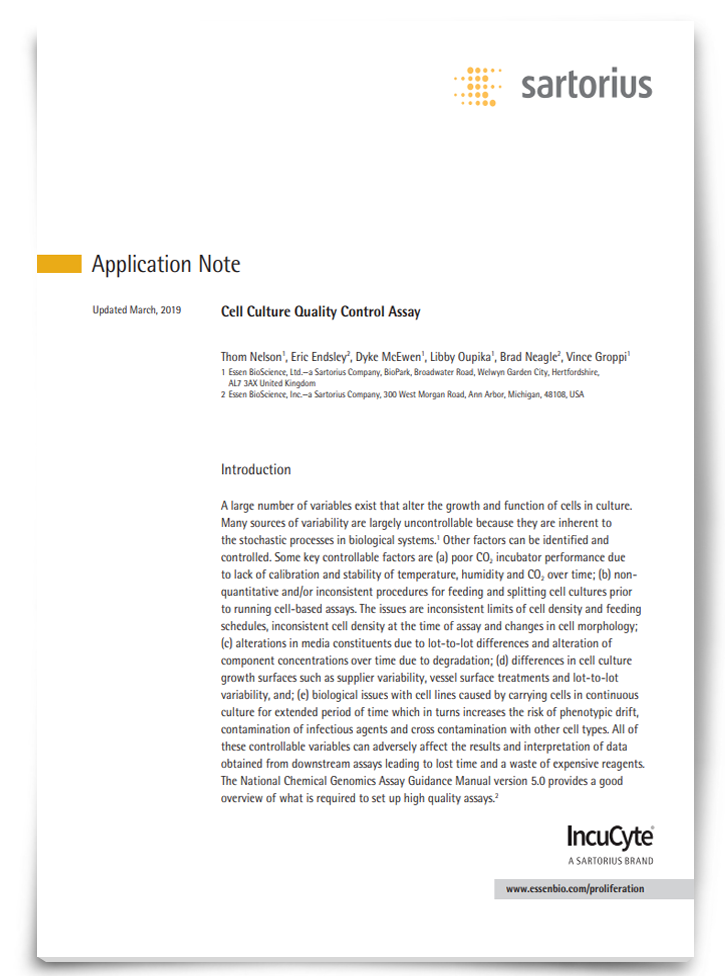 A large number of variables exist that alter the growth and function of cells in culture. Many sources of variability are largely uncontrollable because they are inherent to the stochastic processes in biological systems. Other factors can be identified and controlled. Therefore, it is important to be able to carefully document and monitor routine cell culture. Download this application note to discover how the IncuCyte can be used to analyze living cells.

Drug developers have been chasing the ability to manipulate apoptosis, and this has been achieved to some extent. For example, inducing cell death with small molecules is a clinically validated anti-cancer approach; Venetoclax is a drug approved for the treatment of chronic lymphocytic leukemia. Venetoclax acts by antagonizing BCL2, a pro-survival protein that binds and restrains pro-apoptotic proteins and the effectors of apoptosis.8 On the other hand, blocking apoptosis to prevent the death of healthy cells would conceivably be advantageous in settings of unwanted cell death, such as after a stroke, heart attack, or organ transplantation. However, efforts to prevent apoptosis in healthy cells have not been so successful.

Most efforts directed at blocking apoptosis have focused on targeting caspases. Although caspases are accelerators of apoptosis, it has since been recognized that caspases are not essential for cell death.9 Researchers from the Walter and Eliza Hall Institute of Medical Research (also home to the co-development of Venetoclax, in collaboration with industry partners) demonstrated that caspases act after cells have already committed to the critical step in apoptosis, and so chasing caspase inhibitors is fruitless. Professor Guillaume Lessene, Laboratory Head at the Walter and Eliza Hall Institute’s ACRF Chemical Biology division explains:

“We show that even if you block the activity of caspases, the cell eventually will die because too many things have happened. In particular, the mitochondria has been damaged. In contrast, our compounds act much earlier in the cell death pathway.”

Professor Lessene, together with Institute colleagues including Professor David Huang and Dr Mark van Delft, set out to find a new approach. This year, they reported in Nature Chemical Biology  the identification of a novel small molecule that can block an early step in intrinsic apoptosis in mouse embryonic fibroblasts (MEFs) and other cell types.10 Unlike caspase inhibitors, WEHI-9625 blocks apoptosis before cells reach a critical step in committing to apoptosis, as Lessene emphasizes:

“The most important message of the paper is that it’s possible to block apoptosis before the mitochondria is damaged. This was the central hypothesis at the start of the study.” WEHI-9625 augments the ability of VDAC2 (a mitochondrial protein) to inhibit mBAK function. Fueled with the confidence in knowing that blocking apoptosis upstream of mitochondrial damage is a feasible approach, the Walter and Eliza Hall team are already repeating the studies in human cells.

To discover small molecule inhibitors of apoptosis, the team aimed to find compounds that prevented the death of cells that were destined to die. MEFs lacking Mcl1 were exposed to ABT-737, a BH3 mimetic compound that triggers apoptosis through a specific pathway. A pool of nearly 250,000 compounds was narrowed down through a series of tests. First, phenotypic screening was used to identify compounds that induced the event they were looking for, i.e., inhibition of cell death. Lessene explains their approach:

Here, several techniques were used to identify cells that had been killed by ABT-737. A cell viability assay was used to determine the number of viable cells based on the amount of ATP present, which is proportionate to the number of metabolically active cells. Fluorescence activated cell sorting (FACS, a specialized type of flow cytometry) was another valuable tool, says Lessene:

“Markers from FACS are more indicative that the cell is almost dead because things are happening in the cellular membrane indicating that the integrity of the membrane is starting to be impacted. We use antibodies that are markers of proteins that are supposed to be inside the cell, but then they are recognized as being outside the cell – which means that the integrity of the cellular membrane has been damaged or impacted, and that’s a sign of cell death as well.”

Western blot was also used to detect cytochrome c, the release of which is an integral event preceding caspase activation.11

Despite the wealth of data that can be obtained from FACS, there are some inherent and limiting issues. For example, experiments must be terminated for FACS analysis to proceed, limiting experiments to producing static end-point data. Therefore, protocols for live-cell imaging are being sought to enable researchers to observe cellular functions in real time, avoiding the need for experiment termination. Associate Professor Ivan Poon, La Trobe Institute for Molecular Science, explains how time-lapse microscopy is beneficial in his apoptosis research:

“In addition to monitoring how apoptotic cells break apart by time-lapse microscopy, we can also examine how dying cells interact with healthy neighboring cells using the same technology.”

Time-lapse microscopy was critical to Poon’s favorite apoptosis-related discovery, whereby he and his team observed apoptotic monocytes generating thin membrane protrusions to aid their fragmentation.12 Described in the Nature Communications paper as “beads-on-a-string", the “beads” were observed as being sheared off the “string” to form apoptotic bodies. This mechanism is thought to facilitate efficient sorting of apoptotic bodies while excluding nuclear contents (the inclusion of which has been suggested to promote autoimmunity).13

Automation and a multidisciplinary approach are key

To identify new drug targets, researchers need to see how different cell death (and proliferation) pathways are affected by perturbants, at a single-cell and population level. Poon notes the importance of using multiple techniques in apoptosis research: “DNA fragmentation generally occurs during apoptosis and not during other forms of cell death such as necroptosis. Thus, it is a marker for apoptosis. However, it is important to keep in mind that there is a lot of cross-talk between different cell death pathways, thus, multiple different assays must be performed to determine the type of cell death. For example, using flow cytometry, time-lapse microscopy and other biochemical assays, as well as using inhibitors targeting certain pathways and cell lines/animal models deficient in key molecular regulators.”

To this point, Lessene emphasizes that the success of the Walter and Eliza Hall Institute’s research is down to years of work from a multidisciplinary team, including medicinal chemistry. Collectively, the advent of new high-throughput technologies demand automation and appropriate mathematical analyses that enable researchers to interpret and understand the molecular mechanisms of cell death. This in turn creates huge demand for new approaches to quality control, to ensure that the quality and reproducibility of cell-based assays are upheld.

Michele Trott, PhD
More from this author >
Advertisement
Chosen for You
Article