Tracking the Heritability of Cell Stress

Tracking the Heritability of Cell Stress

Exposure of cells to environmental stresses such as temperature or nutrient limitation can result in the activation of a number of genes. In Saccharomyces cerevisiae for example, stress can alter the expression of almost 900 genes. However, while the extent of the response can vary between cell populations, the mechanisms behind these differences are not well understood.

As part of work recently published in Science Advances, a team of researchers from the Institute of Systems Biology at Yale University, demonstrated that single cells preserve a memory of their mother's dynamic response to glucose limitation stress for multiple generations. We spoke to lead author, Dr Meenakshi Chatterjee, to learn more about the study and its wider implications.

Anna MacDonald (AM): What led you to investigate the heritability of stress response in cells?

Dr Meenakshi Chatterjee (MC): Often, biologists may focus on molecular responses derived from population averages, rather than investigate single cells which could have variabilities of their own. However, understanding the dynamical and heterogenous nature of regulatory processes governing adaptation in biological systems requires performing single cell measurements to incorporate the knowledge of variability between cells as well as in the same cell over time. Indeed, exciting new advances in time-lapse microscopy and single cell analysis platforms have begun to provide a direct view of variations within and between single cells. Here, by developing a microfluidic platform to track families of single cells and building a mathematical model of stress response, we could not only investigate cellular variations in a stressful environment, but also understand if these variations are potentially influenced by heritability of cellular responses.

AM: Can you give us an overview of your study and findings?

MC: In this work, we studied signal processing strategies implemented by live single cells in response to stress, by engineering tools and platforms like building a microfluidic device and developing a novel image processing algorithm. Using these platforms in conjunction with time-lapse microscopy, we then tracked the stress response of families of single cells over multiple generations. Yeast is a good model organism for this purpose: it divides rapidly (approximately after every 2 hours) making it feasible to study many cell generations.  Analyzing these stress signals (here glucose limitation stress) using analytical methodologies borrowed from electrical engineering, we found that single yeast cells preserve the memory of their mother’s dynamic stress response pattern for multiple generations, and finally developed a mathematical model to predict stress outcomes in single cells. The interdisciplinary nature of our work is an example of how systems levels experimental design can come together with computational and analytical methods to bridge the gap in our understanding of how evolution may have acted to optimize fitness in stressful environments.

AM: Can you tell us more about the new nuclear-marker free method you developed for MSn2 nuclear localization, and some of the advantages it brings?

MC: Here, we investigated the nuclear localization dynamics of a stress responsive transcription factor named Msn2, as a readout for stress response. In presence of stress, Msn2 shuttles to the nucleus of the cell from the cytoplasm. To quantify the Msn2 nuclear localization intensities in a cell, we developed an algorithm to estimate Msn2 nuclear localization indirectly from the pixel intensities of the fluorescent marker in the whole cell, without directly using a nuclear marker. This approach allowed us to minimize phototoxicity on cells and ensured that cells grew in a healthy fashion over the long-time scales needed for lineage tracking. The algorithm integrated information from both spatial location and intensity of the fluorescent marker pixels in the whole cell and showed significant improvement in accuracy and resolving power than contemporary algorithms.

MC: This could mean that cells tune the degree and complexity of their molecular changes through epigenetic inheritance for adaptation of successive generations in response to harsh environments.

Our study will have medical consequences - heterogeneity of cellular responses and/or presence of 'cellular memory' can be important in understanding the sensitivity of cells to certain drug types. This would pave the way for novel methods to manipulate cell fate.

MC: Future work will aim to address the mechanistic underpinnings of the stress-specific inheritance through experimental validation. Future experiments will involve manipulation of stress sensitive genetic circuits to understand how the interaction between its different molecular components could possibly mount the observed cellular response. 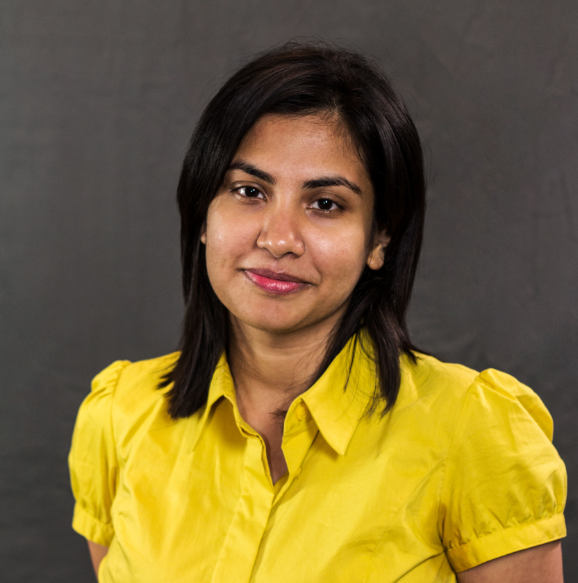 Meenakshi Chatterjee is currently a researcher in Discovery Sciences at Janssen Research & Development, Johnson & Johnson. She works on identifying novel biomarkers for drug discovery, with applications in healthcare and precision medicine using machine learning and signal processing based methodologies. She received her PhD in Electrical Engineering from Yale University. As a Pierre W. Hoge Fellow, she conducted her thesis research at the Systems Biology Institute in Yale, where she engineered microfluidic devices and performed quantitative modeling to predict stress outcomes in live single cells.