What are progenitor cells?

Every cell in the human body, and that of other mammals, originates from stem cell precursors. Progenitor cells are descendants of stem cells that then further differentiate to create specialized cell types. 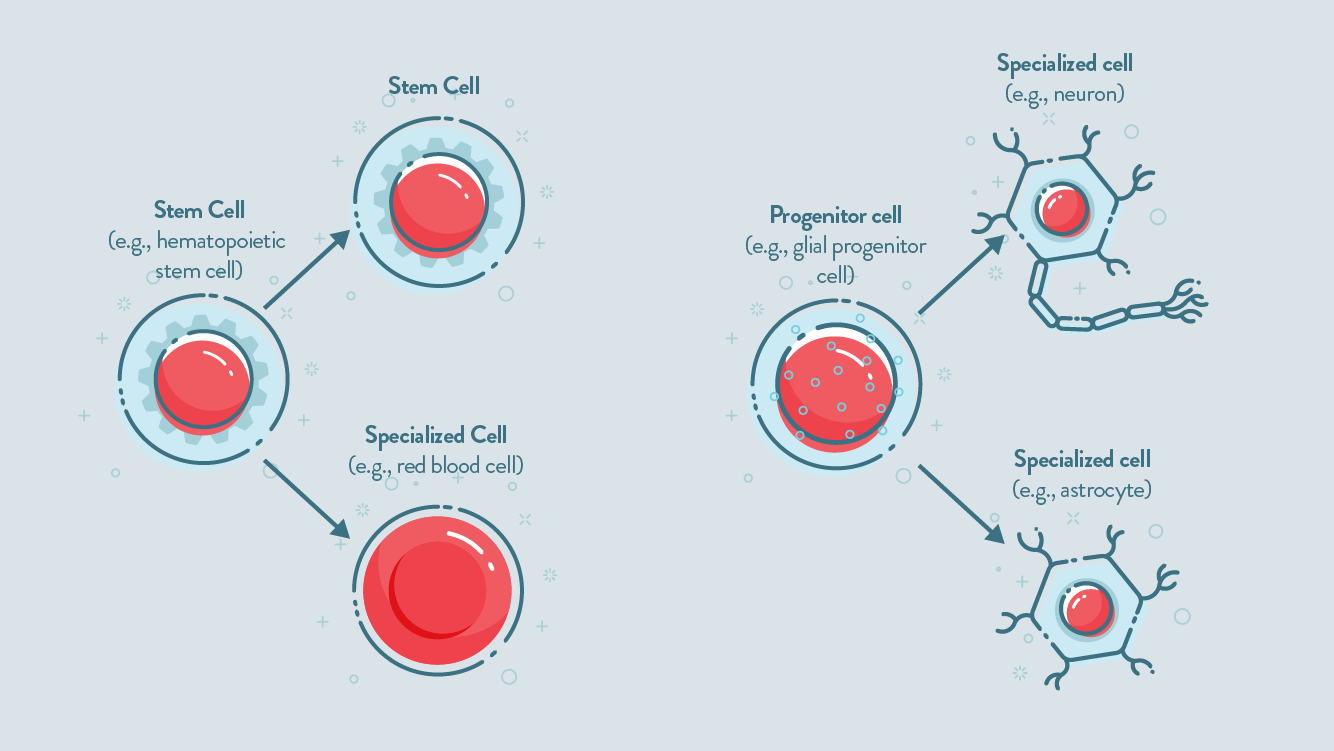 Whilst stem cells have indefinite replication (left) progenitor cells can at most differentiate into multiple types of specialized cell (right).

Progenitor cells are an intermediary step involved in the creation of mature cells in human tissues and organs, the blood, and the central nervous system.

Every neuron, oligodendrocyte and astrocyte in the CNS evolves from the differentiation of neural progenitor cells (NPCs). NPCs themselves are produced by multipotent neural stem cells (NSCs). Both NPCs and NSCs are termed neural precursor cells.

Before the 1990s, it was believed that neurogenesis terminated early in life. More recent studies demonstrate that the brain contains stem cells that are capable of regenerating neurons and glial cells throughout the human lifecycle. These stem cells have only been found in certain brain regions, including the striatum and lateral ventricle.

Hematopoietic progenitor cells are categorized based upon their cell potency, or their differentiation potential. As blood cells develop, their potency decreases.

Myeloid progenitor cells are precursors to the following types of blood cells:

Lymphoid progenitor cells (also known as lymphoblasts) are precursors to other mature blood cell types, including:

Uses of progenitor cells in medicine

Neural progenitor cells (NPCs) are being explored alongside neural stem cells for their potential to treat diseases of or injury to the central nervous system. A deeper understanding of how these cells function on a cellular and molecular basis is needed to progress from early experimental research to therapeutic use.

NPCs are currently utilized in research conducted on CNS disorders, development, cell regeneration and degeneration, neuronal excitability, and therapy screening. When compared to induced pluripotent stem cells, which are cells reprogrammed into a pluripotent state, NPCs can cut down on time in some experiments.

Hematopoietic progenitor cells and stem cells are being researched for their capacity to treat blood cell disorders. They are also currently used to help treat patients with a variety of malignant and non-malignant diseases via bone marrow transplants that deliver bone marrow and peripheral blood progenitor cells to patients. These procedures can assist patients in recovering from the damage caused by chemotherapy.

Additionally, researchers are examining the potential of using progenitor cells to create a variety of tissues, such as blood vessels, heart valves, and electrically conductive tissue for the cardiovascular system.