Complete the form below and we will email you a PDF version of "What Are Totipotent Stem Cells?"

Stem cells are characterized according to their degree of potency, which refers to their varying ability to differentiate into different cell types. Totipotent cells are the most potent of all stem cells, and defining them is important for research and the field of regenerative medicine.

There are two definitions of totipotent stem cells, which reflects the inherent technical difficulty that lies in characterizing them1:

The original test of totipotency was performed in mice by Tarkowski (1959)2, who isolated a single blastomere (cells created by divisions of the zygote, consisting of 2–16 cells), placed it into an empty zona pellucida, and monitored its development into live born young.

This approach is not bulletproof; the failure of blastomeres to support chimera development may indicate limitations related to the reconstructed embryo, rather than restricted development potential of the cell in question.

It is for this reason that the second, less stringent definition of totipotency is also widely used.

Having two definitions inevitably creates confusion, particularly as the term “totipotency” is often used inappropriately in the literature. It has been argued that this creates unnecessary ethical controversy with practical and political implications.3

Sometimes the term “totipotent” is awarded to cells if they merely participate in an embryonic process – however, this doesn’t mean that they necessarily could give rise to an organism. Other common causes for misclassification include assuming the expression of early embryonic markers to mean totipotency, and taking partial or superficial resemblance to an embryo as evidence for totipotency.3

Totipotent stem cells differ from pluripotent cells, which can differentiate into cells from any of the three germ layers, and multipotent cells which are less potent.

Why the fuss about totipotent stem cells?

Stem cells are increasingly being used as model systems in research. Differentiating between stem cell types relies on an understanding of the embryological roadmaps and the factors that define their pathways.

The diploid zygote cell is totipotent. Totipotent cells also exist in subsequent divisions of the zygote, before the rise of the trophectoderm lineage (which occurs approximately four days after fertilization, depending on the species).

To understand the origin of totipotent stem cells, it helps to be familiar with the early stages of embryonic development, and the related terminology.

The table below highlights the important stages of early embryonic development and demonstrates the defining point at which totipotent stem cell no longer exist, and pluripotent cells arise. 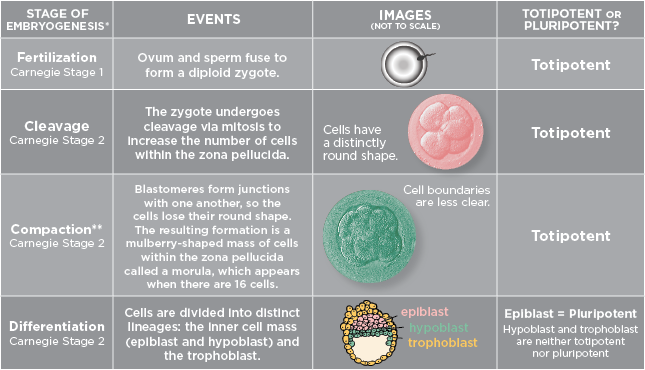 *To provide a unified developmental chronology of mammalian embryology, the Carnegie Institution for Science developed a set of 23 stages known as the “Carnegie stages” whereby stages are defined by morphological development, and not directly by age or size.
**note: the number of cells at compaction varies between mammalian species

When does a totipotent stem cell change?

Totipotent cells cease to exist around the time of the formation of the inner cell mass, when the trophectoderm lineage is established.1 Totipotent stem cells will divide and differentiate to give rise to cells that will develop into one of the three germ layers:

Blastomere: Cells created by divisions of the zygote, consisting of 2–16 cells
Chimera: An organism composed of a mixture of different cell populations that derive from more than one zygote (either from the same or different species). Can be formed by different processes, such as the mixing of early embryos or the grafting of tissues from different stages of development.
Corpus luteum: Endocrine structure that develops from an ovarian follicle once the oocyte has been released
Diploid: Having two sets of chromosomes (total of 46 in humans), with one member of each chromosome pair derived from the ovum, and one from the sperm. Ovum and sperm cells are haploid as they each have 23 chromosomes.
Germline: Cells that develop into sperm or oocytes
Primitive endoderm: The yolk sac derived from hypoblasts
Somatic lineages: All cells in the body, excluding the germ cells
Trophectoderm lineage: Cell lineage which gives rise to the trophoblast of the placenta, and provides support to the inner cell mass
Zona pellucida: Extracellular coat that surrounds the mammalian oocyte, crucial for fertilization
Zygote: diploid cell which results from the fusion of a sperm and ovum

Efforts have been made to establish methods to stabilize or create cells with an expanded developmental potential, relative to established lines of embryonic stem cells.
Through this work, typically in mice, researchers have found a few pieces of the totipotency puzzle.7 This has partly been achieved by analyzing the gene regulatory network that is active at the earliest stages of mammalian embryogenesis, and screening chemicals for their ability to modulate stem cell gene expression.
As it is impractical to assess totipotency in cells using the aforementioned gold standard in every instance (by transferring a blastomere to an empty zona pellucida, transferring it to a mother and seeing if it supports the development and birth of live young), some relevant measures and criteria have been established. These methods are based on characteristics specific to early developmental stages:

Gene expression should be characteristic of the appropriate stage of development, e.g.:

Chromatin (the complexes of histones and DNA that condense to form chromosomes) mobility is higher in totipotent cells than in pluripotent cells, and chromatin dynamics seem to underlie changes in cellular plasticity.10

Totipotent cells should have the ability to differentiate in vitro into cells representative of the three embryonic germ layers, as well as the trophectoderm, primitive endoderm and their derivatives.1

It has been noted that while some cells may pass several tests of totipotency, those which are “artificially” induced may not actually have a normal developmental counterpart.

EPSCs have been established in mice from individual eight-cell blastomeres, and have also been converted from mouse embryonic stem cells and induced pluripotent stem cells.11 This protocol has been described in detail12 and the conversion takes approximately 2–3 weeks in each case.

Characterizing totipotent stem cells presents many challenges, and it remains to be seen whether artificially induced totipotent cells could be maintained in isolation.

However, given that other cell lines can be derived from EPSCs, and the huge potential of regenerative medicine in biotechnology and medicine, it is likely that refining the criteria for totipotency will remain a high priority for the field.

Complete the form below to unlock access to this Audio Article: "What Are Totipotent Stem Cells?"

Michele Trott, PhD
More from this author >
Advertisement
Chosen for You
Whitepaper