A Microfluidic Approach to Gene Delivery in GMCT

Gene-modified cell therapies (GMCTs) offer the potential to alleviate symptoms of – or potentially cure – an array of diseases. Unlike traditional therapeutics, GMCTs are created from patient donor cells which have been modified to introduce novel genetic material. This material adds to the cell's capabilities in fighting disease, by instructing immune cells to target cells they previously wouldn't, for example.

The development of GMCTs has been halted by issues surrounding the most critical step in their creation, the introduction of the genetic material. Typically, engineered viruses have been adopted here, however there is demand for non-viral alternatives due to issues surrounding cost and logistics.

Recently, Indee Labs announced the publication of a study illustrating the efficacy of it's GMCT development and manufacturing technology in Nature's Scientific Reports. We spoke with Indee Labs' CEO Ryan Pawell to learn more about the technology and its applications.

Laura Lansdowne (LL): What is GMCT and how are GMCTs currently developed? What challenges are associated with these methods?

Ryan Pawell (RP): GMCTs are a new generation of therapeutics that utilize a patient’s own immune cells. Typically, immune cells are taken from a patient and modified by introducing genetic material via transfection or intracellular delivery. This can engineer the immune cells to target cells they wouldn’t previously, such as cancer cells. The first GMCTs represent the most effective therapeutic platform for many patients with advanced diseases including relapsed and refractory leukemia, non-Hodgkin lymphoma, and other blood cancers1. Specifically, chimeric antigen receptor T cell (CAR-T) therapies targeting CD19 have demonstrated remarkable responses and possibly cures in patients with advanced acute lymphoblastic leukemia (ALL) that were unresponsive to all prior therapies. Gene modified CAR-T cells are the first cellular therapy to gain FDA approval for the treatment of cancer following demonstration of an 83% remission rate in ALL2.

CAR-T cells are generated via genetic modification of human T cells to display an extracellular antibody single-chain variable fragment (scFv) linked to a hinge region, one or more costimulatory domain(s), and an intracellular activating domain. 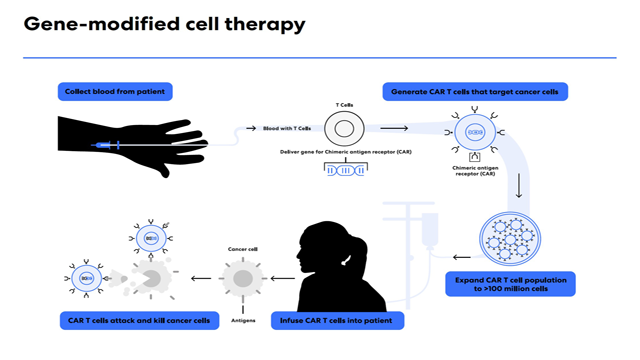 Figure 1: Overview of the gene-modified cell therapy manufacturing process, involving:  (1) collecting blood from a donor or patients, (2) delivering genetic constructs to T cells to (3) generate chimeric antigen receptor T cells or CAR-T, (4) expanding out the CAR-T cells to therapeutic doses to (5) infuse the CAR-T dose into a patient so (5) the CAR-T cells attack and kill cancer cells. Courtesy of Indee Labs.

The most problematic step in GMCT manufacturing is the intracellular delivery of nucleic acids via transfection or transduction for expression of the CAR by the T cell. Viral transduction using lentiviruses is the method currently used to generate CAR-T therapies for clinical trials. However, these methods require significant hands-on time during production and require extensive intra- and post-production safety testing to avoid infusion of replication competent viruses at the time of therapy administration3,4.

Molly Campbell (MC): Why is it important to develop alternatives to using engineered viruses for delivering new genes into cells?

RP: The manufacturing process using engineered viruses is slow, expensive, problematic, and cannot be scaled to provide treatments for all patients who will need GMCTs in the future.

The clinical and commercial standards for GMCT manufacturing require the use of viruses which is time consuming, labor intensive, expensive, and requires extensive and highly variable lead times3. In addition, virally synthesized GMCTs require significant safety, regulatory and release requirements, and strict monitoring of patients for up to 15 years after treatment4.

Non-viral based delivery is an attractive alternative to viral GMCT manufacturing as it permits the intracellular delivery of a variety of nucleic acid constructs (DNA, RNA) and macromolecules (protein, protein complexes) into cells for permanent, persistent, or transient modification5. Further, these methods provide additional advantages over the current standard including reduced costs, ease to scale, and substantially shorter lead times5. Electroporation has also been shown to adversely affect the in vivo function of engineered or modified T cells6.

LL: Could you tell us more about your microfluidic technology and its influence on gene-modified cell therapy (GMCT) development and manufacturing?

RP: There are several practical metrics when considering intracellular delivery for GMCT development and manufacturing, including:

(5) maintenance of normal or desired cell state and function.

Indee Labs is the first to apply microfluidic vortex shedding (µVS) to gene delivery, where the fluid forces or hydrodynamic conditions created during µVS are used to gently and temporarily porate the cell membrane, allowing for gene delivery in a novel manner.

Figure 2: Overview of how microfluidic vortex shedding (µVS) enables gene delivery. The steps involve:  (1) cells and genes are mixed in suspension, (2) the suspension is driven through a microscopic post array with compressed gas to create vortices, (3) the vortices disrupt the cell membrane, (4) genes are delivered into the cell due to a permeabilized cell membrane and (5) the cell recovers. Courtesy of Indee Labs.

Specifically, these microfluidic devices use a tiny array of posts to induce a well-known fluid dynamics phenomenon called vortex shedding. You can observe vortex shedding in nature by watching as clouds drift past mountains or as streams flow past rocks and boulders. Microfluidic vortex shedding has also been used to mix fluids -- we are simply the first to apply this to transfection or gene delivery and own granted patents as a result.

We have optimized our platform for enhanced green fluorescent protein (EGFP) mRNA delivery to human pan T cells9. We demonstrate µVS results in:

Now, we are developing a user-friendly µVS instrument for research then clinical use in partnership with the Westmead Institute for Medical Research and funded by NSW Health.

These µVS devices have the potential to completely eliminate the two primary barriers to widespread gene-modified cell therapy: cost and scalability. The device may also reduce or even eliminate many of the challenges described above while also improving therapeutic efficacy.

RP: Monitoring damage to genetic material is something we do as a matter of routine.

Processing cells with our µVS technology has little to no effect to the normal cell state/ cell function and has little effect on cells at the genetic level, as determined by global gene expression changes. Our preliminary data from bulk sequencing of more than 213,000 unique transcript reads across 71,000 genes shows negligible changes to gene expression patterns in cells processed with µVS.

LL: What impact could this microfluidic technology have when it comes to treating patients with advanced cancer?

RP: It will reduce the cost and other risks associated with the therapy, but more importantly it will reduce the time a patient needs to wait (after their cells are extracted) for the treatment to be made. This is most important for patients with aggressive conditions, who may not have more than a few weeks to live. Additionally, our data demonstrating maintenance of the T cell state indicates GMCTs made with µVS will be more effective in vivo.

MC: In addition to cancer treatment, what other applications may GMCT have? Are there plans to explore the use of the novel microfluidic technology in any other disease areas?

RP: According to the Alliance for Regenerative Medicine (ARM), 58% of clinical trial recorded by ARM are being developed to treat cancer10. The remainder are designed to treat other conditions such as rare diseases or autoimmune conditions. Beyond humans, there are also many research institutions and therapeutic companies looking into the use of GMCTs for animal disease and agriculture. µVS is a platform technology that can be used for gene delivery for all potential applications of GMCTs.