Anna is a science writer at Technology Networks. She holds a first-class honours degree in biological sciences from the University of East Anglia, before joining Technology Networks she helped organize scientific conferences.
Learn about our editorial policies
Credit: Pixabay

The first functional stem-cell derived neuromuscular junction model has recently been licensed, which could help the quest to develop new drugs to treat associated neurodegenerative diseases. We caught up with James Hickman, CSO, Hesperos, to learn more about the microfluidic model, and some of the benefits it brings.

Anna MacDonald (AM): What is the function of neuromuscular junctions, and why are they an important system to study?

James Hickman (JH): Neuromuscular junction (NMJ) is the synaptic connection between motoneurons and skeletal muscle. It is an important system to study because it is critical for our ability to move: motoneurons control the activity of skeletal muscles through NMJs. Any impairment of NMJ can cause motor deficits, which has been found in diseases such as amyotrophic lateral sclerosis (ALS) and myasthenia gravis.

AM: What are some of the challenges of studying NMJs, and limitations of current methods?

James Hickman: It has been challenging to study NMJs because there have been no efficient human-based in vitro NMJ models, nor any functional platforms that allow chronic (long-term) monitoring and analyzing NMJ function at high resolution.

It has been difficult to create such systems because the formation of NMJs is a very articulated process that requires the integrity of both motoneurons and skeletal muscles, as well as the proper interactions between them. It requires well-designed cell culture conditions to reproduce this process in vitro.

Currently, there are very limited selections of human-based NMJ models in which motoneuron stimulation can induce muscle contraction. Further, NMJ function has been analyzed by activating motoneurons with glutamate or optogenetics while monitoring muscle excitation by calcium imaging or patch clamp. These are very invasive, labor-intensive methods, and can have low temporal resolution.

AM: Can you tell us about the recently developed BioMEMs platform, and the benefits it can bring?

James Hickman: In our recently developed BioMEMs platform, motoneurons and muscle cells derived from human stem cells are partitioned in isolated PDMS chambers, separated by microtunnels that only allow motor axons to cross though. NMJ function is analyzed by stimulating motoneurons electrically, and muscle contractions are monitored with phase imaging differentials. 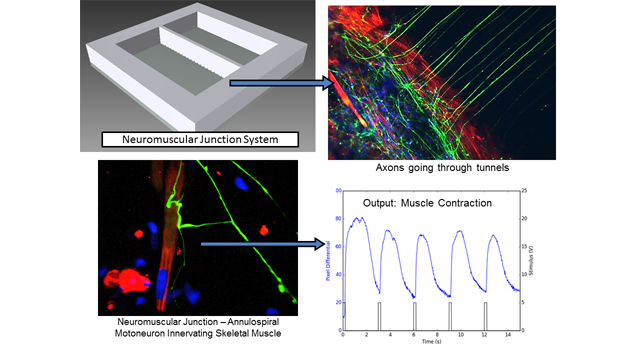 AM: How is the platform being used to advance drug testing?

James Hickman: This system allows evaluation of dose response of drugs due to its high resolution in functional testing. In addition, because of the physical and electrical isolation of motoneurons and skeletal muscles in PDMS chambers, this system also allows the drug target analysis by applying the drug to correspondent chambers, but most importantly, because it is non-invasive it can be used to measure chronic effects.

James Hickman: We will be adapting the platform to additional disease models, which can then be applied to drug screening or etiological study. There may also be applications for precision medicine, by introducing motoneurons or muscle derived from patient iPSCs.