Molecular ‘Lock and Key’ for Potential Control of GMOs

Molecular ‘Lock and Key’ for Potential Control of GMOs

The method involves a series of genetic mutations that render the microbe inactive unless the right molecule is added to enable its viability. 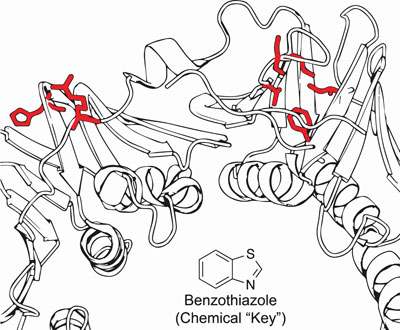 The researchers used the chemical benzothiazole as a molecular key to activate essential genes in bacteria. The red highlights the areas targeted for mutation. The method demonstrates a cheap, easy technique that could be used for the biocontainment of genetically modified organisms. (Image by Gabriel Lopez).

The researchers worked with a strain of E.coli commonly used in research labs, targeting five genes that are required for the organism to survive and devising easy ways to modify them. They created mutations in the genes that would require the addition of the molecule benzothiazole in order to function.

“This approach is very robust and simple in that it only requires a few mutations in the genome,” said Anderson. “The molecule serves as the key, and we engineer the lock.”

Study lead author Gabriel Lopez, who started the project as a UC Berkeley graduate student in bioengineering, compared the approach to taking out a component in a car.

“The car would still run if it lost its rear-view mirror, but it wouldn’t go far without the camshaft or fuel tank,” said Lopez, now a postdoctoral researcher in Anderson’s lab. “Organisms are the same. Some parts are essential, and some aren’t. Of the 4,000 genes in E.coli, about 300 are essential to its survival. What we’re doing is putting an ignition switch onto a handful of the bacteria’s essential genes. Without the right key, the bug won’t live.”

The technique turns the bacteria into a synthetic auxotroph, an organism modified to require a particular compound for its growth. It could potentially be applied to organisms being engineered to treat diseases, the researchers said. Because those pharmaceuticals entail the introduction of organisms into the body, mechanisms are needed to ensure that the organism is activated only when needed.

Lopez said they added redundancy in the system by adding several lock-and-key combinations into one organism. Switching on a single gene improved viability 100 millionfold, and combining several gene locks resulted in a 10 billionfold increase in viability, according to the study.

“This is just one instance of how you can do it, but my hope is that people will see this and realize we can use this lock-and-key approach with other proteins and other organisms,” said Lopez.

The researchers noted that other approaches to biocontainment rely upon a “kill switch” that poisons an organism. The concern, they said is that the organism may evolve a way to survive that signal. They noted that in their approach, the default state of their organism is death, and that researchers must actively turn on the genes to enable its survival. They distinguished their approach as being fast, cheap and easy to deploy, having been demonstrated in an industrially relevant organism.

The inspiration came from techniques dating back to the 1940s, when early biochemists were researching the conditions that would enable microbes to live or die. Biologists discovered that mutating the genes of mold could alter their sensitivity to pH levels, temperature and other conditions.

“I took those early tools used to figure out how biology works and applied those techniques for making biology work when, where and how we want,” said Lopez.

The researchers cautioned that there is no one-size-fits-all solution to biocontainment. “We have to look at what it is that we’re worried about with which application in determining which biocontainment approach is relevant,” said Anderson.

The lock-and-key approach, for instance, is not a practical answer for containing engineered DNA sequences from horizontal gene transfer, a situation in which genetic material could accidentally move from one organism to another, Anderson said.

In addition, this technique is meant to prevent the accidental spread of an engineered organism, but it is not foolproof against intentional attempts to thwart the biosafety net.

“We’re never going to be able to solve the problem of a human actively hacking away at our safety systems,” said Lopez. “Even if we could beat a human today, there will be better equipment and more knowledge 10 years from now, and that will be very hard to secure against.”