Complete the form below and we will email you a PDF version of "Access Denied: Leukemia Thwarted by Cutting Off Link to Environmental Support"

The finding offers a novel target for better treating AML, and possibly other cancers, by cutting off the ability of tumors to access nearby cellular players that feed its growth.

“The work really focuses on trying to understand the dependence of cancer cells on the microenvironment that surrounds them,” said senior author Tannishtha Reya, PhD, a professor in the Department of Pharmacology. The microenvironment refers to the normal cells, molecules and blood vessels around the cancer that may support and fuel its expansion.

In the study, the researchers showed that tetraspanin3 (Tspan3), a cell surface molecule, serves as a key link for cancer cells to interact with supportive parts of the microenvironment that help them replicate and flourish. “We found that blocking this molecule leads to a very profound inhibition of leukemia growth,” said Reya. 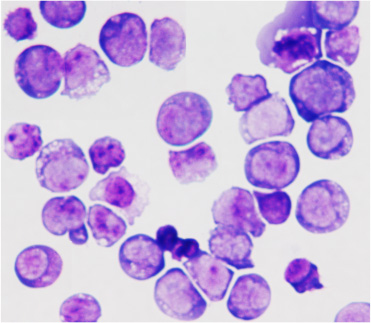 The researchers demonstrated their results in both AML mouse models and patient cancer samples.

Reya said these findings are particularly important because AML is a cancer that often doesn’t respond to current therapies. In addition, Tspan3 is a surface molecule, making it of greater translational interest as a target for antibody-mediated therapy. “There’s been great progress in pediatric leukemia research and treatment over the last few years,” said Reya. “But unfortunately, children with acute myeloid leukemia are often poor responders to current treatments. So identifying new approaches to target this disease remains critically important.”

The latest findings build on earlier work by Reya and colleagues, which identified Musashi (Msi) as a critical stem cell signal that is hijacked in several blood cancers. “We had this idea that analysis of the molecular programs controlled by Musashi may identify new genes important for these leukemias,” she said.

The researchers conducted a genome-wide expression analysis of Msi-deficient cancer stem cells from two kinds of aggressive leukemia, blast crisis chronic myelogenous leukemia (bcCML) and AML. “We identified genes commonly regulated by Msi in both leukemias,” said Reya, who is also a member of the Sanford Consortium for Regenerative Medicine and Moores Cancer Center at UC San Diego Health.

Unexpectedly, the analysis identified Tspan3 as one of the core genes controlled by Msi in leukemia. The protein is part of a large family of membrane proteins active in diverse cellular processes, including cell adhesion, proliferation and hematopoietic stem cell function and blood formation. “We are particularly excited about this work because, to our knowledge, this is the first demonstration of a requirement for Tspan3 in any primary cancer,” said Reya.

To explore the connection further, the researchers took a “leap of faith” and generated the scientific community’s first Tspan3 ‘knockout’ mouse, bred to be deficient in Tspan3. In testing, the researchers found that Tspan3 deletion impaired leukemia stem cell self-renewal and disease propagation and markedly improved survival in animal models of AML. In patient samples, Tspan3 inhibition blocked growth of AML, suggesting Tspan3 is also important in human disease.