Cancer Cells 'Talk' to their Environment, and it Talks Back

Complete the form below and we will email you a PDF version of "Cancer Cells 'Talk' to their Environment, and it Talks Back" 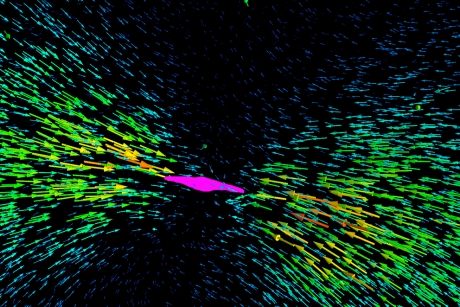 Interactions between an animal cell and its environment, a fibrous network called the extracellular matrix, play a critical role in cell function, including growth and migration. But less understood is the mechanical force that governs those interactions.

A multidisciplinary team of Cornell engineers and colleagues from the University of Pennsylvania have devised a method for measuring the force a cell – in this case, a breast cancer cell – exerts on its fibrous surroundings. Understanding those forces has implications in many disciplines, including immunology and cancer biology, and could help scientists better design biomaterial scaffolds for tissue engineering.

The group, led by Mingming Wu, associate professor in the Department of Biological and Environmental Engineering, developed 3-D traction-force microscopy to measure the displacement of fluorescent marker beads distributed in a collagen matrix. The beads are displaced by the pulling of migrating breast cancer cells embedded in the matrix. An important part of the puzzle was to calculate the force exerted by the cells using the displacement of the beads. That calculation was carried out by the team led by Vivek Shenoy, professor of materials science and engineering at the University of Pennsylvania.

Wu – who also was affiliated with the Cornell Center on the Microenvironment and Metastasis at Weill Cornell Medicine, which existed from 2009 through 2015 – said the group’s work centered on a basic question: How much force do cells exert on their extracellular matrix when they migrate?

“The matrix is like a rope, and in order for the cell to move, they have to exert force on this rope,” she said. “The question arose from cancer metastasis, because if the cells don’t move around, it’s a benign tumor and generally not life-threatening.”

It’s when the cancerous cell migrates that serious problems can arise. That migration occurs through “cross-talk” between the cell and the matrix, the group found. As the cell pulls on the matrix, the fibrous matrix stiffens; in turn, the stiffening of the matrix causes the cell to pull harder, which stiffens the matrix even more.

“We’ve shown that the cells are able to align the fibers in their vicinity by exerting force,” Hall said. “We’ve also shown that when the matrix is more fibrous – less like a continuous material and more like a mesh of fibers – they’re able to align the fibers through the production of force. And once the fiber is aligned and taut, it’s easier for cells to pull on them and migrate.”

“I’m a strong believer that every new science discovery goes hand-in-hand with new technology development,” she said. “And with every new tool, you discover something new.”

Story from Cornell University. Original piece written by Tom Fleischman. Please note: The content above may have been edited to ensure it is in keeping with Technology Networks’ style and length guidelines.