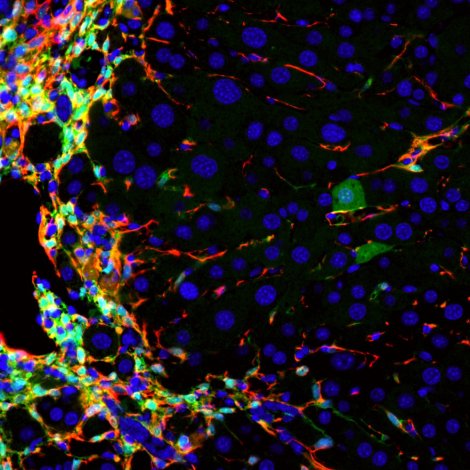 Advances in stem cell research have made it possible to convert patients’ skin cells into heart cells, kidney cells, liver cells and more in the lab dish, giving researchers hope that one day such cells could replace organ transplantation for patients with organ failure. But successfully grafting these cells into patients’ failing organs remains a major clinical challenge.

Now a team of researchers led by UC San Francisco scientists has demonstrated in mice that it is possible to generate healthy new liver cells within the organ itself, making engraftment unnecessary. What’s more, they did it by converting the very cells that drive liver disease, thereby reducing liver damage and improving liver function at the same time. The technique takes advantage of a viral gene delivery technology that has gone through early validation in patients for liver-directed gene therapies, suggesting it could be readily translated into a therapy for patients with liver disease, said Holger Willenbring, MD, PhD, a professor of surgery at UCSF and senior author of the new study, published June 2, 2016, in the journal Cell Stem Cell.

“Part of why this works is that the liver is a naturally regenerative organ, so it can deal with new cells very well. What we see is that the converted cells are not only functionally integrated in the liver tissue, but also divide and expand, leading to patches of new liver tissue,” said Willenbring, who is also associate director of the Liver Center at UCSF and a member of the Eli and Edythe Broad Center of Regeneration Medicine and Stem Cell Research.

More than 600,000 patients in the United States alone suffer from end-stage liver disease, or cirrhosis. The only available cure is liver transplantation, but the shortage of donor livers means only 6,000 patients benefit from this therapy each year in the U.S., and more than 35,000 patients die.

The new approach specifically targets liver fibrosis, the progressive scarring of the liver that is a primary driver of liver disease. Fibrosis develops when liver cells called hepatocytes can’t regenerate fast enough to keep up with damage caused by toxins such as alcohol or diseases such as hepatitis C or fatty liver disease. Cells called myofibroblasts fill in gaps left by dying hepatocytes with scar-like fibrotic tissue. It’s a bit like patching a flat tire: at first the patches help maintain the liver’s structural integrity, but eventually a liver that is more patches than functional tissue starts to fail.

Fibrotic liver disease has a slow fuse, but leads to catastrophic failure: someone who contracts hepatitis C at age 25 may feel just fine for decades, then suddenly at age 50 start experiencing the fatigue, faintness, nausea, bruising, diarrhea and jaundice that indicate the onset of end-stage liver disease. The reason is that the liver can adapt as long as at least 20 percent of it is functional, Willenbring says, but once it dips below that critical threshold, patients are often dead within two years.

“Liver fibrosis is not rare,” Willenbring said. “It’s actually the end stage of many chronic liver diseases. Obesity, for instance, can lead to fatty liver disease, which is predicted to become the number one cause of liver fibrosis in the next 10 years.”

Willenbring has dedicated his career to using stem cell biology to generate new hepatocytes (originally using human embryonic stem cells and later using induced pluripotent stem cells that could be generated from a patient’s own skin cells) that could be used in place of transplants to treat liver failure.

Ironically, however, just as he and his lab have come closer to achieving this dream, Willenbring has had to grapple with the realization that this cell therapy approach may fail to reach the majority of patients with liver failure because the tangle of fibrosis itself impairs the successful engraftment of transplanted cells.

So over the past five years, Willenbring and his team — in close collaboration with the laboratory of Dirk Grimm, PhD at Heidelberg University Hospital in Germany — have embarked on a different approach: converting fibrosis-causing myofibroblasts into healthy new hepatocytes within the liver itself.

Previous research had identified a cocktail of gene-regulating proteins that can convert other cell types into hepatocytes, but the team needed a way to deliver these instructions to myofibroblasts. After several years of work, the team identified a subtype of adeno-associated virus (AAV) that could specifically infect myofibroblasts. The researchers focused on AAV because it has been shown to be safe and effective in early human gene therapy trials, e.g., for therapy of the bleeding disorder hemophilia B.

The team showed in mice with liver disease that viruses packed with the cell fate-changing cocktail indeed infected myofibroblasts and converted them into functional hepatocytes. The number of new cells was relatively small – less than one percent of all hepatocytes in the treated mice – but this was sufficient to reduce fibrosis and improve liver function.

The viral approach was also effective in converting human myofibroblasts in a dish into working hepatocytes, but more work is certainly needed to prepare this approach for use in human patients, the researchers say. In particular, the lab is working to package the treatment into a single virus, reducing potential side effects and streamlining clinical development. The team is also working to make the viruses more specific to myofibroblasts – in the current paper muscle cells and some cells of the immune system were also infected, though without converting them into liver cells or obviously impacting their function.

The new results suggest that in the fibrotic liver this approach could produce a more efficient and stable improvement of liver function than cell transplant approaches, Willenbring said, adding that once the viral packaging is optimized, such a treatment could be done cheaply at a broad range of medical facilities, not just in the specialized research hospitals where stem-cell transplants could be conducted.

Willenbring is the first to acknowledge that the new technique is not a replacement for the current standard of care in liver disease: “A liver transplant is still the best cure,” Willenbring said. “This is more of a patch. But if it can boost liver function by just a couple percent, that can hopefully keep patients’ liver function over that critical threshold, and that could translate to decades more of life.”

In a new study, scientists at Okayama University isolated cardiac stem cells and assessed their potential use as regenerative therapy in young patients with cardiac defects. The team not only showed the effectiveness of the cells in replenishing damaged tissues, but also revealed how this happens.

END_OF_DOCUMENT_TOKEN_TO_BE_REPLACED

Scientists have used gene-editing advances to achieve a tenfold increase in the production of super-bug targeting formicamycin antibiotics.

END_OF_DOCUMENT_TOKEN_TO_BE_REPLACED

Researchers have discovered the surprising propulsion system that enables these regenerative cells to migrate through surrounding tissue to repair damage.

END_OF_DOCUMENT_TOKEN_TO_BE_REPLACED

Biomarkers Discovered That Can Help To Predict Cell Fate