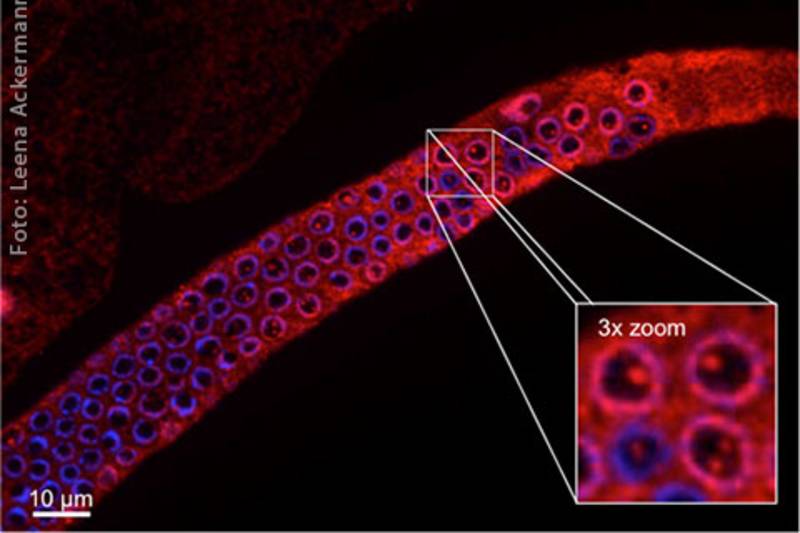 One of the most important decisions a cell has to make is a matter of life and death: can damage be repaired or is it better to undergo cellular suicide to prevent further harm? In a cascade of a so far poorly understood signaling pathway, researchers from the Cluster of Excellence on Aging Research CECAD at the University of Cologne identified a protein called UFD-2, which plays a key role in this well-balanced process. The results have been published in the journal Nature Structural & Molecular Biology.

The genetic information of every cell is encoded in the sequence of the DNA double helix. Double strand breaks in the DNA, which can be induced by radiation, are a dangerous threat to the cells, and if not properly repaired can lead to cancer. Damaged cells need to decide whether the breaks can be fixed or whether they should be removed by a cellular suicide program called “apoptosis” before initiating cancer.

Björn Schumacher, one of the senior authors, explains: “Within seconds after an harmful incident, different mechanisms start. In a schizophrenic way, the cell starts repairing as well as preparing for apoptosis. We identified an uncharacterized mechanism that integrates signals from the ongoing repair process and the cell death machinery. A protein called UFD-2 forms large complexes at the breaks and verifies whether to proceed with the repair or whether it’s time to die.” In the process, UFD-2 is a point of intersection that both receives and gives signals.

The experiments were performed with the nematode Caenorhabditis elegans. “For our research we used different strains of C. elegans, including wild type and genetically modified ones. They were exposed to ionizing radiation to induce double strand breaks and then examined,” says Leena Ackermann, lead author of the study. Schumacher adds: “The results are important to further understand how and why a cell decides to repair or to die. Is the repair still ongoing and successful or is apoptosis necessary? Cells lacking UFD-2 fail to undergo apoptosis. In humans such a situation could lead to a higher risk of a damaged cell becoming a cancer cell.”

All the proteins that play a part in this mechanism can be found in humans as well, and the findings could be highly relevant to better understanding how DNA damage leads to cancer. DNA damage is also an important driver of the aging process. Although apoptosis protects from cancer, excessive cell death can lead to tissue degeneration and aging. The senior author Thorsten Hoppe originally identified UFD-2 as a key regulator of protein degradation. Here, UFD-2 forms regulatory centers that coordinate DNA repair and cell death.  Hoppe hopes for resulting advances in tumor therapy: “The knowledge we gained from this study provides new perspectives for fighting cancer pharmaceutically. It might be possible to manipulate the well-balanced process of apoptosis and protein degradation to make clearance of tumor cells more efficient.”