Along with the burgeoning use of advanced medical imaging tests over the past decade have come rising public health concerns about possible links between low-dose radiation and cancer.

Using new laboratory technology, scientists have shown that cellular damage is detectable in patients after CT scanning, according to a new study led by researchers at the Stanford University School of Medicine.

“We now know that even exposure to small amounts of radiation from computed tomagraphy scanning is associated with cellular damage,” said Patricia Nguyen, MD, one of the lead authors of the study and an assistant professor of cardiovascular medicine at Stanford. “Whether or not this causes cancer or any negative effect to the patient is still not clear, but these results should encourage physicians toward adhering to dose reduction strategies.”

“The use of medical imaging for heart disease has exploded in the past decade,” said Joseph Wu, MD, senior author of the study. Wu is a professor of medicine and of radiology and the director of the Stanford Cardiovascular Institute. “These tests expose patients to a nontrivial amount of low-dose radiation. But nobody really knows exactly what this low-dose radiation does to the patient. We now have the technology that allows us to look at very subtle, cell-level changes.” 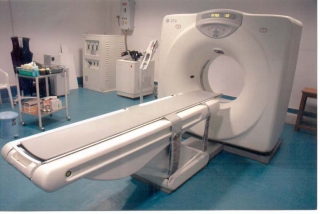 Along with the burgeoning use of advanced medical imaging tests over the past decade have come rising public health concerns about possible links between low-dose radiation and cancer. The worry is that increased radiation exposure from such diagnostic procedures as CT scans, which expose the body to low-dose X-ray beams, can damage DNA and create mutations that spur cells to grow into tumors.

But there has been limited scientific evidence to date that shows the effects of this low-dose radiation on the body, according to the study. Currently, there is a bill winding its way through Congress to fund more research on the health effects of low doses of radiation, Wu said. This study’s findings point to the need for more research, he said.

“I think there are legitimate concerns about the exposure to low-dose radiation, but the problem is that it is difficult to prove a causal relationship with cancer,” Nguyen said. “Even though we show some damage is occurring at a cellular level, this damage is being repaired. It is the damage that escapes repair, or the cells that are not eliminated and are mutated, that go on and produce cancer. We can’t track those cells with current technology.”

In this study, researchers examined the effects on human cells of low-dose radiation from a wide range of cardiac and vascular CT scans. These imaging procedures are commonly used for a number of reasons, including management of patients suspected of having obstructive coronary artery disease, and for those with aortic stenosis, in preparation of transcatheter aortic valve replacement.

A CT scan, which is used for imaging and diagnostic procedures throughout the body, exposes patients to at least 150 times the amount of radiation from a single chest X-ray, the study said.

In 2007, the National Cancer Institute estimated that 29,000 future cancer cases could be attributed to the 72 million CT scans performed in the country that year.

But the reliability of such predictions depends on how scientists measure the underlying link between radiation and cancer in the first place, Nguyen said.

“Because we don’t know much about the effects of low-dose radiation — all we know is about high doses from atomic bomb blast survivors — we just assume it’s directly proportional to the dose,” said Nguyen. “We wanted to see what really happens at the cellular level.”

Results showed an increase in DNA damage and cell death, as well as increased expression of genes involved in cell repair and death, the study said. Although most cells damaged by the scan were repaired, a small percentage of the cells died, the study said.

“These findings raise the possibility that radiation exposure from cardiac CT angiography may cause DNA damage that can lead to mutations if damaged cells are not repaired or eliminated properly,” the study said. “Cumulative cell death after repeated exposures may also be problematic.”

“We need to learn more because it’s not a benign effect, even at these low dosages,” Nguyen said. “Our research supports the idea that maybe physicians shouldn’t just use the best image quality in all cases. We shouldn’t eliminate CT scans because they’re obviously important, but you can make it safer by reducing the doses, by getting better machines and technology, and by giving patients something to protect them.”

Nguyen added: “It is important to note that we did not detect any DNA damage in patients receiving the lowest doses of radiation and who were of average weight and had regular heart rates.”