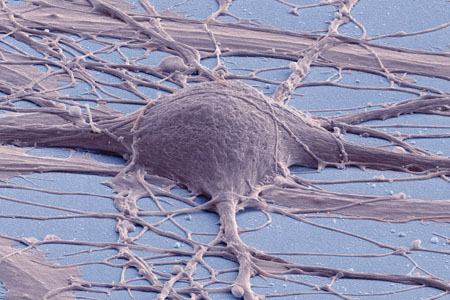 Researchers at University of California San Diego School of Medicine have confirmed that mutation-caused dysfunction in a process cells use to transport molecules within the cell plays a previously suspected but underappreciated role in promoting the heritable form of Alzheimer’s disease (AD), but also one that might be remedied with existing therapeutic enzyme inhibitors.

“Our results further illuminate the complex processes involved in the degradation and decline of neurons, which is, of course, the essential characteristic and cause of AD,” said the study’s senior author Larry Goldstein, PhD, Distinguished Professor in the Departments of Neuroscience and Cellular and Molecular Medicine at UC San Diego School of Medicine and director of both the UC San Diego Stem Cell Program and Sanford Stem Cell Clinical Center at UC San Diego Health. “But beyond that, they point to a new target and therapy for a condition that currently has no proven treatment or cure.”

Alzheimer’s disease is a neurodegenerative disorder characterized by progressive memory loss and cognitive dysfunction. It affects more than 30 million people worldwide, including an estimated 5.4 million Americans. One in 10 persons over the age of 65 has AD; one in three over the age of 85. There are currently no treatments proven to cure or reduce the progression of AD.

Genetically, AD is divided into two groups: the much more common sporadic (sAD) form of the disease in which the underlying primary cause is not known and the rarer familial (fAD) form, produced by inherited genetic mutations. In both forms, the brains of AD patients feature accumulations of protein plaques and neurofibrillary tangles that lead to neuronal impairment and eventual cell death.

The prevailing “amyloid cascade hypothesis” posits that these plaques and tangles are comprised, respectively, of amyloid precursor protein (APP) fragments and tau proteins that fuel cellular stress, neurotoxicity, loss of function and cell death. There has been some evidence, however, of another disease-driver: defects in endocytic trafficking — the process by which cells package large, external molecules into vesicles or membrane-bound sacs for transport into the cell for a variety of reasons or uses.

But previous research focused on non-neuronal cells and did not examine the effects of normal expression levels of AD-related proteins, leaving it unclear to what degree decreased endocytosis and other molecular movement within cells played a causative role.

Goldstein and colleagues analyzed neurons created from induced pluripotent stem cells in which they generated PS1 and APP mutations characteristic of fAD using the emerging genome editing technologies CRISPR and TALEN. In this “disease-in-a-dish” approach, they found that the mutated neurons displayed altered distribution and trafficking of APP and internalized lipoproteins (proteins that combine with or transport fat and other lipids in blood plasma). Specifically, there were elevated levels of APP in the soma or cell body while levels were reduced in the neuronal axons.

In previous work, Goldstein’s team had demonstrated that PS1 and APP mutations impaired the activity of specific cellular enzymes. In the latest work, they found that treating mutated fAD neurons with a beta-secretase inhibitor rescued both endocytosis and transcytosis (molecule movement within a cell) functions.