The discovery suggests the basis for a potential new therapeutic approach to eradicate blood cancers, which affect more than 1.1 million Americans. In fact, researchers found that in cell and mouse models, a treatment that employed a targeted monoclonal antibody effectively impaired the ability of CSCs to regenerate and made them easier to eradicate with existing enzyme-targeted (tyrosine kinase inhibitor) therapies.

“This is the first description of cancer stem cell generation through decreased expression of a transcriptional repressor of an embryonic pattern of alternative splicing that enhances stem cell self-renewal and survival,” said senior author Catriona Jamieson, MD, PhD, associate professor of medicine, chief of the Division of Regenerative Medicine and director of Stem Cell Research at Moores Cancer Center. 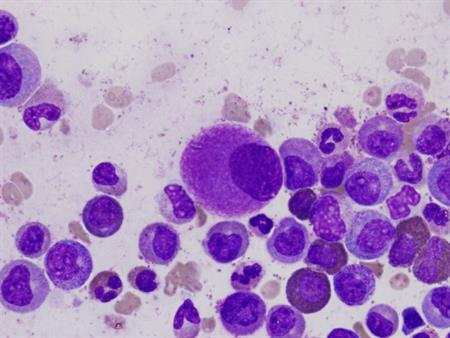 “Rather than acquiring multiple DNA mutations, as was previously thought, cancer stem cells in chronic myeloid leukemia (CML) switch to embryonic RNA splicing, which enhances their capacity to self-renew or clone themselves,” said Jamieson.  “If we can detect and turn off embryonic splicing, we may be able to prevent cancer stem cells from propagating themselves.  Also, if we target embryonic versions of proteins that are re-expressed by cancer, like CD44 variant 3, with specific antibodies together with tyrosine kinase inhibitors, we may be able to circumvent cancer relapse – a leading cause of cancer-related mortality.”

Jamieson and colleagues showed that downregulation of Muscleblind-like 3 (MBNL3) RNA binding proteins resulted in re-expression of a human embryonic stem cell-specific alternative splicing gene regulatory network – a mechanism that controls embryonic stem cell pluripotency and fate. One effect was reprogramming of progenitor cells into CSCs in blast crisis CML. Blast crisis occurs when there is 20 percent or more leukemia stem cells in the blood or bone marrow. It is the most advanced stage of leukemia.

The researchers found, however, that treatment with a humanized pan-CD44 monoclonal antibody and a targeted tyrosine kinase antagonist disrupted development of CSCs in their protected microenvironment, forcing them to enter the blood stream where dasatinib – a tyrosine kinase inhibitor – could effectively target them.

A Roadmap to Antibody Drug Discovery