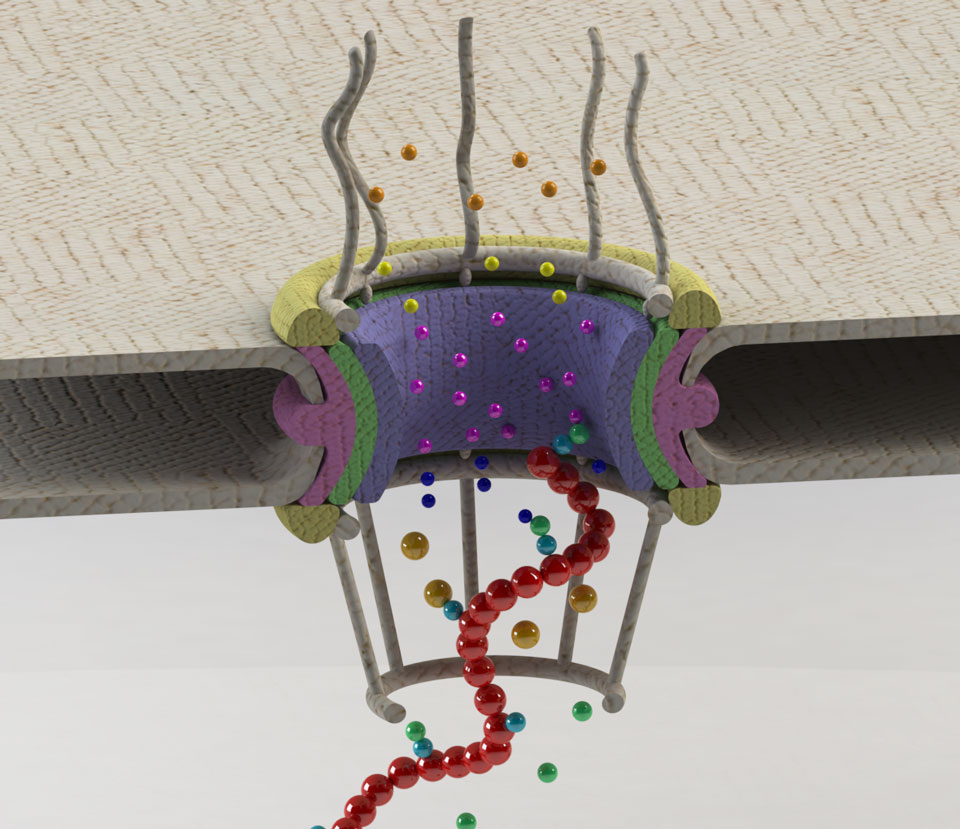 Mistakes happen. This is the case in the process of transporting genetic information in cells. How our cells keep errors in this process in check is the subject of a new paper by researchers at the Department of Energy’s Lawrence Berkeley National Laboratory (Berkeley Lab).

They found that RNA-binding proteins are regulated such that gateway proteins can recognize and block aberrant strands of genetic code from exiting the nucleus. Unused messenger RNA (mRNA) strands that cannot exit the nucleus would eventually disintegrate.

Their findings, published in the journal Scientific Reports, shed light on a complex system of cell regulation that acts as a form of quality control for the transport of genetic information out of the nucleus.

Getting a more complete picture of how genetic information gets expressed in cells is important in disease research, the researchers said.

“Some components of this machinery are dysregulated in various types of cancers,” said study principal investigator Mohammad Mofrad, faculty scientist at Berkeley Lab’s Molecular Biophysics and Integrated Bioimaging Division. “Understanding the molecular mechanism of genetic information transport and quality control would substantially improve the current knowledge about various types of cancers and other human diseases.”

Biology textbooks already describe how strands of mRNA copy sections of DNA inside a cell’s nucleus and then exit to the cell’s cytoplasm. It is in the cytoplasm where the genetic code is used to synthesize proteins, so ensuring that only the correct mRNA strands get used is critical to the formation of properly functioning proteins.

Previous studies have looked at specific steps in this process, but the complex system of sorting out RNA that is ready to leave the nucleus has not been well understood.

Mofrad, who is also a professor of bioengineering and of mechanical engineering at UC Berkeley, and his Ph.D. student, Mohammad Soheilypour, turned to a computer model to shed light on this process of mRNA export.

“With experiments, we can study parts of a system, but there are limitations to their ability to provide the level of spatial and temporal resolution we need to really understand the behavior of a whole system,” said Soheilypour.

After validating the computer model with known data from previous studies, the researchers ran simulations to test the factors that influence the transport of mRNA out of the nucleus.

They found that a combination of a multitude of protein-protein interactions enables the cell to verify the readiness of mRNA for transport out of the nucleus. RNA-binding proteins are attached to each strand of mRNA, helping to recruit export receptors. Researchers found that regulation of the interaction between RNA-binding proteins and export receptors is the key for nuclear basket proteins to distinguish aberrant mRNAs and retain them inside the nucleus.

“Imagine that in order to exit the gate, you need a certain number of validated tickets,” said Soheilypour. “The RNA-binding proteins are like the tickets the mRNA needs to get out, but those tickets need to be validated by the export factors. Without enough validated tickets, the guard proteins do not recognize the mRNA strand as something to let pass through the membrane’s gate.”

The study also found that longer strands of mRNA have more trouble passing through the nuclear membrane. They theorize that because longer mRNA needs extra time to compact itself while trying to get through the gate, guard proteins have more chances to check for “validated tickets.”

Story from Berkeley Lab. Original piece written by Sarah Yang. Please note: The content above may have been edited to ensure it is in keeping with Technology Networks’ style and length guidelines.