History of Cells Told Through MEMOIR 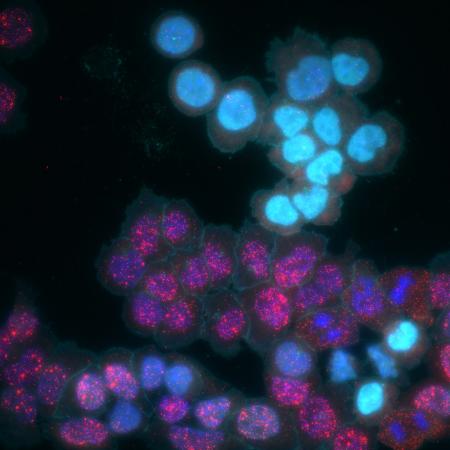 Researchers have developed a new method for reading the history and "family trees" of cells. Called MEMOIR, or Memory by Engineered Mutagenesis with Optical In situ Readout, the technique can record the life history of animal cells—their relationships with other cells, communication patterns, and the influential events that have shaped them.

"MEMOIR allows cells to record their histories in their genomes and allows us to read out that information using advanced microscopy methods," says Long Cai, assistant professor of chemistry at Caltech and a principal investigator of the new research. Colead authors of the paper are postdoctoral scholars Kirsten Frieda and Sahand Hormoz, and research scientist James Linton.

"Normally, we can only see the state of a cell at the moment we look at it," says co-principal investigator Michael Elowitz, professor of biology and bioengineering at Caltech and an investigator with the Howard Hughes Medical Institute. "But what we really want to know is, what is the history of that cell? Who are its sisters and cousins? Who did it talk to and when?"

The new study serves as a proof of principle, demonstrating that MEMOIR can read the histories of cells from mice. Ultimately, the researchers say the method will aid in the understanding of tissue and animal development, as well as in studies of the abnormal development of diseased tissues like tumors.

Two new powerful tools have helped in this goal. In one, genome editing, a developing organism's genetic code can be changed at any designated target site with the help of a DNA-slicing system called CRISPR. Any change written in one cell's genome is passed on to subsequent generations. A change occurring earlier in an animal's development will appear in many of its cells, while more recent changes will appear in fewer cells. By analyzing the patterns of DNA edits, researchers can identify the cells' common ancestors and figure out how they are related; for example, they can determine which cells are sisters or cousins. Similar approaches are used in diverse areas of science—including medieval history.

"Historians can identify the lineage and origins of medieval manuscripts because of errors propagated by medieval copyists in abbeys," says Cai. "Thus, propagated errors are quite informative about the history of texts and, in our case, cells."

The other tool, called sequential single molecule Fluorescence In Situ Hybridization—seqFISH—was developed by Cai to learn which genes are active in an individual cell. In a recent Neuron paper, Cai's team demonstrated how the technique could be used to determine the expression levels of more than 200 genes in a single cell. The method also lets researchers analyze the gene activity of a cell in its place of origin in the body. Previous techniques required the cells to be dissociated from their natural setting.

In the new study, the scientists combined the two tools: the seqFISH method was used to track changes introduced into the genome via CRISPR editing.

"The key insight was to develop a special kind of genomic memory storage element, analogous to a computer bit, that could be flipped by CRISPR between two different states," says Elowitz. "This can be distinguished just by looking at the cells with seqFISH and determining whether they share the same CRISPR edits."

This system can be used to learn about not only cell-lineage information but also about events that happened to the cells in the past—when they received messages from one another or when they changed from one cell type into another. For example, as a tumor develops, some cells may receive different molecular signals than other cells, triggering distinct fates. One cell might become metastatic and migrate, while another cell remains stationary. The ability to track how signals in the past affected the fate of a cell in the present could provide a new view of tumor development across time and space.

"The technology promises us access to information within the cell that we have not been privy to before," says Linton. "Potentially, MEMOIR can record the activity of multiple signaling pathways within single cells, providing information on how the pathways work together to influence a cell to make decisions, such as when a neural stem cell differentiates to become a neuron."

In the current study, the researchers traced the history of mouse embryonic stem cells over three generations. In the future, they hope to follow even more generations—and ultimately learn the life stories of animal development, as told through their cellular memoirs.

Story from CalTech. Original piece written by Whitney Clavin. Please note: The content above may have been edited to ensure it is in keeping with Technology Networks’ style and length guidelines.