How a 'Jellyfish'-shaped Structure Relieves Pressure in Your Cells

How a 'Jellyfish'-shaped Structure Relieves Pressure in Your Cells

LA JOLLA, CA - August 16, 2018 - Scientists at Scripps Research have solved the structure of a key protein that senses when our cells swell. This protein, called SWELL1 (or LRRC8A), works as an “ion channel” on the cell membrane to relieve pressure inside cells.

The new study, published recently in the journal eLIFE, shows that SWELL1 is made of six subunits that meet on top, bundling together to form a jellyfish-like mantle with six tendrils hanging down.

“This structure provides a first glimpse into how this ion channel senses changes in volume in a cell,” says Jennifer Kefauver, graduate student at Scripps Research, the Howard Hughes Medical Institute, and first author of the new study.

SWELL1 was discovered in 2014 in the lab of Ardem Patapoutian, PhD, professor at Scripps Research and investigator with the Howard Hughes Medical Institute. The discovery opened the door to crucial studies into how the protein functions.

The next important step was to shed light on SWELL1’s molecular structure. The scientists aimed to understand the basics of how this ion channel senses changes in volume. To do this, they needed to take a look at the channel’s molecular machinery.

Kefauver spearheaded studies as a joint student between the labs of Patapoutian and Andrew Ward, PhD, professor at Scripps Research and leader in a high-resolution imaging technique called cryo-electron microscopy (cryo-EM). Kefauver used cryo-EM techniques to solve SWELL1’s jellyfish-like structure and get a first look at how ions can travel through the channel’s central pore.  “Jennifer pursued the structure of SWELL1 with great tenacity, leaving no stone unturned and overcoming enumerable hurdles. It was wonderful to see the fruits of her labor result in such a beautiful structure,” said Ward.

This new look at the ion channel suggests that interacting parts of the tendrils—sites that have a positive or a negative charge—sense a change in ionic strength in the cell (a dilution of the cell’s salt contents as it absorbs water). The charged residues could send a signal up to the pore of the channel, telling the channel to release chloride ions from the cell and relieve the pressure. 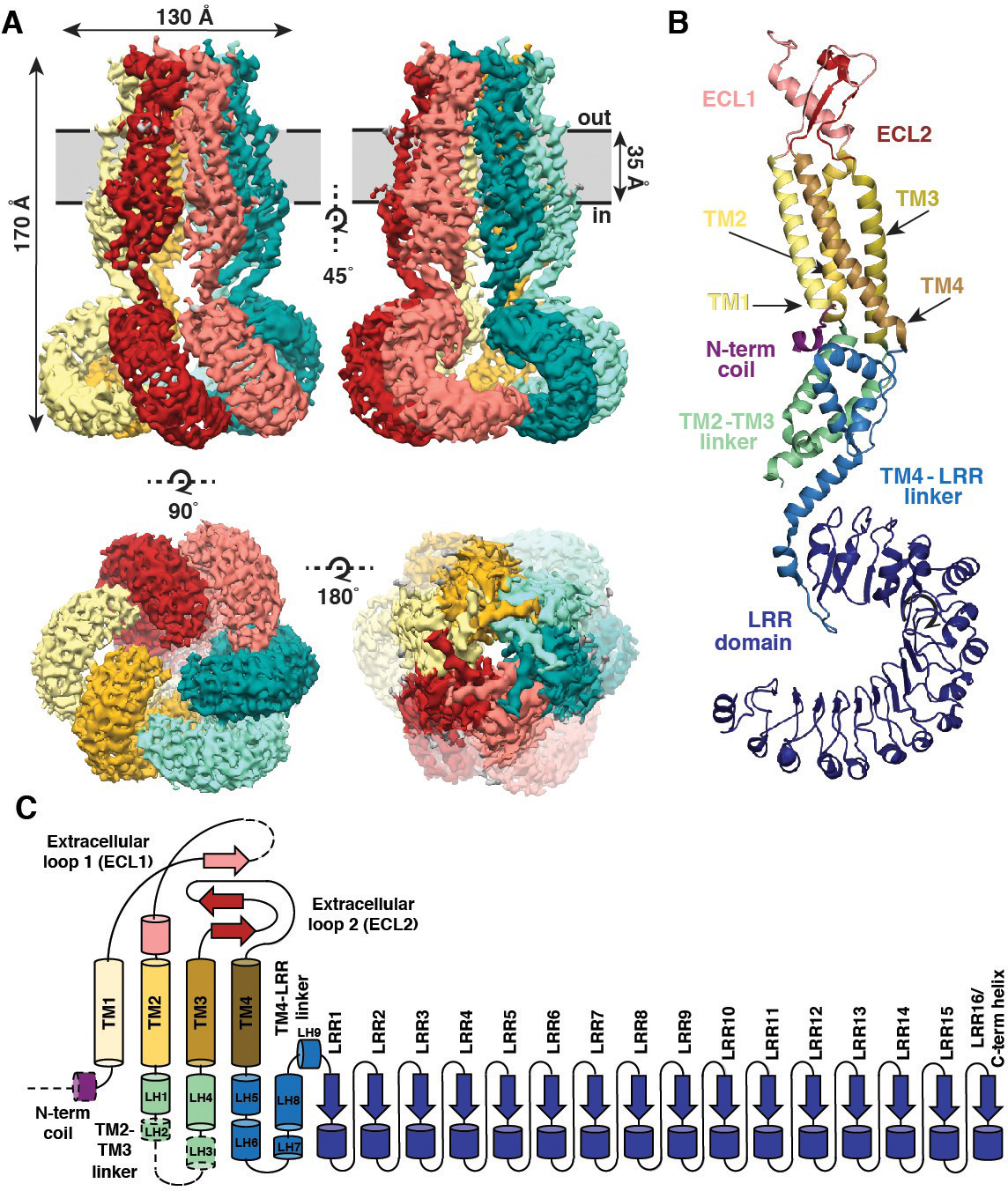 Overall architecture of homomeric SWELL1. (A) Cryo-EM reconstruction of SWELL1 homohexamer viewed from the membrane plane highlighting a dimer pair (top left, red and pink subunits) and an interface between dimers (top right, pink and green subunits), from the extracellular side (bottom left), and from the cytosolic side (bottom right). (B) Detailed view of SWELL1 ‘inner’ protomer. (C) Topology diagram denoting secondary structural elements. Dashed lines indicate unresolved regions on both protomers in a dimer pair, while dashed shape borders indicate regions that are only resolved on one protomer. Credit: Kefauver et al. 2018, Scripps Research.

Kefauver is hoping this new view of the structure can fuel medical research. SWELL1 has a role in at least one disease—an immune deficiency called agammaglobulinemia. “Having the structure is really important for scientists trying to understand how this channel works and what disease-causing mutations might do.”

Next, the researchers took a closer look at how the different parts of the SWELL1 structure affect channel function. They found that mutating the protein at either of two sites keeps the structure from properly controlling traffic through the ion channel.

The new study shows bundles of the SWELL1 subunit alone—and scientists know that SWELL1 has to be there for a functional channel. But up to four other subunits can swap into the structure at different sites. Kefauver says the next step is to determine how different combinations of SWELL1 subunits come together to form ion channels with different activities.

This article has been republished from materials provided by Scripps Research. Note: material may have been edited for length and content. For further information, please contact the cited source.