Complete the form below and we will email you a PDF version of "How Prions Kill Neurons: New Culture System Shows Early Toxicity to Dendritic Spines" 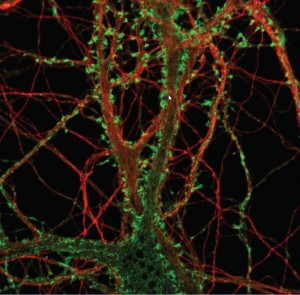 Prion diseases are fatal and incurable neurodegenerative conditions of humans and animals. Yet, how prions kill nerve cells (or neurons) remains unclear. A study by Biochemistry department Professor and Chair David Harris, MD, PhD, describes a system in which to study the early assault by prions on brain cells of the infected host.

Some of the earliest and potentially most critical changes in prion-infected brains occur at the connections (synapses) between neurons, and specifically at so-called dendritic spines. Dendritic spines are protrusions on the post-synaptic branches of a neuron that receive signals from other neurons. However, to date there has been no experimentally tractable model system in which the early degenerative changes caused by prions can be studied in cell culture.

Harris and colleagues argue that the availability of a neuronal culture system susceptible to the toxic effects of prions is crucial for understanding the underlying mechanisms and for potentially identifying drugs that block neurodegeneration. In this study, they report such a system, which reproduces acute prion neurotoxicity through degeneration of dendritic spines on cultured hippocampal neurons.

The researchers summarize their results as follows: “We describe a new system that is capable of reproducing acute prion neurotoxicity, based on PrPSc-induced degeneration of dendritic spines on cultured hippocampal neurons”. The system, they state, “provides new insights into the mechanisms responsible for prion neurotoxicity, and it provides a platform for testing potential therapeutic agents”.

Because “dendritic spine loss is a common theme in many neurodegenerative conditions, including Alzheimer’s, Huntington’s, and Parkinson’s diseases, and has been suggested to contribute to clinical symptoms in patients”, the researchers also suggest that their system allows for “direct comparisons between pathogenic mechanisms involved in prion diseases and other neurodegenerative disorders”.