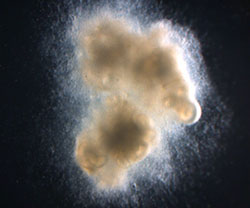 Scientists report in Nature Medicine using human pluripotent stem cells to grow human intestinal tissues that have functioning nerves in a laboratory, and then using these to recreate and study a severe intestinal nerve disorder called Hirschsprung’s disease.

The findings describe an unprecedented approach to engineer and study tissues in the intestine – the body’s largest immune organ, its food processor and main interface with the outside world. Study authors at Cincinnati Children’s Hospital Medical Center say the paper puts medical science a step closer to using human pluripotent stem cells (which can become any cell type in the body) for regenerative medicine and growing patient-specific human intestine for transplant.

“One day this technology will allow us to grow a section of healthy intestine for transplant into a patient, but the ability to use it now to test and ask countless new questions will help human health to the greatest extent,” said Michael Helmrath, MD, co-lead study investigator and surgical director of the Intestinal Rehabilitation Program at Cincinnati Children’s.

This ability starts with being able to model and study intestinal disorders in functioning, three-dimensional human organ tissue with genetically-specific patient cells. The technology will also allow researchers to test new therapeutics in functioning lab-engineered human intestine before clinical trials in patients.

"Many oral medications give you diarrhea, cramps and impair intestinal motility. A fairly immediate goal for this technology that would help the largest number of people is as a first-pass screen for new drugs to look for off-target toxicities and prevent side effects in the intestine,” explained Jim Wells, PhD, co-lead investigator and director of the Pluripotent Stem Cell Facility at Cincinnati Children’s.

As science continues to learn more about how important intestinal health is to overall health, Wells and Helmrath said using functioning lab-generated human intestine creates an array of new research opportunities. Some include the ability to conduct deeper studies into nutritional health, diabetes, severe intestinal diseases (like necrotizing enterorcolitis), and biochemical changes in the body from gastric by-pass weight-loss surgery.

Researchers started out by subjecting human pluripotent stem cells to a biochemical bath that triggers their formation into human intestinal tissue in a petri dish. The process was essentially the same as that used by the Wells’ lab in a landmark 2010 Nature study, which reported the first-ever generation of three-dimensional human intestinal organoids in a laboratory.

Intestinal tissues from the initial study lacked an enteric nervous system, which is critical to the movement of waste through the digestive tract and the absorption of nutrients. The gastrointestinal tract contains the second largest number of nerves in the human body, according to Wells. When these nerves fail to work properly it hinders the contraction of intestinal muscles. This contributes to abdominal pain, diarrhea, constipation, and in severe cases creates functional blockages that require surgery.

“We tried a few different approaches largely based on the hypothesis that, if you put the right cells together at the right time in the petri dish, they’ll know what do to. It was a longshot, but it worked,” said Wells, who credits Cincinnati Children’s developmental biologist Samantha Brugmann, PhD, (and a study co-author) with providing critical insights into embryonic nerve development.

The appropriate mix caused enteric nerve precursor cells and intestines to grow together in a manner resembling developing fetal intestine. The result was the first evidence for generating complex and functional three-dimensional intestinal organoids in a petri dish, and fully derived from human pluripotent stem cells.

A key test for the engineered intestines and nerves was transplanting them into a living organism - in this case laboratory mice with suppressed immune systems. This allowed researchers to see how well the tissues grow and function. Study data show the tissues work and are structured in a manner remarkably similar to natural human intestine. They grow robustly, process nutrients and demonstrate peristalsis – series of wave-like muscle contractions that in the body move food through the digestive tract.

Researchers then used the technology to study the molecular progression of a rare form of Hirschsprung’s disease - a condition in which the rectum and colon fail to develop a normal nervous system, causing waste to accumulate. A severe form of Hirschsprung’s is caused by a mutation in the gene PHOX2B. Tests in a petri dish and mice demonstrated that mutating PHOX2B causes profound detrimental changes to innervated intestinal tissues.

The current study blends basic research and clinical insight from the Developmental Biology and Endocrinology laboratory staff of Wells and General/Thoracic Surgery research team of Helmrath – who cares for children with a broad spectrum of digestive disorders. Co-first authors include Maxime Mahe, PhD, an instructor in the Helmrath lab, and Michael Workman, PhD, a former a member of the Wells lab.

Story from Cincinnati Children's Hospital Medical Center. Please note: The content above may have been edited to ensure it is in keeping with Technology Networks’ style and length guidelines.