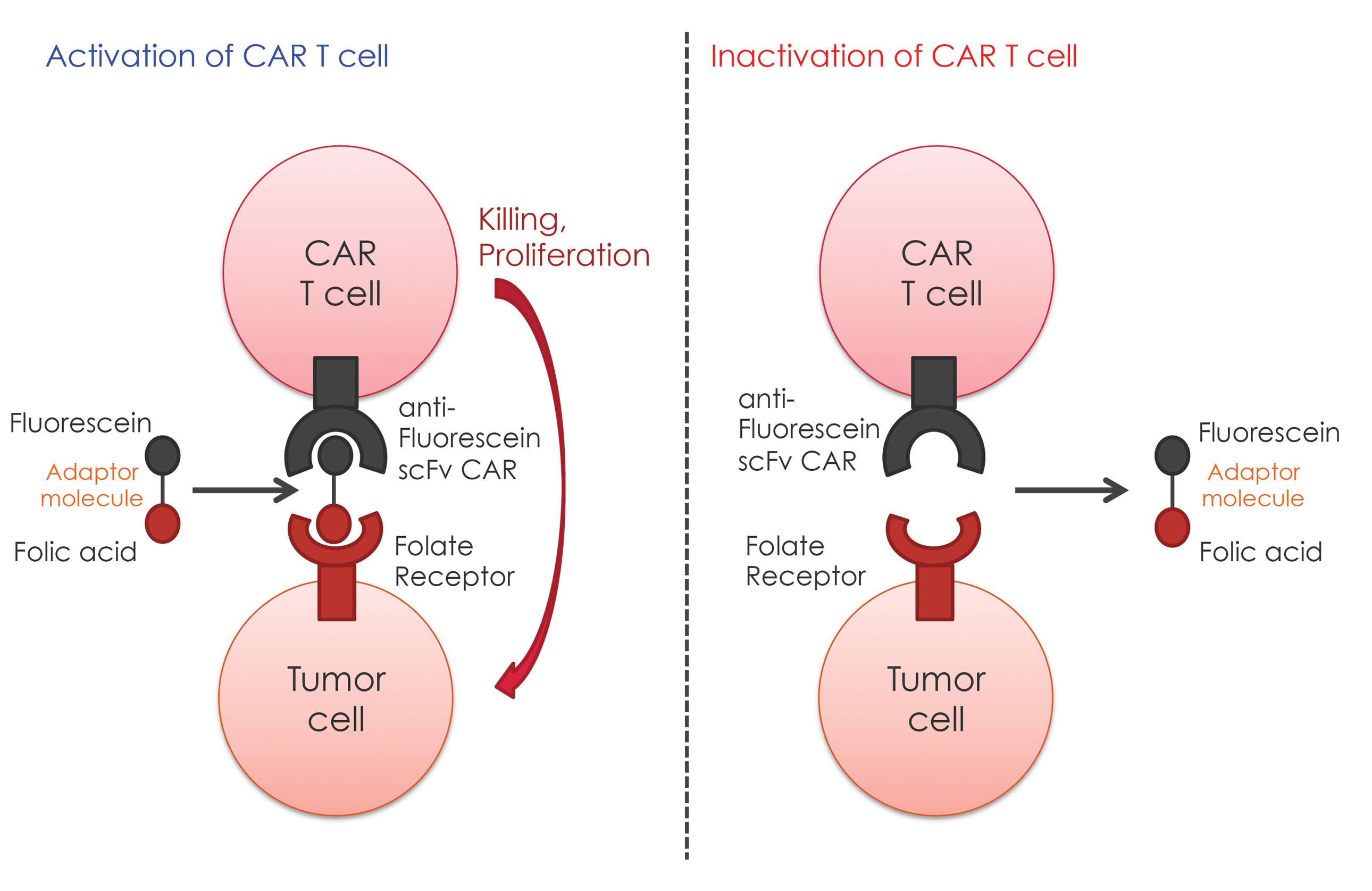 T cells are the immune system's natural defense against cancer and other harmful entities in the human body. However, the cells must be activated and taught by the immune system to recognize cancer cells in order to seek out and destroy them. Unfortunately, many types of cancer manage to thwart this process.

In the 1990s scientists found a way to genetically engineer T cells to recognize a specific cancer. These engineered T cells, called chimeric antigen receptor, or CAR, T cells, have been recently used as treatment for cancer, said Philip S. Low, Purdue's Ralph C. Corley Distinguished Professor of Chemistry and director of the Purdue Center for Drug Discovery who led the work.

"The problem is that the traditional engineered T-cell treatment can be too effective, sometimes killing tumor cells too fast and triggering a toxic reaction in a patient, and sometimes not stopping once the tumor has been destroyed and continuing to seek out and destroy healthy cells important to bodily functions," Low said. "We have found a potential way to control the engineered immune cells to overcome the limitations posed by CAR T-cell therapy."

Low and Purdue graduate student Yong Gu Lee collaborated with Endocyte Inc. scientist Haiyan Chu to design genetically engineered CAR T cells that must be activated and targeted by a small molecule adaptor before they can kill cancer cells. The technology has been tested in animal models but no human trials have been performed. A poster presentation describing the work was presented Tuesday (April 19) at the American Association for Cancer Research annual meeting in New Orleans.

"While the traditional CAR T cells could remain and replicate in the human body for many years, the adaptors we have created are expected to be excreted fairly quickly," Lee said. "By controlling the level of adaptors in the system, we can control the numbers and potencies of active CAR T cells. Those that aren't stimulated by an adaptor molecule are blind and do not recognize or target any cells. Eventually, if they remain inactive for a while, they should die and be eliminated from the body."

A study in mice showed the anti-tumor activity was induced only when both the engineered CAR T cell and the correct adaptor molecules were present.

The system also offers the potential to treat multiple cancer subtypes at once, Low said.

"Most tumors are heterogeneous and contain cancer cells that express different characteristics, including having different tumor-specific proteins on their surface," he said. "The cancer-targeting molecule on the adaptor we designed can be swapped out to target different molecules on other unrelated cancer cell surfaces. The idea is that a mixture of these adaptors can be given to a patient so that a single CAR T cell clone can be targeted to all of the relevant cancer subtypes in a patient."

The adaptor molecule serves as a bridge between the CAR T-cell and the cancer cell. It is made with a yellow dye called fluorescein isothiocyanate on one end, to which the engineered CAR T cells have been designed to bind, and a cancer-targeting molecule on the other.

Low's research has focused on the design and synthesis of technologies for targeted delivery of therapeutic and imaging agents to treat cancer, inflammatory and autoimmune diseases, and infectious diseases.

He has developed molecules that target folate-receptors and prostate-specific membrane antigen on the surfaces of cancer cells. Approximately 85 percent of ovarian cancers; 80 percent of endometrial and lung cancers; and 50 percent of breast, kidney and colon cancers express folate receptors on their cellular surfaces. Prostate-specific membrane antigen receptors are found on nearly 90 percent of all prostate cancers. Other tumor-specific ligands developed by Low's lab can target each of the other major human cancers, he said.

"In the past a new CAR T cell had to be designed for each desired cancer target," Low said. "This system uses the same blind CAR T cell for all treatments. The adaptor molecule is what needs to be changed, and it is far easier to manipulate and swap pieces in and out of it than the T cells."

In addition to Low, Chu and Lee, members of the research group include Purdue postdoctoral research associates at the time of the study Srinivasarao Tenneti and Ananda Kumar Kanduluru.

Drug discovery is one of the priorities within Purdue Moves, an initiative designed to broaden the university's global impact and enhance educational opportunities for its students. All of the moves fall into four broad categories: science, technology, engineering and math (STEM) leadership; world-changing research; transformative education; and affordability and accessibility.

The center and drug discovery initiative builds upon Purdue's strengths along all points of the drug discovery pipeline, including 14 core units to provide shared resources for analysis, screening, synthesis and testing of potential therapeutic compounds.

With more than 44 Purdue-developed compounds at various stages of preclinical development, and 16 in human clinical trials, Purdue is among the most productive universities in the world of drug discovery.