Skeletal muscles are made of long, thin cells that are packed with highly organized proteins and organelles. During strenuous exercise, the rate of energy use in skeletal muscles can increase by more than 100-fold almost instantly. To meet this energy demand, muscle cells contain mitochondria. These organelles, commonly referred to as the cell’s “power plants,” convert nutrients into the molecule ATP, which stores energy. In this process—known as cellular respiration or oxidative phosphorylation—the mitochondria act like small cellular batteries, using an electrical voltage across their membranes as an intermediate energy source to produce ATP.

Scientists have long believed that the energy produced by mitochondria is distributed through muscle cells by some type of diffusion mechanism. However, studies have shown that these diffusion pathways alone are not sufficient to support normal muscle contraction. 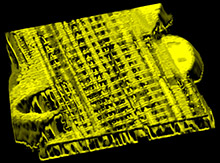 A team led by Drs. Robert S. Balaban and Sriram Subramaniam from NIH’s National Heart, Lung, and Blood Institute (NHLBI) and National Cancer Institute (NCI), respectively, hypothesized that some other faster, more efficient energy pathway must spread energy throughout muscle cells. Their research was conducted on the NIH campus in Bethesda, Maryland.

The group analyzed high-resolution 3-D images of mouse skeletal muscle. They used an imaging technique known as focused-ion beam scanning electron microscopy (FIB-SEM). Dr. Subramaniam and his team have used this approach, which they developed, to determine the structure of many key proteins, including brain receptors and the virus that causes AIDS.

The researchers traced the paths of mitochondria and found that they formed a network, or reticulum. They hypothesized that these organelles might form a vast, interconnected network in a way that resembles electrical transmission lines in a municipal power grid.

“The discovery of this mechanism for rapid distribution of energy throughout the muscle cell will change the way scientists think about muscle function and will open up a whole new area to explore in health and disease,” Balaban says.