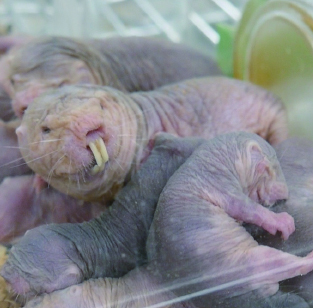 Naked mole-rats (NMR) are the longest-living rodent species and exhibit “extraordinary” resistance to cancer. Mole-rats live up to 30 years, 10 times longer than mice, and captured colonies almost never show any type of cancer. Understanding these animals’ anti-cancer mechanisms may help advance human treatment in the future, according to a collaborative research team from Hokkaido University and Keio University in Japan.

The research team took skin fibroblast tissue from adult mole-rats and reprogrammed the cells to revert to pluripotent stem cells. These are called induced pluripotent stem cells (iPSCs) and, like embryonic stem cells, are capable of becoming any type of tissue in the body. However, these stem cells can also form tumours called teratomas when transplanted back into the animals.

When the mole-rats’ iPSCs were inserted into the testes of mice with extremely weak immune systems, the team discovered that they didn’t form tumours in contrast to human iPSCs and mouse iPSCs. Upon further investigation, they found that a tumour-suppressor gene called alternative reading frame (ARF), which is normally suppressed in mouse and human iPSCs, remained active in the mole-rat iPSCs.

The team also found that ERAS, a tumorigenic gene expressed in mouse embryonic stem cells and iPSCs, was mutated and dysfunctional in the mole-rat iPSCs. When the researchers disabled the ARF gene, forced the expression of the mouse ERAS gene in the mole-rat iPSCs, and then inserted them into the mice, the mice grew large tumours.

When researchers suppressed the ARF gene in mole-rat cells during the reprogramming process to iPSCs, the cells stopped proliferation with sign of cellular senescence, while the opposite happens with mouse cells. Researchers theorize that this further helps protect the naked mole-rat by reducing the chance for tumour formation. They call this ARF suppression-induced senescence (ASIS) and it appears to be unique to the naked mole-rat.

These findings could help researchers figure out how human iPSCs can be used for treating patients without forming tumours, which is one of the major challenges associated with undifferentiated iPSCs. “Further research into the detailed mechanisms underlying ASIS in naked mole-rats may shed new light on cancer resistance in the mole-rats and contribute to the generation of non-tumorigenic human-iPSCs, enabling safer cell-based therapeutics,” said Kyoko Miura, an assistant professor at Hokkaido University.