Never Too Late To Quit: Protective Cells Could Cut Risk of Lung Cancer for Ex-smokers

Protective cells in the lungs of ex-smokers could explain why quitting smoking reduces the risk of developing lung cancer, Cancer Research UK-funded researchers have determined.

Scientists from the Wellcome Sanger Institute and UCL have discovered that compared to current smokers, people who had stopped smoking had more genetically healthy lung cells, which have a much lower risk of developing into cancer.

The research, published in Nature on Wednesday*, is part of the £20 million ($US 26M) Mutographs of Cancer project, a Cancer Research UK Grand Challenge initiative**. The project detects DNA 'signatures' that indicate the source of damage, to better understand the causes of cancer, and discover the ones we may not yet be aware of.

The study shows that quitting smoking could do much more than just stopping further damage to the lungs. Researchers believe it could also allow new, healthy cells to actively replenish the lining of our airways. This shift in proportion of healthy to damaged cells could help protect against cancer.

These results highlight the benefits of stopping smoking completely, at any age.

Lung cancer is the most common cause of cancer death in the UK, accounting for 21% of all cancer deaths***. Smoking tobacco damages DNA and hugely increases the risk of lung cancer, with around 72 per cent of the 47,000 annual lung cancer cases in the UK caused by smoking.**** In the US, it is estimated that around 229,000 cases of lung cancer will be diagnosed in 2020.*****

Damage to the DNA in cells lining the lungs creates genetic errors, and some of these are 'driver mutations', which are changes that give the cell a growth advantage. Eventually, an accumulation of these driver mutations can let the cells divide uncontrollably and become cancerous. However, when someone stops smoking, they avoid most of the subsequent risk of lung cancer******.

In the first major study of the genetic effects of smoking on 'normal', non-cancerous lung cells, researchers analysed lung biopsies******* from 16 people including smokers, ex-smokers, people who had never smoked and children.

They sequenced the DNA of 632 individual cells from these biopsies and looked at the pattern of genetic changes in these non-cancerous lung cells.

The researchers found that despite not being cancerous, more than 9 out of every 10 lung cells in current smokers had up to 10,000 extra genetic changes - mutations - compared with non-smokers, and these mutations were caused directly by the chemicals in tobacco smoke. More than a quarter of these damaged cells had at least one cancer-driver mutation, which explains why the risk of lung cancer is so much higher in people who smoke.

The researchers found that ex-smokers had four times more of these healthy cells than people who still smoked - representing up to 40% of the total lung cells in ex-smokers. 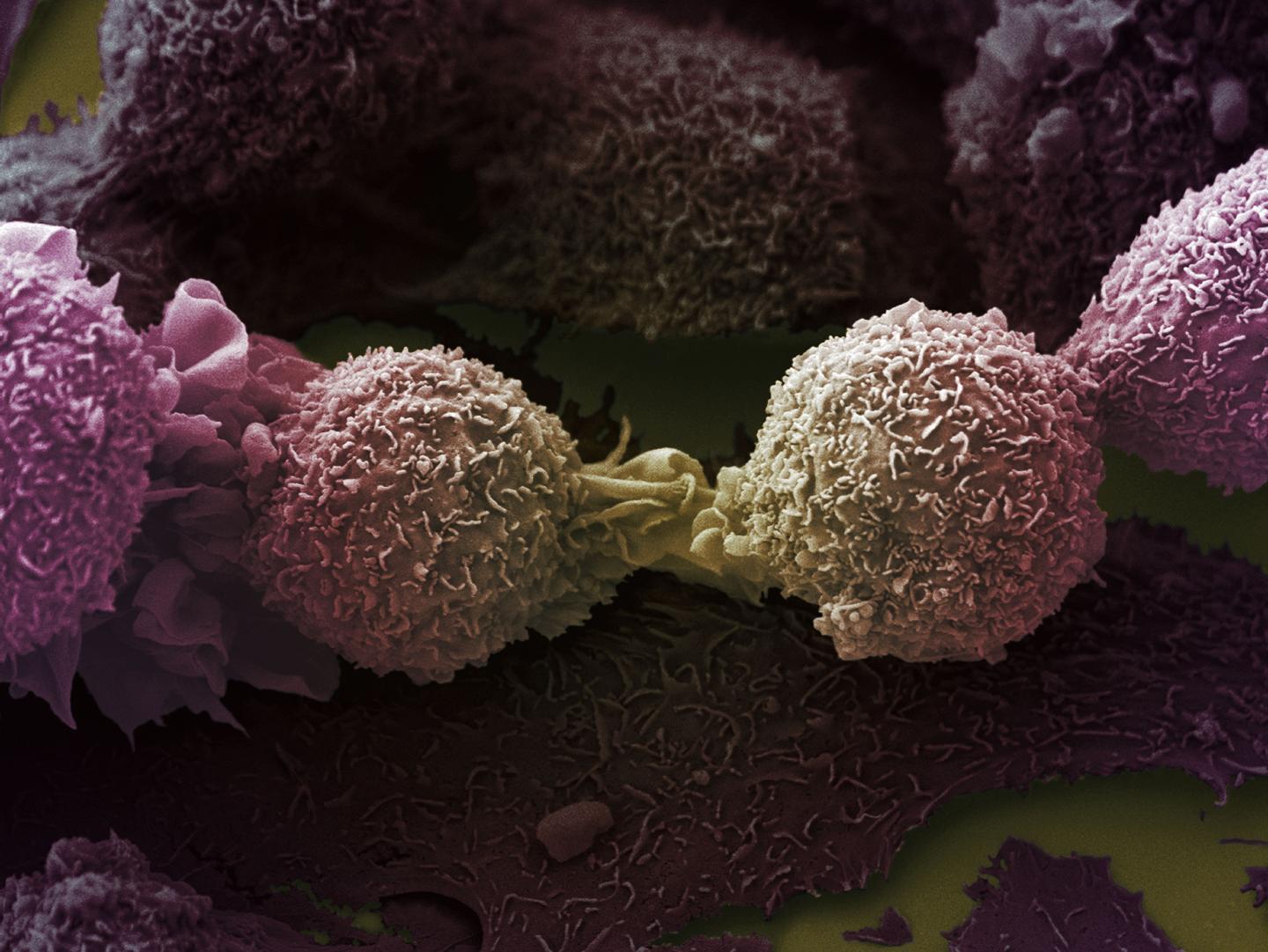 Joint senior author Dr Peter Campbell, from the Wellcome Sanger Institute, said: "People who have smoked heavily for 30, 40 or more years often say to me that it's too late to stop smoking - the damage is already done. What is so exciting about our study is that it shows that it's never too late to quit - some of the people in our study had smoked more than 15,000 packs of cigarettes over their life, but within a few years of quitting many of the cells lining their airways showed no evidence of damage from tobacco."

Dr Kate Gowers, joint first author from UCL, said: "Our study is the first time that scientists have looked in detail at the genetic effects of smoking on individual healthy lung cells. We found that even these healthy lung cells from smokers contained thousands of genetic mutations. These can be thought of as mini time-bombs waiting for the next hit that causes them to progress to cancer. Further research with larger numbers of people is needed to understand how cancer develops from these damaged lung cells."

While the study showed that these healthy lung cells could start to repair the lining of the airways in ex-smokers and help protect them against lung cancer, smoking also causes damage deeper in the lung that can lead to emphysema - chronic lung disease. This damage is not reversible, even after stopping smoking.

Professor Sam Janes, joint senior author from UCL and University College London Hospitals Trust, said: "Our study has an important public health message and shows that it really is worth quitting smoking to reduce the risk of lung cancer. Stopping smoking at any age does not just slow the accumulation of further damage, but could reawaken cells unharmed by past lifestyle choices. Further research into this process could help to understand how these cells protect against cancer, and could potentially lead to new avenues of research into anti-cancer therapeutics." 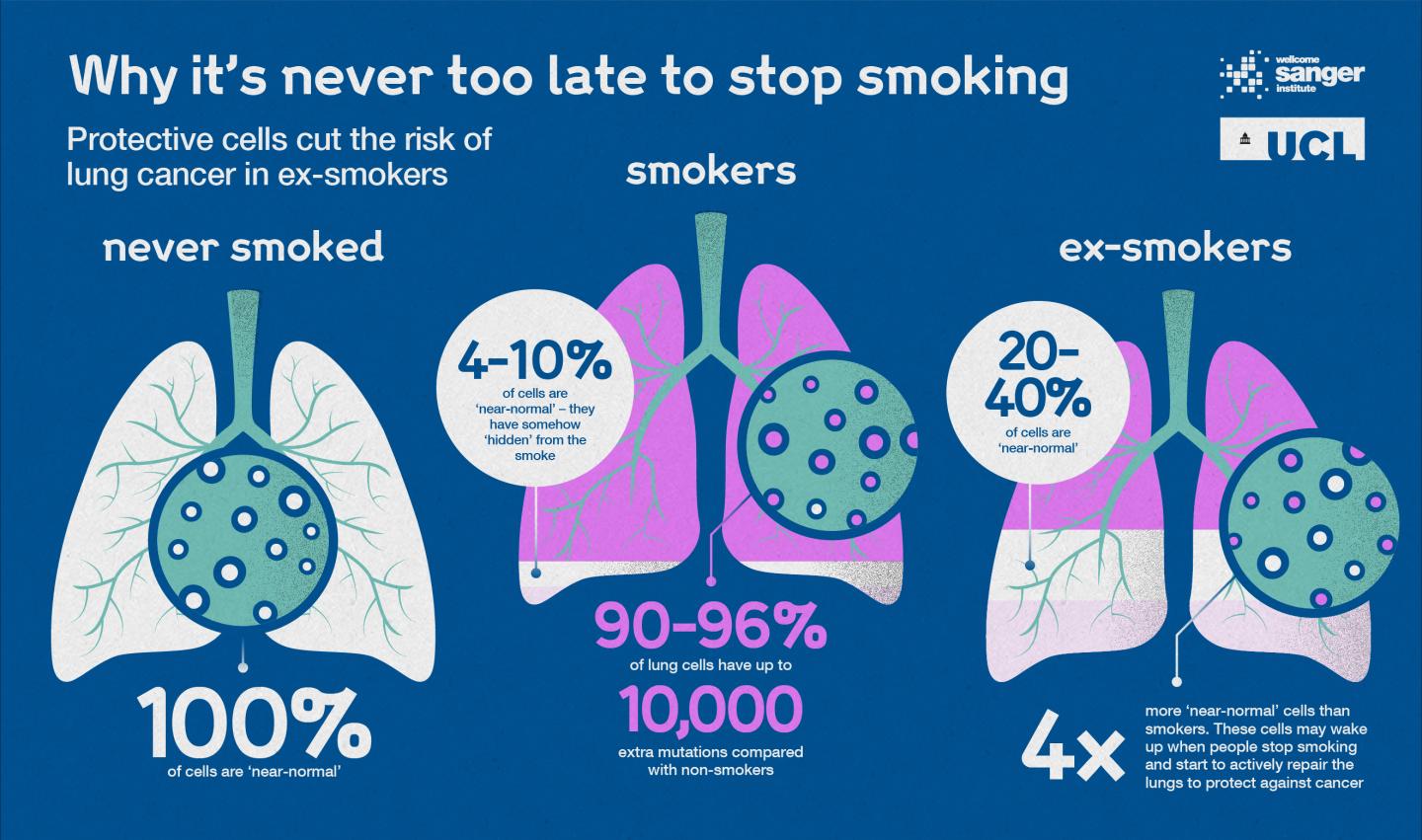 The lungs of ex-smokers contained up to four times as many genetically healthy cells than those of current smokers. Credit: The Sanger Institute / UCL

Dr Rachel Orritt, Health Information Manager at Cancer Research UK, said: "It's a really motivating idea that people who stop smoking might reap the benefits twice over - by preventing more tobacco-related damage to lung cells, and by giving their lungs the chance to balance out some of the existing damage with healthier cells. What's needed now are larger studies that look at cell changes in the same people over time to confirm these findings.

"The results add to existing evidence that, if you smoke, stopping completely is the best thing you can do for your health. It's not always easy to kick the habit, but getting support from a free, local Stop Smoking Service roughly triples the chance of success compared to going it alone."

* Data were provided by: the Office for National Statistics on request, November 2018; ISD Scotland on request, October 2018; the Northern Ireland Cancer Registry on request, March 2019.

**** Patients donated tissue from bronchoscopy investigations for other issues. The bronchial epithelium tissue used in this study was normal rather than diseased tissue.

Link Between Gene and Exercise Capacity

In a study published in The New England Journal of Medicine, a research team has found a link between a genetic mutation that affects cellular oxygen sensing and a patient’s limited exercise capacity.

END_OF_DOCUMENT_TOKEN_TO_BE_REPLACED

Scientists have identified a rare, new cell that plays a key protective role in immunity to infection but – if unregulated – can also mediate tissue damage in autoimmune disorders.

END_OF_DOCUMENT_TOKEN_TO_BE_REPLACED

Automation Journey Guide: How to Automate Simple to Complex Workflows for Achieving Results Beyond High-throughput

END_OF_DOCUMENT_TOKEN_TO_BE_REPLACED

Nuclear Science From Quarks to Cancer

END_OF_DOCUMENT_TOKEN_TO_BE_REPLACED

Research Outlines How Drug in Clinical Trial for Coronavirus Works

END_OF_DOCUMENT_TOKEN_TO_BE_REPLACED

A Molecular Atlas of Skin Cells