Previous work from the Wyss Institute at Harvard University established a protocol for producing human kidney podocytes (a type of cell that helps filter blood in the kidneys) from induced pluripotent stem (iPS) with greater than 90% efficiency, and used those podocytes in a Glomerulus Chip that can recreate in vitro the specialized tissue structure and molecular filtration found in the glomerulus of the human kidney.

Now, using that protocol, Wyss researchers have shown that the differentiated cells exhibit transcriptomic and protein expression profiles that match those of mature podocytes – a feat that no other method has so far been able to achieve. This confirmation of mature podocytes gives kidney researchers across the scientific community a tool for investigating human kidney development, function, and disease; these cells also could potentially be delivered as a cell therapy for kidney diseases in the future. The research is reported in Nature Protocols. 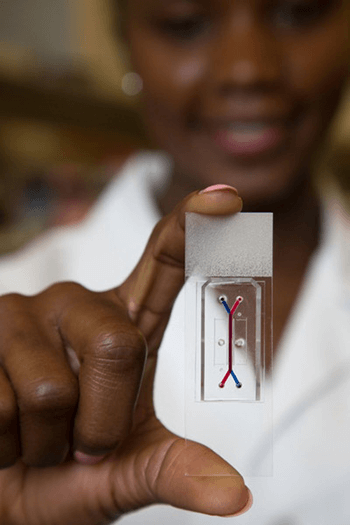 When iPS cells set out to differentiate, they first turn into “progenitor” cells, which only have the ability to form a subset of cell types. Progenitors that are destined to become podocytes first differentiate into nephron progenitor-like cells. While these cells can be used as a proxy for human cells in research, mature cells are of much greater use to researchers and clinicians, as they more closely mimic the cells found in adult organs.

To produce mature podocytes, researchers first created nephron progenitor-like cells from iPS cells, and then exposed them to a new cell culture medium containing a cocktail of five molecules that had been previously shown to play key roles in kidney development and function in vivo. This in vitro differentiation protocol resulted in cells that grew the long “foot” processes and expressed the genes that are the hallmarks of mature podocytes.

“Our method’s ability to produce mature human podocytes from iPS cells with high yield and without the need for subpopulation selection or genetic manipulations offers researchers and clinicians a robust, renewable source of kidney cells for scientific and medical studies,” said Musah, who is also a Dean’s Postdoctoral Fellow at Harvard Medical School.

There are many valuable uses for this protocol of mature podocyte generation, including investigating the steps involved in the differentiation of podocytes from their progenitor cells (a process that remains poorly understood), studying the origin and progression of various kidney diseases including podocytopathies and glomerulosclerosis, and establishing in vitro systems for kidney drug testing and discovery, such as the Glomerulus Chip. The researchers also hypothesize that mature human iPS cell-derived podocytes could one day be used as an injectable form of cell therapy for diseases that are characterized by podocyte loss or dysfunction.

“This method for generating mature human kidney podocytes should be of great value to basic researchers and investigators in regenerative medicine who are interested in studying various types of kidney disease or trying to develop cell-based therapies,” said Donald Ingber, Assistant Professor of Biomedical Engineering at Duke University.

This article has been republished from materials provided by the Harvard Office of Technology Development. Note: material may have been edited for length and content. For further information, please contact the cited source.