Anna is a science writer at Technology Networks. She holds a first-class honours degree in biological sciences from the University of East Anglia, before joining Technology Networks she helped organize scientific conferences.
Learn about our editorial policies
Najin, daughter of Sudan, is one of the last two northern white rhinos on the planet. She is 30 years old. She is Fatu’s mother. Credit: Ami Vitale

Read time:
An international team of scientists has successfully harvested oocytes from the last two remaining Northern White Rhinos (NWR). On August 22nd 2019, ten oocytes were collected from the rhinos living in Ol Pejeta Conservancy in Kenya. Three days later, the team reported that seven of the ten oocytes were successfully fertilized by frozen sperm from two NWRs. The achievement is part of ongoing efforts to save the sub-species from extinction.

Once found roaming across much of Central Africa, populations of NWR have declined rapidly since the 1960’s due to increasing pressures from habitat loss, civil war, and poaching. From a wild population of around 2,000 in 1960, numbers plummeted to 700 individuals in 1970, and by 1984 just 15 remained. Now only Najin and Fatu – two female NWRs incapable of natural reproduction – remain, leaving the sub-species functionally extinct. 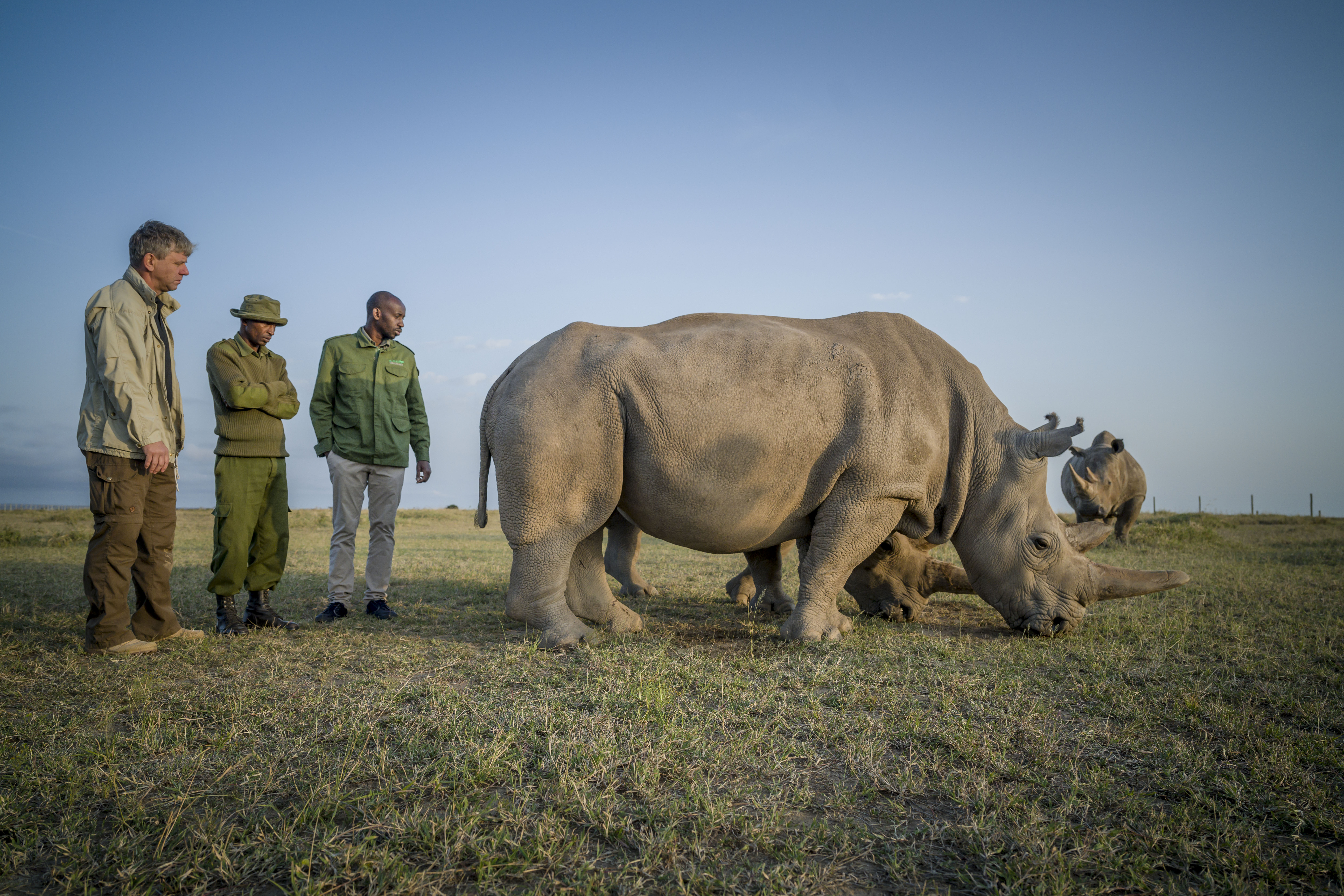 Prof. Dr. Thomas Hildebrandt from Leibniz-IZW (left), Ol Pejeta’s northern white rhino keeper Zachariah Mutai (middle) and Dr. Stephen Ngulu, Vet in charge at Ol Pejeta (right), pay a visit to Najin and Fatu the day before the procedure. The two females were subject to ovarian stimulation two weeks prior to the procedure. Najin is in the front, Fatu is being her and the rhino is the background is Tauwo, a Southern White Rhino. Credit: Ami Vitale
As part of efforts to save NWRs, a project to adapt Artificial Reproductive Techniques (ART) began in 2015, with the aim of creating NWR embryos that could be implanted into surrogate Southern White Rhino (SWR) cows. In July 2018, the project team demonstrated the use of their ultrasound guided device to successfully harvest oocytes from SWRs. These oocytes were used to create the first hybrid Northern-Southern embryos, using sperm from NWRs. “Now we are well prepared to go to Kenya and collect oocytes from the last two NWR females in order to produce pure NWR blastocysts where both eggs and sperm are from NWR,” Professor Thomas Hildebrandt, Head of the Department of Reproduction Management at the German Leibniz Institute for Zoo and Wildlife Research in Berlin, commented in a press release at the time.

Just over a year later, the team did just that.

The multidisciplinary team conducted the procedure on August 22nd. Najin and Fatu were placed under general anesthetic whilst an ultrasound-guided probe was used to harvest oocytes from their ovaries. "We were able to harvest a total of 10 oocytes - 5 from Najin and 5 from Fatu - showing that both females can still provide eggs and thus help to save these magnificent creatures,” said Professor Hildebrandt and Dr. David Ndeereh from the Kenya Wildlife Service in a press release.

"The number of harvested oocytes is a wonderful success and proof that the unique cooperation between scientists, experts in zoos and conservationists in field can lead to hopeful prospects even for the animals that are imminently facing extinction," commented Jan Stejskal from Dvur Kralove Zoo.

The next step is to produce a NWR embryo in vitro.

On August 25th, the team used Intra Cytoplasm Sperm Injection (ICSI) to successfully artificially inseminate 4 oocytes from Fatu and 3 from Najin with frozen sperm from Suni and Saut, two deceased NWR bulls. “Now the injected oocytes are incubated and we need to wait to see if any viable embryo develops to the stage where it can be cryopreserved for later transfer,” said Cesare Galli of Avantea in Cremona (Italy) who led the fertilization procedure. An announcement is due to be made on the success of the procedure around September 10th.

If viable embryos are created, plans would then be made to implant them into surrogate SWR cows, as unfortunately Najin and Fatu are deemed unable to carry a pregnancy. Despite several mating attempts with NWR bulls Suni and Sudan whilst living together at the Ol Pejeta Conservancy, no pregnancies resulted.

Alongside these efforts, the project is also working to increase the genetic diversity of any future possible NWRs by creating induced pluripotent stem cells from other NWRs’ stored tissue. The artificial gametes which can then be created from these cells would help to overcome some of the limitations of relying on only two surviving female NWRs and cryopreserved sperm from just four male NWRs.
Meet the Author