In much the same way PAC-MAN® gobbles through an intense maze of dots eating and destroying its aggressors, researchers from the Charles E. Schmidt College of Medicine at Florida Atlantic University have revealed for the first time how a similar mechanism in the eye lens does exactly the same thing. They have discovered that cells in close proximity to each other can sense when a cell is dying due to environmental stressors like UV light, smoke and other pollutants, and eat the cell before it becomes toxic.

These researchers not only demonstrate that this happens with lens cells, but they uncover the molecules that are required to do it. They also reveal that the molecules needed for the cells to eat each other are degraded by UV light. And when that happens, the cells lose the ability to eat each other. Since these systems are not confined to the eye lens and diseases of the eye such as cataracts, uncovering the mechanisms and functions will provide important information in more complex tissues and disease states. 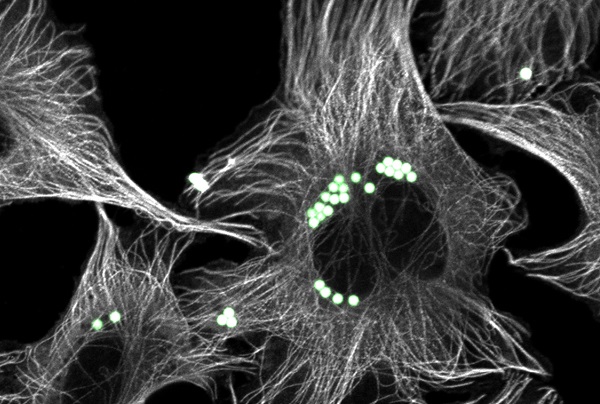 It has long been known that environmental damage is associated with cell death and that it kills tissue because it is toxic. Yet, the eye lens, which does not have a blood supply, gets hit by UV light and other stressors that continuously kill cells. Consistently, the eye lens has evolved multiple protective and repair systems to preserve its transparent function in the face of environmental insults. So how does it do that?

That’s exactly what these researchers sought to understand in this novel study. They were able to establish that the intact eye lens is indeed capable of removing apoptopic lens cell debris and worked to identify a molecular mechanism for this process by lens cells. By using the eye lens as a model, they searched to understand how other cells and tissues might operate in a different way than by using blood cells.

“Accumulation of apoptopic material is toxic to epithelial cell populations, which include the cornea, skin, lungs and other tissue, and is associated with the development of multiple autoimmune, inflammatory, aging and degenerative diseases,” said  Marc Kantorow, Ph.D., author of the paper and a professor and director of graduate studies in FAU’s College of Medicine.

“Identifying the cell systems that protect against the effects of apoptosis-inducing insults is an important step toward understanding and developing therapies to treat these diseases.”

Using embryonic chicken lenses, Kantorow and his collaborators Lisa Brennan, Ph.D., associate research professor; Daniel Chauss, a Ph.D. candidate; and Olya Bakina, a Fulbright scholar and graduate student all in FAU’s College of Medicine, engineered the eye lens cells to be either fluorescent red or fluorescent green – instead of what would normally be a clear lens cell. They created artificial dead green cells and fed them to the red cells. When the green cells ate the red cells, they turned yellow. They observed this mechanism in real-time using microscopy to track the digesting cells and utilized antibodies to specific molecules to determine which molecules were needed for the cells to eat each other.

“It is widely known that cells have very specific functions and that environmental damage is associated with cell death,” said Brennan. “Before this study, the common knowledge was that what removed these dead cells were specialized immune cells that literally go into the tissue and eat these dead cells and that’s how your body got rid of them. We looked at the eye lens as a model to try to search for alternate ways to get rid of these dead cells to keep a tissue alive.”

The eye lens is one of the most environmentally challenged tissues of the body since it lacks protective pigmentation and resides just behind the transparent and surface exposed cornea. Damage to the lens and its components causes age-related cataract formation that remains a leading cause of visual disability despite advances in surgical treatment options.

“Twenty percent of all cataracts are associated with UV light exposure and at some point in their lifetime, most people will get cataracts,” said Kantorow. “Our work has the potential to lead to the development of treatments and therapies that would eliminate the need for surgery, which is the only way to treat cataracts today.”