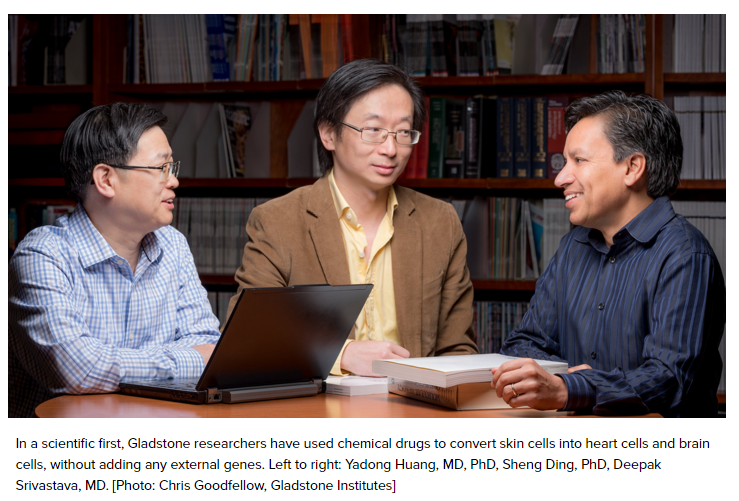 In a major breakthrough, scientists at the Gladstone Institutes transformed skin cells into heart cells and brain cells using a combination of chemicals. All previous work on cellular reprogramming required adding external genes to the cells, making this accomplishment an unprecedented feat. The research lays the groundwork for one day being able to regenerate lost or damaged cells with pharmaceutical drugs.

In two studies published in Science and Cell Stem Cell, the team of scientists, who were led by Gladstone senior investigator Sheng Ding, PhD, and are part of the Roddenberry Center for Stem Cell Biology and Medicine at Gladstone, used chemical cocktails to gradually coax skin cells to change into organ-specific stem cell-like cells and, ultimately, into heart or brain cells. This discovery offers a more efficient and reliable method to reprogram cells and avoids medical concerns surrounding genetic engineering.

“This method brings us closer to being able to generate new cells at the site of injury in patients,” said Ding, the senior author on both studies. “Our hope is to one day treat diseases like heart failure or Parkinson’s disease with drugs that help the heart and brain regenerate damaged areas from their own existing tissue cells. This process is much closer to the natural regeneration that happens in animals like newts and salamanders, which has long fascinated us.”

Adult hearts have a very limited ability to generate new cells, so scientists have searched for a way to replace cells lost after a heart attack, such as transplanting adult heart cells or stem cells into the damaged heart. However, these efforts have been largely ineffective, as most transplanted adult cells do not survive or integrate properly into the heart, and few stem cells can be coaxed into becoming heart cells. An alternative approach pioneered by Deepak Srivastava, MD, director of cardiovascular and stem cell research at Gladstone, used genes to convert scar-forming cells in the heart of animals into new muscle that improved the function of the heart. A chemical reprogramming approach to do the same may offer an easier way to provide the cues that induce heart muscle to regenerate locally.

In the Science study, led by first author Nan Cao, PhD, a postdoctoral fellow in Ding's lab, the researchers used a cocktail of nine chemicals to change human skin cells into beating heart cells. By trial and error, they found the best combination of chemicals to begin the process by changing the cells into a state resembling multipotent stem cells, which can turn into many different types of cells in a particular organ. A second cocktail of chemicals and growth factors helped transition the cells to become heart muscle cells.

With this method, more than 97% of the cells began beating, a characteristic of fully developed, healthy heart cells. The cells also responded appropriately to hormones, and molecularly, they resembled heart muscle cells, not skin cells. What’s more, when the cells were transplanted into a mouse heart early in the process, they developed into healthy-looking heart muscle cells within the organ.

“The ultimate goal in treating heart failure is a robust, reliable way for the heart to create new muscle cells,” said Srivastava, co-senior author on the Science paper. “Reprogramming a patient’s own cells could provide the safest and most efficient way to regenerate dying or diseased heart muscle.”

The chemical cocktail again consisted of nine molecules, some of which overlapped with those used in the first study. Over ten days, the cocktail changed the identity of the cells, until all of the skin cell genes were turned off and the neural stem cell genes were gradually turned on. When transplanted into mice, the neural stem cells spontaneously developed into the three basic types of brain cells: neurons, oligodendrocytes, and astrocytes. The neural stem cells were also able to self-replicate, making them ideal for treating neurodegenerative diseases or brain injury.

“With their improved safety, these neural stem cells could one day be used for cell replacement therapy in neurodegenerative diseases like Parkinson’s disease and Alzheimer’s disease,” said co-senior author Yadong Huang, MD, PhD, a senior investigator at Gladstone. “In the future, we could even imagine treating patients with a drug cocktail that acts on the brain or spinal cord, rejuvenating cells in the brain in real time.”