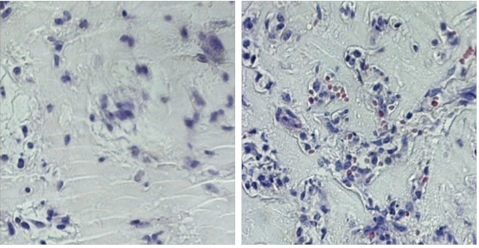 “Pluripotent stem cells grow very quickly, and so they need to churn out large quantities of cellular building blocks to fuel their growth – proteins, lipids, sugars and other essential molecules,” says Dr. Jalees Rehman, who led the study, published in the journal Cell Reports.

Rehman and his colleagues focused on the role of glutamine in stem cells, because the amino acid is known to serve as a major source of carbon used to make cellular building blocks in cancer cells, which, like stem cells, also grow very rapidly. They traced the path of glutamine in human embryonic stem cells and found that it wound up in the cells’ mitochondria.

Glutamine is metabolized at a very high rate in undifferentiated human embryonic stem cells. The researchers observed that glutamine metabolism drops dramatically as the cells differentiate into various mature cell types, such as the endothelial cells that form the lining of blood vessels.

“We wanted to take a closer look at the molecular program linking the decrease in glutamine metabolism to stem cell differentiation,” said Rehman, who is an associate professor of medicine and pharmacology at UIC.

When the researchers selectively withheld glutamine from human embryonic stem cells growing in the lab, they noticed that levels of an important regulatory molecule called OCT4 decreased significantly, and the cells began to differentiate. OCT4 is a transcription factor that activates genes that maintain the cell in a state of pluripotency and silence the genes and prevent differentiation and maturation of the stem cells.

Glutamine withdrawal was also accompanied by a rise in reactive oxygen species within the cells, which can damage cellular structures if levels are too high.

It turns out that OCT4 is especially vulnerable to degradation by reactive oxygen species. As glutamine metabolism drops, and levels of reactive oxygen species rise, OCT4 breaks down and is no longer able to hold the cell in a pluripotent state. The cell then starts to express the genes that allow it to mature into a specific type of cell.

“Glutamine keeps OCT4 ‘on,’ and when you starve the cells of glutamine, you dial down that OCT4 switch so that the cells can then mature,” Rehman said. “It is also important to note that reactive oxygen species served as a signal which allowed stem cells to differentiate. Certain levels of oxidants or reactive oxygen species may be necessary for the maturation of stem cells.”

“When researchers want to produce mature cells from stem cells, they traditionally use a cocktail of growth factors and other chemicals known to produce the specific cell type they want,” Marsboom, said. “We wanted to see what would happen if we added glutamine withdrawal to the differentiation-cocktail we use for producing endothelial cells from human embryonic stem cells.”

“These endothelial cells migrated into place more successfully to form the tubes that make up vascular networks,” said Rehman, which may improve the engineering of functional blood vessels from human embryonic stem cells. More broadly, he said, the finding highlights the importance of metabolic cues in regenerative therapies.

“To successfully engineer new blood vessels or tissues for diseased patients, we need to help stem cells adapt to the metabolic environment and demands of the mature organs.”