The Life Story of Stem Cells

The Life Story of Stem Cells

Stem cells ensure the regeneration and maintenance of the body’s tissues. Diseases like cancer can arise if they spiral out of control. In collaboration with doctors from Aachen University Hospital, scientists from the Max Planck Institute for Evolutionary Biology in Plön have designed a mathematical model for mapping the development of populations of haematopoietic, i.e. blood-forming, stem cells with advancing age. The model uses the telomeres on the chromosomes of blood cells to do this. These protective covers, which are located at the ends of the chromosomes, shrink each time a cell divides. Thus, it is possible to tell how many times a cell has already divided from its length. Deviations from normal age-related length distribution could be indicative of disease.

Stem cells are the origin of all specialised cells: when they divide, precursor cells are formed, which reproduce in turn and gradually differentiate into mature cells. During blood formation, for example, several billion different blood cells are formed every day from stem cells in the bone marrow. The number of stem cells increases in childhood, but is approximately constant in adulthood. In adults, cell division usually gives rise to a new stem cell and a precursor cell – the number thereby remains largely constant. 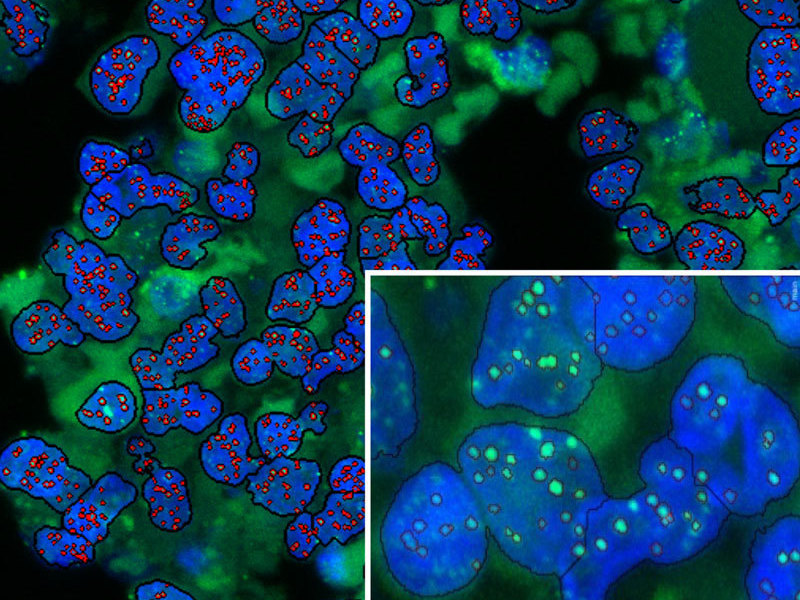 Although haematopoietic stem cells are very long-lived, they are subject to ageing processes. As a result, they run the risk of gradually developing mutations in their genetic material. Mutated stem cells can thus arise which may grow uncontrollably and lead to the development of cancer. It is, however, difficult to establish the exact connection between the age and “division history” of stem cells, on the one hand, and their risk of malignant degeneration and the associated disease risks for patients.

Benjamin Werner and Arne Traulsen from the Max Planck Institute for Evolutionary Biology in Plön therefore worked in cooperation with Fabian Beier and Tim Brümmendorf from Aachen University Hospital to calculate the development of the stem cells. With each cell division, the telomeres shrink slightly – until no further division is possible. “The length distribution of the telomeres therefore reflects the earlier divisions of a cell and we can draw conclusions about the stem cells, from which the finished cells were formed,” explains Werner. “Data were already available on average telomere lengths but not on their distribution. Previous models were not connected to this kind of data. We now made this step,” adds Traulsen.

The scientists analyzed the blood cells of a total of 356 healthy test subjects of all ages and determined the distribution of the telomere lengths for 56 of them. Using these data, the team then tested different mathematical models in order to describe the length distribution for each age. “It turned out that the model that described the data  best was the one that also took the growth of the stem cell pool into account,” explains Werner. Stem cells can proliferate if, instead of dividing into one stem cell and one precursor cell, they divide into two daughter stem cells. Such symmetrical divisions are particularly common in children.

“Thanks to the model, a snapshot of the current telomere length distribution is now in theory sufficient to find out about the past and future state of a person’s telomeres. We can identify the stem cell population at any point in time,” says Traulsen. This enables the prediction of diseases and identification of risk groups. For example, there are indications that people with an optimal average number of stem cells are at the lowest risk of developing cancer. “On the other hand, much shortened telomeres can favour the emergence of certain diseases,” says Beier.

The scientists now plan to examine these possible links using their model. “This could improve both diagnostics and prognostic assessment and, based on this, the targeted treatment of certain blood diseases in the future,” says Brümmendorf.