Complete the form below to unlock access to this Audio Article: "The Mending Tissue - Cellular Instructions for Tissue Repair"

A collaborative study led by scientists at the Mechanobiology Institute (MBI) at the National University of Singapore (NUS) has described a universal mechanism that regulates forces during epithelial tissue repair. This work, was led by MBI co-Principal Investigator Professor Benoit Ladoux and conducted in collaboration with scientists from the Pierre et Marie Curie University, France; the Institute for Bioengineering of Catalonia, Spain; Chronic Disease Research Centre, Portugal, the Weizmann Institute, Israel; and the Cambridge University, UK.

The epithelial tissue, or the epithelium, is one of four major types of tissue that lines the surfaces of all organs and hollow spaces in our body. The epithelium protects the organs from damage and maintains the body in a state of balance by allowing a selective in-and-out passage of substances. Proper function of the epithelium requires an intact layer of epithelial cells. 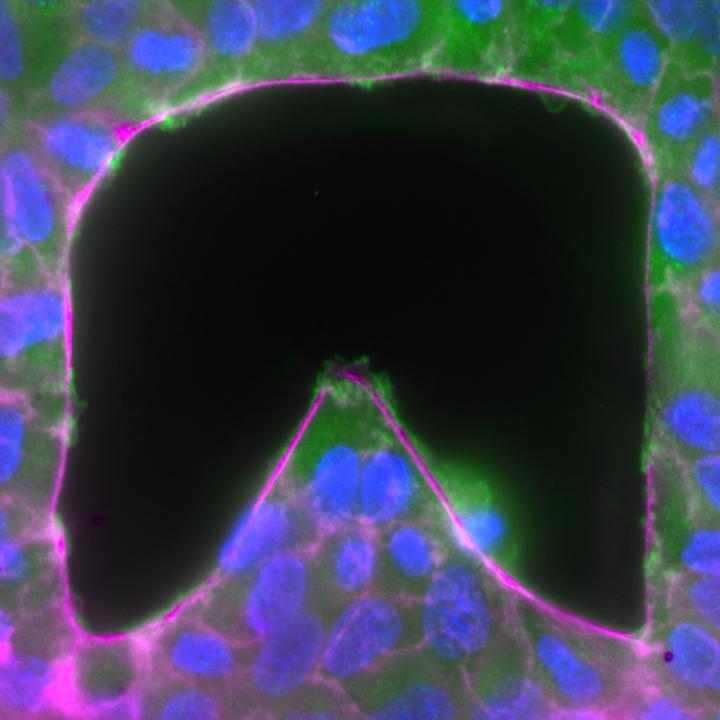 During the lifetime of an organism, gaps or holes of different sizes and shapes are introduced into this intact epithelium. They may appear as a consequence of natural biological processes such as embryo development when cells move around and rearrange to establish body patterns, or during cell turnover in adult tissues, when dead cells are cleared away by neighbouring healthy cells. In addition, injury or disease may also lead to wounds or ulcers in the tissue. In either case, any gap in the tissue needs to be sealed so that the normal functioning of the tissue is restored.

In the likelihood of an open wound or gap causing complications such as infections, inflammation or even cancer, our body has developed two major repair mechanisms whereby cells surrounding the gap collectively move in and seal the open spaces completely.

To do so, cells either put forth finger-like protrusions called lamellipodia to crawl along the underlying surface or form an interconnecting belt or cable of actin filaments and myosin proteins. When this cable contracts, it pulls the cells closer in a coordinated fashion, similar to the action of drawing a purse-string. However, the extent to which either mechanism contributes to tissue repair is known to depend on several factors such as the gap geometry, gap size or the presence or absence of an underlying supporting surface.

To determine the impact of tissue geometry on gap closure, the international research team studied the effects of gap shapes on gap closure mechanisms.

By using microfabrication techniques to grow epithelial cells around stencils made of an inert polymer, they created gaps of desired shapes within the cell culture. The boundaries of the gap were either protruding inwards (concave edges) or were extending away (convex edges).

Interestingly, the researchers noted that the speed at which cells along the gap edge moved depended on the local curvature. Specifically, they found that cells at the convex edge moved in faster than those at the concave edges. To test the relevance of their findings in a living system, the researchers studied wound repair in flies and found a similar association between wound shape and wound repair.

The current study has identified a universal mechanism that explains how the geometrical properties of tissue regulate forces and guide cellular movement during physiological processes such as cell turnover, embryo development and wound healing. Cells essentially receive the instructions on how to close a gap by sensing and measuring the shape of the gap itself. Further understanding of how cells do this will help researchers know how to treat chronic medical conditions involving wounds or unsealed gaps as well as designing new substrates to optimise tissue regeneration.