I Understand
Diagnostics
from TECHNOLOGY NETWORKS

The need for accurate, robust, and easy-to-use diagnostic tools was a common theme at this year’s AACC, which, in its 69th year, drew a record-breaking 21,300 attendees to San Diego.

The meeting focused on advances in diagnostics research and technology that solve a broad range of patient and public health problems. Mass spectrometry continues to make inroads into clinical chemistry thanks to innovations in instrument design and software that improve usability for non-experts. Diagnostic kits that are simplified, standardized, or preformulated continue to grow in popularity as a means of reducing the technically demanding, time-consuming, and, at times, error-prone laboratory developed tests (LDTs).

Thermo Fisher Scientific previewed its new Cascadion SM Clinical Analyzer, which the company says is the first fully integrated LC-MS/MS clinical analyzer.  Under development for six years, the instrument design is focused on ease of use for non-expert users.  “For much of what we do in terms of chromatography and mass spectrometry, we need very highly skilled and experienced medical technologies,” says James Nichols, PhD, Medical Director/Chemistry and Point of Care Testing at Vanderbilt University Medical Center. “The Cascadion analyzer is relatively maintenance-free and because it includes specially designed reagent kits, there is not a lot of interaction required with the technology." Reagent kits designed for use with Cascadion also help reduce interaction of non-experts with the instrument. 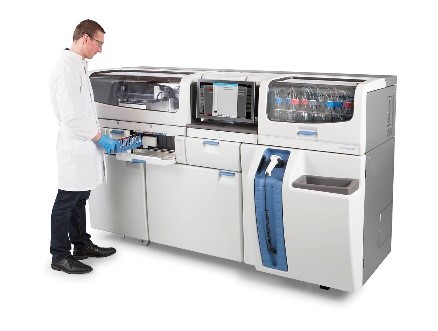 The Thermo Scientific™ Cascadion™ SM Clinical Analyzer* combines the ease of use of conventional clinical analyzers with the selectivity and sensitivity of liquid chromatography-tandem mass spectrometry (LC-MS/MS). As the first-ever fully integrated, fully automated LC-MS/MS clinical analyzer, this easy-to-use system is specifically designed to address the needs of clinical laboratories.

“Building on our leading mass spectrometry platform, Cascadion has the potential to set new standards in the measurement of specialty small molecules in clinical laboratories.”

SCIEX also boasted a milestone with the launch of the first LC-MS system designed specifically for clinical diagnostics. They did this by adapting their Topaz™ system specifically for making LC-MS more accessible to clinical lab staff. The system includes software that simplifies and streamlines workflows and improves usability for non-experts.  Dr. Jim Ritchi, Professor, Pathology & Laboratory Medicine at the Emory University School of Medicine, says the system approaches the level of automation “close to that of a chemical analyzer… It was easy to train Med-Techs on and easy to learn to operate, adopt, and sustain in our clinical lab.” The Topaz launch coincided with SCIEX’s introduction of the first FDA-cleared LC-MS-based Vitamin D assay kit via the de novo pathway, meaning all future assays will have to show equivalence, SCIEX says. Traditional immunoassays can under or over report Vitamin D levels.

Many new diagnostic products at AACC underscored the benefits of standardization—a trend that will continue to accelerate in the wake of recent FDA guidance away from LDTs—but some of the most noteworthy announcements highlighted the expanding utility of biomarkers. New assays claim to diagnose a heart attack in less than ten minutes, provide colonoscopy-free colorectal screening, or mitigate public health crises such as antibiotic resistance.

Roche, which has seen its FDA approvals hit double digits in 2017, highlighted its Elecsys® Tropinin T Gen 5 STAT, an assay that can identify a heart attack in less than 10 minutes. The test could significantly ease the burden on emergency rooms, where just a small percentage of patients who believe they are having a heart attack actually are. Additionally, Roche’s cobas® c 513 analyzer can drastically cut analysis turnaround in diabetes testing. The instrument also doubles the throughput of testing to 400 patients per hour—a key innovation as diabetes rates in the US are reaching epidemic proportions.

Diagnostics solutions that can help doctors stem the growth in antibiotic resistance or improve treatment of sepsis, a notoriously difficult condition with a high mortality rate, were also a focus at this year’s AACC. Unnecessary antibiotic use is one of the primary causes of antibiotic resistance and stems from healthcare providers’ difficulty in determining whether an infection is bacterial or viral in nature.

In a speaker session, Rex Astles, Ph.D., of the CDC Division of Laboratory Systems (Atlanta, GA), described how his team developed an algorithm that could use Medicare outpatient claims to detect an influenza outbreak three weeks earlier than the CDC National Respiratory and Enteric Virus Surveillance System. Eran Eden, Ph.D., of MeMed Diagnostics (Tirat Carmel, Israel), separately described how his company’s host-immune based ImmunoXpert assay measured the serum levels of three protein biomarkers—TRAIL, IP-10, and C-reactive protein—in 233 pediatric patients to classify an infection as bacterial or vial. When compared to diagnoses made by a physician panel and multiplex polymerase chain reaction (PCR), they found that ImmunoXpert correctly classified 90% of bacterial cases and 91% of viral cases. The test’s accuracy could enable healthcare providers to quickly characterize pediatric infections and avoid inappropriate antibiotic use. “We found that this test was superior to the traditional tests that are out there, and this was independently validated in a double-blind manner,” Eden said. “We saw a consistent response and a high performance across a variety of viruses, indicating that this test could be useful in future epidemics.”

Meanwhile, procalcitonin—a biomarker that is detected in the bloodstream within 3–6 hours of infection, but is not upregulated in viral infections and returns to normal as the infection resolves—is also helping doctors better manage their antibiotic treatments. Biomereiux’s B.R.A.H.M.S. procalcitonin biomarker test was recently cleared for expanded use in the US to help clinicians determine the appropriate antibiotic therapy for patients with lower respiratory tract infections. In addition to helping providers detect a bacterial infection, B.R.A.H.M.S. also helps determine when antibiotic therapy can be discontinued. Results are available in only 20 minutes.  At a session sponsored by Biomereiux, Drs. George Sakoulas and Mike Broyles also discussed how B.R.A.H.M.S. can help identify patients suffering from sepsis and monitor their response to an antibiotic.

Cancer remains a focus of clinical chemistry given the correlation between early detection and improved patient outcomes. Kidney cancer is particularly challenging, given that asymptomatic tumors can leave patients with a poor prognosis once diagnosed. In one speaker session, Chunni Zhang, Ph.D. of Jinling Hospital in Nanjing, China, described identifying two microRNAs that showed the largest decrease in the blood samples of 33 renal cell carcinoma patients compared with 33 healthy individuals. The findings could be used to develop the first-ever blood test for renal cell carcinoma.

Beckman Coulter recently received 510(k) clearance from the FDA for its latest flow cytometry product for the clinical laboratory, ClearLab IVD 5-color antibody cocktails for leukemia and Non-Hodgkin’s lymphoma immunotyping. Preformulated reagents mean clinical labs don’t have to waste valuable time validating their own antibody cocktails, Beckman says. “Flow Cytometry is a powerful tool for the detailed and fast analysis of complex populations, with the technique becoming increasingly valuable to the clinical hematology laboratory,” says Dr. Mario Koksch, vice president and general manager of Beckman Coulter Life Sciences’ Cytometry Business Unit. “Clearance to market of the first IVD [leukemia and lymphoma] reagents in the US has opened the door to the expansion globally of our clinical reagent and instrument portfolio.”

The nationwide epidemic in opioid addiction was also a topic of discussion at this year’s AACC. Drug overdoses are estimated to have killed over 59,000 Americans last year, making it the leading cause of death for people under the age of 50. This presents healthcare providers with a dilemma—how to ensure access to treatment without contributing to escalating rates of addition.

A team of researchers at AutoGenomics found 15 genetic mutations involved in brain reward pathways that potentially help identify patients at risk for addiction. Using a set of samples from additional patients and non-affected individuals, the researchers then designed a predictive algorithm to distinguish between the two populations.  “The utility lies in identifying the at-risk population, if you can, before they get exposed to opioids, says Prescient Medicine CEO Keri Donaldson, M.D. “Using this type of testing in the normal workflow prior to elective surgeries—prior to patients getting that first exposure to opioids—that’s where this makes sense.”

For those already receiving treatment for opioid addition, Thermo recently received approval for its CEDIATM Buprenorphine II Assay, a new immunoassay to detect buprenorphine and three of its major metabolites. “The ability to detect each of these metabolites is important because it minimizes the potential for false-negative results,” says John Kody, Thermo Fisher Scientific vice president and general manager/clinical diagnostics,. This helps screen patients receiving treatment for opioid addiction by accurately differentiating buprenorphine treatment samples from patients being treated with Slow-Release Oral Morphine therapy.

Better healthcare on the horizon

Advances in clinical chemistry continue to play a key role in enabling better healthcare outcomes. New tests are pushing the boundaries of what medicine once thought possible, with faster, more accurate, and less invasive diagnostic tools being steadily brought to market. Meanwhile, the addition of mass spectrometry in routine clinical testing—with simplified workflows and accessible software—has the potential to be the next game-changer for diagnostics in the clinical setting.

END_OF_DOCUMENT_TOKEN_TO_BE_REPLACED

Synthetic System Can Regenerate Its Own DNA and Proteins