Complete the form below and we will email you a PDF version of "Cancer Genetics: Key to Diagnosis, Therapy"

The human genome project provided scientists with an atlas for navigating genes associated with cancer and other diseases. “Next-generation sequencing (NGS) was the driver that made these technologies practical,” comments Antony Newton, Sr. VP for Pharma Partnering at PGDx (Baltimore, Maryland, USA).

CentoGenome® enhances state-of-the-art WGS technology with expert filtering and interpretation of data, a skill that few physicians or analysts possess. Together with CENTOGENE’s proprietary mutation database (CentoMD®) and the highest level of medical interpretation and reporting, CentoGenome® provides definite answers for patients with unresolved diagnoses. 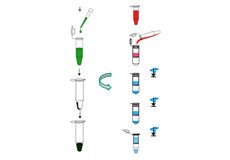 Polymer Mediated Enrichment (PME) free-circulating DNA Extraction Kit is based on a new, patent-pending technology. In the first step cell-free DNA is captured by a polymer. Afterwards this complex is collected as a pellet by centrifugation. Subsequently the captured nucleic acid is dissolved in a special buffer and extracted. 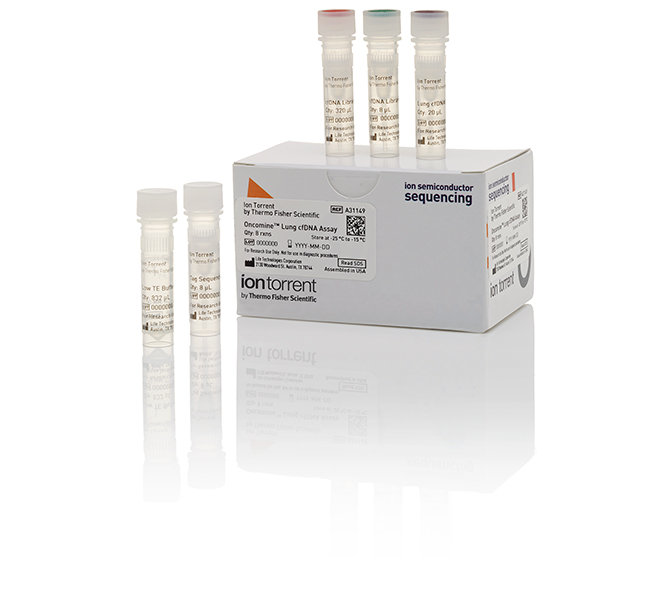 Empowering tumor heterogeneity and reoccurrence research studies from minimal input DNA, the Oncomine™ Lung cfDNA Assay is a tumor type–specific, multi-biomarker next-generation sequencing (NGS) assay that enables detection of somatic mutations, down to a level of 0.1% with >98% specificity, in genes found in plasma samples.

Vogelstein’s work on mutations in colorectal and other cancers now comprise the governing paradigm for cancer genetics and have made Vogelstein the most highly-cited scientific author on the subject. As a physician-researcher Vogelstein recognizes the importance of translating genomic discoveries into practical knowledge, and this has become the goal of PGDx.

NGS allows scientists to peer into cells and tissues, directly at genes responsible for cancer, and ask which features of a tumor are most relevant to treatment. This capability, along with the emergence of gene- and pathway-targeting therapies, enable an unprecedented level of treatment specificity.

Detailed genetic analysis is unfortunately resource-intensive. Dramatic cost reductions notwithstanding, the oncogenetic study relies heavily on bioinformatics to answer the question of which genes to study and how deeply. Since instrumentation and methods possess inherent error, the number of times a particular gene is addressed during analysis supplies statistical validation.

Thus, the emphasis nowadays   on gene subsets consisting of up to 200 known “bad actors.” Compared with whole-genome sequencing of 20,000 genes, subset studies allow investigators to assess a particular genetic region about 1000 times more deeply than they could feasibly do on the intact genome.

Newton explains: “With whole genome sequencing you examine every base pair, the exons and the introns that do not code for protein, no more than about 30 times. Sequencing only the expressed genes provides some leverage - you can look at each 150 times. Targeted sets allow very deep analysis, where you can do 1000 times as many reads. Clearly this exercise is a trade-off between coverage and depth.”

One year ago, Cancer Genetics was in discussion with three pharmaceutical companies  to assist with clinical trial assays for myeloma, lymphoma, and lung cancer. The parties soon recognized the value of supplementing genomics with immuno-oncology studies to provide a more complete picture of drug response. Today Cancer Genetics is involved in more than twenty-five immuno-oncology trials.

“In genomics you’re looking at gene expression, activity, and mutation,” Sharma explains. “In immuno-oncology you examine immune system markers that may include proteins, peptides, and antigens. In this context DNA and RNA are surrogates, and do not provide the same direct touchpoint as immune markers.” DNA/RNA analysis requires extraction to obtain genes of interest, but cells may remain intact for immune marker analysis; proteins or antigens are often captured outside the cell.

For example, the tumor marker PDL1 exists on tumor types that respond to checkpoint inhibitors, a relatively new class of anti-cancer drug. PDL1 binding to its receptor on immune system cells signals the cells not to attack. Expression of PDL1 is a relevant drug discovery tool, but most companies investigating checkpoint inhibitors also use data on immune markers and their mutations.

“As trials move more toward combination therapies with a particular genomic pathway in mind, they will also consider ways to stimulate the immune response to heighten the drug’s response or durability,” Sharma tells Technology Networks. “It’s a very exciting that science is moving towards a more integrated view of cancer. And, since the technology available today is accessible and inexpensive, we’re looking at price points that make more sense for routine discovery and clinical trials.”

Sharma describes the trajectories of targeted and combination therapies as a “collision course,” but not in the usual pejorative way. He predicts more partnerships, particularly as a result of increasingly sophisticated cancer diagnostics and prognostics that fine-tune tumor characterization.

“We have tremendous insight but clinicians and insurers remain the choke points in delivering innovation to patients,” he laments. These gate-keepers – insurers in the United States, governments in Europe and the U.K  . – are insufficiently aware, trained, or willing to embrace innovative technologies which, on the surface, cost more than traditional treatments. “The bioinformatics we employ for pan-omics studies are amazingly complex, but are nothing compared with the issues involved in convincing bureaucrats of the value of this work. Innovation is fast and far outstripping our ability to bring such products to market.”

Conventional sequencing, including next-generation platforms, analyze DNA or RNA from homogenized samples. “Our method eliminates that step,” says Shawn Marcell, CEO of ReadCoor. Fluorescent in situ sequencing (FISSEQ) takes intact specimens, mounts them on a slide as a pathologist might, and sequences genetic regions of interest in place and in three dimensions on tissue samples tens of microns thick. “You get all the genetic elements in the sequence of interest plus their locations within the sample. FISSEQ will eventually allow investigators to make more-informed decisions about therapy.”

From the perspective of genetic analysis, FISSEQ provides as much information as next-generation sequencing. “It’s unequivocally as complete,” Marcell adds.

The scientific groundwork for FISSEQ was developed by Prof. George Church at Harvard University in 1999. Church used polymerase chain reaction, a gold-standard gene amplification technique, to expand DNA within localized, geometrically restrained regions of a sample. On this basis Church developed solid-phase PCR, which when coupled with fluorescence detection led to FISSEQ.

After publishing his landmark paper in 2003 in Nature Protocols, Church continued to expand his method’s capabilities. In 2012 a multidisciplinary team including engineers at the Harvard Wyss Institute built the first high throughput FISSEQ sequencer. This year Harvard licensed a substantial IP portfolio and associated knowhow to ReadCoor for commercialization.

Subsequently, FISSEQ was adapted to single molecule profiling of alternative pre-mRNA splicing, for re-sequencing the genome of an Escherichia coli strain, and for profiling RNA transcripts.

Tumors are genetically heterogeneous, consisting of coexisting cancerous and healthy cells that respond differently to treatment. Using FISSEQ on both cultured cancer cells and intact specimens, investigators can characterize a tumor’s spatial organization.

Oncology, specifically precision medicine for ovarian, breast, lung, and pancreatic cancers, is a ReadCoor specialty. “These projects all involve tumor gene distribution where heterogeneity of genetic markers are relevant,” Marcell says. “The idea is to provide a more comprehensive picture than is possible either through conventional biopsy or sequencing.”

Genomics will enable re-examination of cancer drugs that have failed in clinical testing due to toxicity or lack of effectiveness. From a drug development perspective, gene tests can identify patients likely to benefit from a treatment while sparing non-responders the potential ill effects, and developers the added cost, of administering drugs that cannot work.

For example, developers have used the myChoice® HRD test from Myriad Genetics (Salt Lake City, Utah, USA) to identify more than twice as many potential responders to the oral ovarian cancer drug niraparib than were identified by testing for the BRCA gene alone.

According to Johnathan Lancaster, M.D., Ph.D., Chief Medical Officer at Myriad, “Patients who tested positive with myChoice HRD experienced a clinically meaningful improvement in progression-free survival, and identifies more than double the number of patients who may benefit compared to germline BRCA testing alone.”

Liquid biopsies, which examine tumor DNA in blood, target an even more limited genetic subset, about 100 genes, so 20,000x coverage is practical. “But, the benefits are you can take real-time measurements independent of expensive, difficult-to-obtain solid tissue biopsies.” Liquid biopsies permit multiple analyses during a clinical trial or treatment to quantify the patient’s response changes over time.

Newton notes, “The ability to identify relevant tumor alterations over the course of therapy is already proving to be of real value to drug developers.”

An important point often missed in this discussion is which genetic baseline to use in determining mutations and their frequency. PGDx uses a patient’s own DNA to weed out normal genetic variations that appear to be cancer-linked. A study published by PGDx last year validated this approach. Based solely on historical standards, about 25% of normal genes would be mis-identified as cancer-causing mutations.

The challenge here is conversion of DNA into sequenceable entities while preserving complexity, identity, and composition. Rubicon uses proprietary stem-loop adapter chemistry that consolidates and streamlines preparation while preserving more sample for analysis. Preparation occurs exclusively in a single tube, which eliminates the 20-40% sample loss involved in each sample transfer manipulation, and operator error as well.

Sample preservation ties into an important aspect of cancer genomics. Five years ago determining mutations below 5% frequency was impossible using conventional library prep since tumors are comprised of mixed cell populations with mutated DNA at very low concentration. Even newer NGS incurs an error rate of about 1%. “This is why clinical labs using traditional library preparation may be unwilling to call any mutation below 5%,” Jan explains. Rubicon’s library preparation technology gives investigators a fighting chance of having enough material to make definitive conclusions.

The question of which genes to select for analysis sits like a 600-lb. gorilla in all these discussions  . Dr Jan refers to “actionable” genes. “But as we learn more and techniques improve the information at our disposal can only increase. Most assays today look at a few thousand bases and sequence very deeply. In the future, we will be casting a wider net to catch contributions from many genes, to uncover the full effect between disease and genetic mutations, which may eventually lead to routine whole-genome testing.”