Complete the form below and we will email you a PDF version of "Immunoassays: A Guide"

Immunoassays are a valuable tool in industry and the life sciences. These tests are to thank for better disease treatments, safer food and water and advances in biological research. In this guide, we will delve into immunoassays, explaining what they are, the different types and their applications.

What is an immunoassay?

Immunoassays are biochemical tests used to detect the presence or concentration of a specific chemical, such as a toxin or hormone, in a solution using antibody-antigen reactions.

Antibodies are Y-shaped proteins produced by the immune systems of humans and other animals in response to foreign substances (antigens) like bacteria, toxins and viruses. Antibodies are antigen-specific, with the binding sites on the antibody and antigen acting as a sort of lock and key. Immunoassays use this antibody-antigen bonding relationship to identify specific molecules in a solution. In immunoassays, antigens are called analytes. 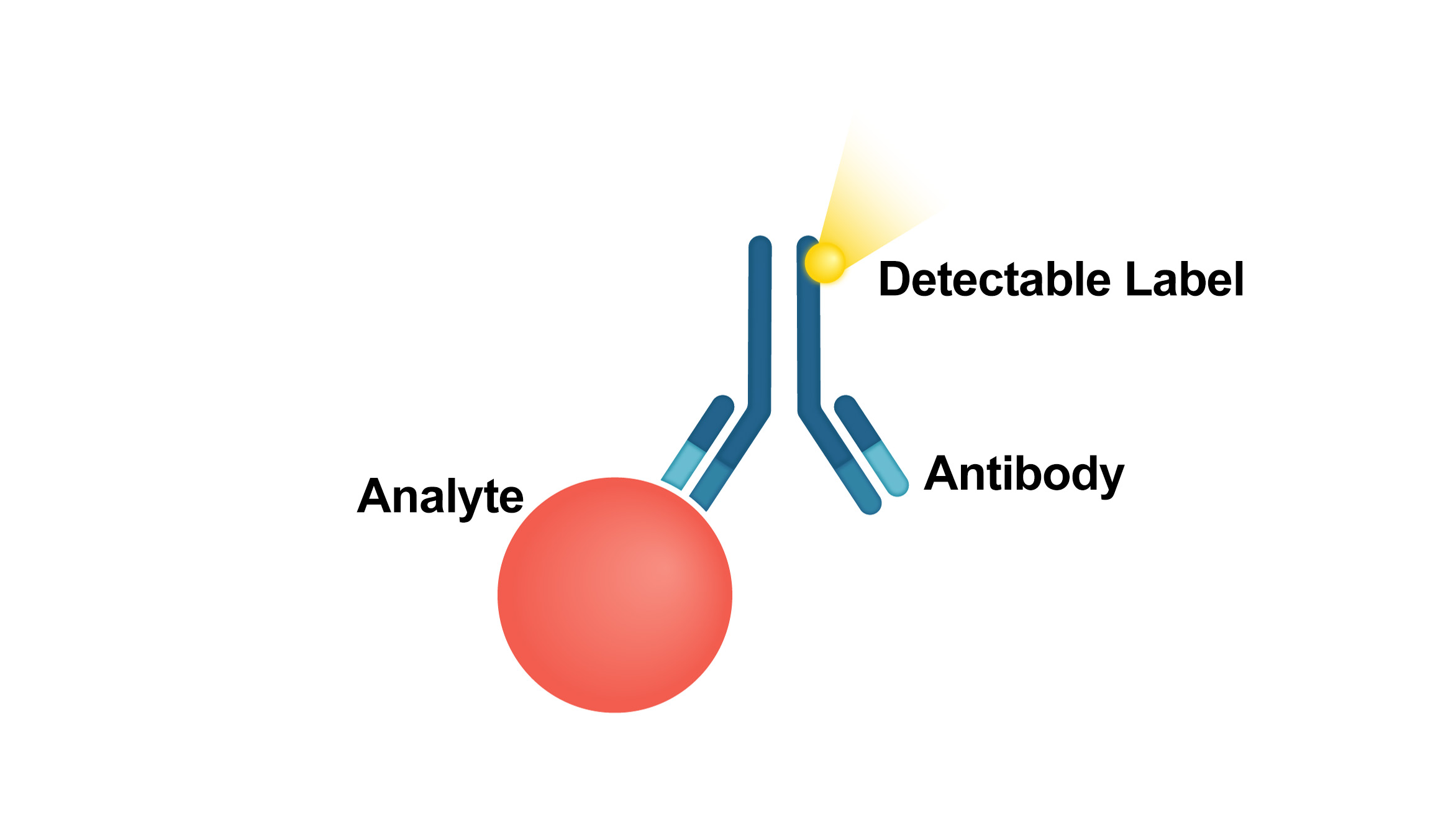 The critical components of an immunoassay: an analyte, an antibody, and a label that can be detected.

What are the different types of immunoassay?

Let us take a look at some of the most popular types of labeled immunoassays.

What is an enzyme immunoassay?

An enzyme immunoassay (EIA) uses an enzyme linked to an antibody to detect the antibody-antigen compound via enzymatic reactions. EIAs are commonly used because they are safe and simple. Some examples of EIA include pregnancy tests or HIV tests.

What is an ELISA?

Enzyme-linked immunosorbent assay (ELISA) is another term for EIA. There are four main types of ELISA: direct, indirect, sandwich and competitive. In each type, the basic principle of detection is consistent, but the arrangement of antigen and antibody changes. In a lab, these tests are usually conducted in multiwell plates, and there are several steps that can be followed to maximize ELISA success.

What is a radioimmunoassay?

What is a fluorescent immunoassay?

Fluorescent immunoassay (FIA) uses fluorophores as the label, measuring fluorescence to determine analyte concentration. Background radiation from the sample itself can complicate FIA, so elements called lanthanides are often used. The emissions from such elements have a decay time far longer than that usually produced by biological samples, allowing the FIA signature to be discerned.

What is a chemiluminescent immunoassay?

What are the applications of immunoassays?

Immunoassays are easy to perform, and as such, they are widely used. Here are some common immunoassay applications.

One of the fields for which immunoassays are essential is disease diagnostics and treatment. For instance, immunoassays are used in cancer diagnostics, pregnancy tests and therapeutic drug monitoring. These bioanalytical tests can examine the response to pharmaceutical drug treatments for conditions like HIV and cancer. They’re also used in workplace drug-testing.

Biopharmaceutical drugs are those that have been extracted, synthesized or manufactured from or in a biological source. Immunoassays are valuable tools used in biopharmaceutical research and development, including vaccines and gene and cell therapy.

Immunoassay is widely used in food production and development to detect dangerous contaminants or allergens. For instance, immunoassay tests can look for gluten, toxic chemicals, heavy metal contamination, or pathogens like E. coli.

More recently, immunoassays have entered the environmental realm. Immunoassay technology is employed to detect contaminants in the environment. For instance, immunoassays test for certain pesticides, PCBs (polychlorinated biphenyls), and other toxic compounds in surface and ground water.

What are the advantages of immunoassay tests?

Immunoassay tests are widely used thanks to their many advantages. Immunoassays are: