Complete the form below and we will email you a PDF version of "New Frontiers in Freezing: Cryopreservation Advances"

Cryopreservation, freezing live biological samples at sub-zero temperatures, evokes scenes from science fiction movies of long journeys across the cosmos or reanimation of terminally ill individuals in a future that has an available cure. Although cryopreserving people evidently remains the domain of science fiction, mammalian cell cultures, primary cells, tissues, microbes, plant cell lines and seeds, and even whole organisms, such as C. elegans worms are presently amenable or in the pipeline for cryopreservation. Cryopreserving whole mammalian organs, though currently infeasible, is an active and expanding area of research, potentially increasing availability of material for organ transplants.

In addition to a broad scope of possible biosamples for cryopreservation, there are also numerous prospective applications. Cryopreservation is a potential technology in reproductive medicine for freezing oocytes and is also being investigated to bank biosamples for biodiversity and conservation efforts. In biomedical and biological research, cryopreservation is already widely used in the laboratory to back up precious, non-commercial cell lines and store cultures not in active use in experiments underway. To make the technology more widely available, cryopreservation research is making major advances to overcome the challenges inherent in freezing cells, tissues and organs for long-term sub-zero storage.

“Cryopreserving biosamples is a complex process for several reasons,” explained Jonathan Lakey, professor emeritus at the Surgery School of Medicine and the Henry Samueli School of Engineering at UC Irvine. “Freezing induces cryoinjury to cells, damage caused by the growth of intracellular ice crystals, which mechanically destroy cellular structures. Additionally, freezing causes changes to local cellular salt gradients, possibly triggering osmotic shock. These damaged, cryoinjured cells are less likely to survive upon thawing, defeating the purpose of cryopreservation,” elaborated Lakey. “Of course, cryoinjury can be abated by adding to the freezing medium a cryoprotectant, a substance that protects cells during the freezing process. Additionally, samples need to be cooled at an optimal rate and there are also cell-specific considerations, which must be determined empirically to devise the best approach for the specific cell or tissue type. For instance, pancreatic islets and oocytes fare better with rapid cooling, whereas hepatocytes and hematopoietic stem cells require relatively slow cooling.”

It is these cell-specific considerations that render cryopreservation challenging for any assembly more complex than single-cell samples. “There are two key reasons why cryopreserving tissues and organs is difficult,” explained Saffron Bryant, research fellow at the STEM School of Science at RMIT, Australia. “First, tissues and organs are made up of several cell types of variable size, which absorb cryoprotectants and freeze at distinct rates. These distinct mass and heat transfer dynamics necessitate different cryopreservation protocols for cells within the same organ. Second, although an essential component of the cooling medium, the cryoprotectant, which must permeate the cells to help them survive freezing, is also usually toxic to cells. To freeze an organ, all layers in multi-layered tissues and organs need to be exposed to the cryoprotectant; however, placing an organ directly into a vat of cryoprotectant, such as dimethyl sulfoxide [DMSO], the current standard, exposes the outer layers immediately, which start to die from toxicity before the cryoprotectant can permeate to the core of the organ.” 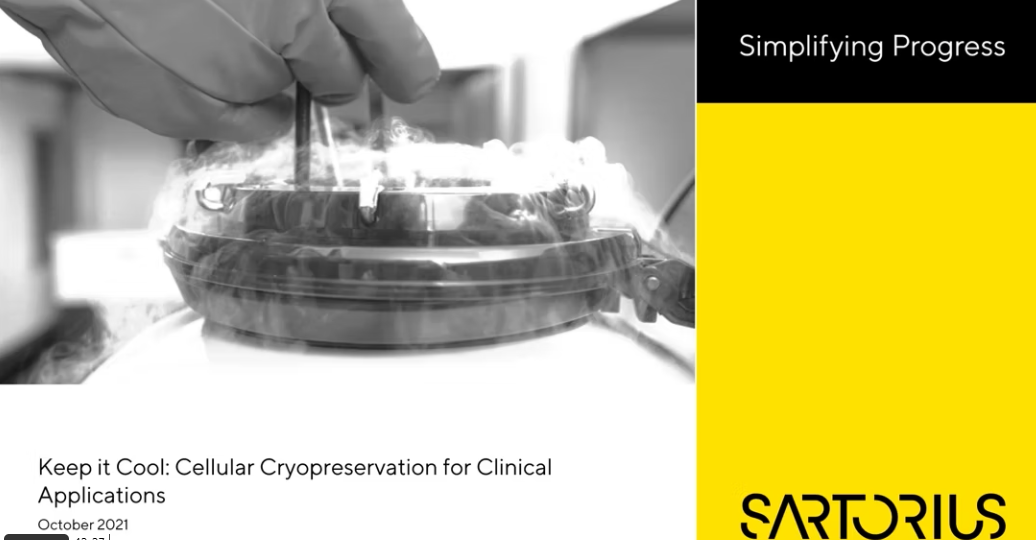 Did you know that the the freeze-thaw process can present challenges including low survival rate, altered gene expression and morphology, and loss of cellular function?Watch this webinar to explore how to overcome challenges in cryopreservation, choose the correct media and optimize cryopreservation to facilitate translation to cellular therapy applications.

Two is better than one

Much research has focused on developing less toxic or, preferably, nontoxic cryoprotectants to improve the success of cryopreservation. Lakey and his team investigated combining DMSO with ethylene glycol to cryoprotect pancreatic islet beta-cells, which can potentially treat patients with type 1 diabetes. “The process for transplanting beta-cells remains suboptimal, although the Edmonton protocol achieves relatively better graft survival than earlier methods. Transplant recipients receive an immune suppressive regimen to prevent graft rejection, but these immunosuppressive drugs are toxic to the transplanted beta-cells, which are in a fragile state after thawing. However, if a better cryopreservation method can be developed, which renders beta-cells more viable upon thawing, this might improve their chances of survival following transplant and the immune suppressive regimens,” explained Lakey of the potential medical procedure.

The normal concentration of DMSO for freezing cells is added stepwise up to 2 M. But by combining 1 M DMSO with 0.5 M ethylene glycol, Lakey and his team were able to drop the total concentration of cryoprotectant needed, lowering the overall toxicity of this cryoprotectant mixture. Next, they froze pancreatic beta-cells in the DMSO-ethylene glycol cryoprotectant mixture and in 2 M DMSO, reanimated the cells, and transplanted them into diabetic mice lacking beta-cells. If the transplanted beta-cells are viable, they start to produce insulin, a glucose regulating molecule, which returns the diabetic mice to a state of normoglycemia, meaning normal blood sugar levels. “The results were very encouraging,” Lakey recalled of this work. “We found diabetic mice that received beta-cells frozen in the DMSO-ethylene glycol mixture were able to return to normoglycemia 12 days sooner than mice that received the same number of beta-cells frozen in DMSO only. These findings indicate that the beta-cells were more viable upon thawing when they had been cryoprotected in the DMSO-ethylene glycol mixture than in DMSO alone. Continuing to improve cryopreservation raises the prospect of long-term beta-cell banking.”

With such a low toxicity, the deep eutectic solvent could have potential applications for freezing organs prior to transplants. Unfortunately, at present, a significant number of consented organs from deceased individuals are not used for transplants. The availability of a nontoxic cryoprotectant could help address this issue by freezing organs until they are needed for transplant, preventing wastage of donated samples. “Theoretically, incubating an organ in our deep eutectic solvent would not kill the outer layers of cells. Thus, you could wait for it to penetrate into the deeper layers, which would improve the success of freezing an organ well-permeated with cryoprotectant. This is a research avenue we are pursuing.” 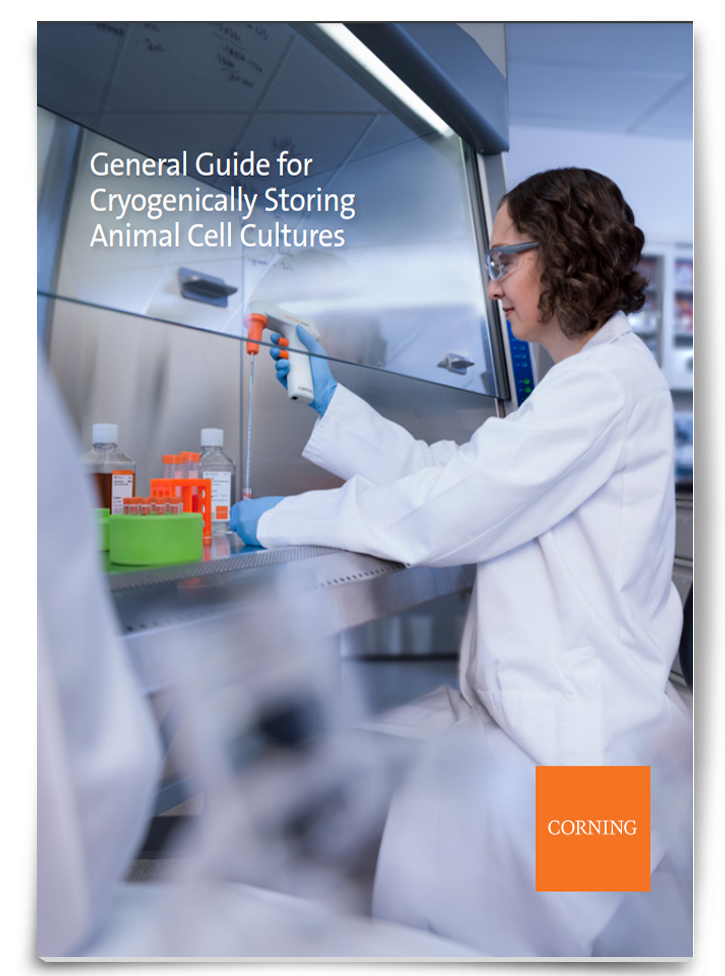 Maintaining the health of growing cell cultures is a demanding task made more difficult by the perpetual risk of loss through accidents or contamination. Download this guide to learn more about the advantages of freezing cell cultures, general events during cell freezing and the practical aspects of cell freezing.

Another approach Lakey and his team have tested to improve cryopreservation is to encapsulate beta-cells in a layer of alginate, a water-absorbing gelling polymer isolated from brown seaweed. “The rationale behind this project was that the alginate biomaterial would serve as a protective coat around the islet-beta cells, altering the dynamics of cryoprotectant permeation and minimizing toxicity and exposure. The alginate membrane can also protect cells by providing another layer of material to hold them together,” elaborated Lakey. Indeed, encapsulation enhanced beta-cell survival and function after thawing. When transplanted, beta-cells that had been encapsulated in alginate before they were cryopreserved returned diabetic mice to a normoglycemic state almost two weeks faster than beta-cells that had not been encapsulated prior to freezing. “This definitely appears to be a promising approach that could improve the cryopreservation protocol for islets,” concluded Lakey.

When asked about future directions, Lakey replied that customized protocols for specific cell types are needed. “I’ve worked a great deal in my career with beta-cells, which have potential medical applications for patients with type 1 diabetes. However, there are various other cell types, such as stem cells, immune cells, that may be useful as therapies for certain medical conditions. Each cell type has different permeation kinetics and thus will need a tailored cytoprotectant. By lowering cytoprotectant toxicity, we may even achieve the freezing of tissues and organs.”

Bryant echoed this sentiment and also thinks that less toxic cytoprotectants and customized freezing protocols may make organ freezing a reality one day. “There are two key aspects that I think will advance this field,” she said. “New cryoprotectants that are less toxic and thus work for a broader number of cell types. And, also, new technologies for more uniform cooling and heating. For example, microwave and magnetic technology are being investigated by other groups to facilitate better freezing and thawing of larger samples, which is very promising.” Bryant herself is also testing protic ionic liquids, which, like deep eutectic solvents, are glass formers. “By tailoring the specific properties of these solvents, we can optimize them for cryopreserving various types of cells, and, hopefully one day, organs.”

Complete the form below to unlock access to this Audio Article: "New Frontiers in Freezing: Cryopreservation Advances"