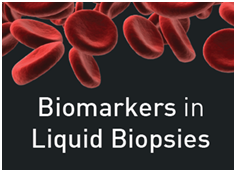 MicroRNAs are powerful non-invasive biomarkers. Exiqon are experts in liquid biopsies – we have developed NGS and qPCR products and services specifically optimized for biofluids e.g. serum/plasma, urine, CSF. Our specialist expertise is the product of extensive research, our in-house biomarker discovery programs and pioneering work analyzing thousands of biofluid samples.

Rapid, accurate, timely, and inexpensive diagnostic testing has always been a goal of medicine. Advances in molecular biology, coupled with the miniaturization and improved sensitivity of assays and devices in general, have enabled a new wave of point-of-care (POC) or “bedside” diagnostics.

Some developers distinguish POC from point-of-need testing but most use the terms interchangeably. The U.S. Food and Drug Administration fails to differentiate between the two in its 2015 National Action Plan for Combating Antibiotic-Resistant Bacteria.

The College of American Pathologists defines a POC test as one “that is performed near or at the site of a patient with the result leading to a possible change in care.”

According to Kim Futrell, Product Marketing Manager with Orchard Software (Wilmington, North Carolina, USA), the objective of POC testing is “to bring testing closer to the patient and results conveniently and quickly to the provider to expedite diagnosis and subsequent treatment.”

A study by Research and Markets (Dublin, Ireland) predicts that POC diagnostics are poised to grow at an annual rate of around 8.5% over the next decade, reaching approximately $48.2 billion (US) by 2025.

POC tests and devices exist for the gamut of medical conditions, from infectious diseases to pregnancy to cancer. Physicians and patients use POC testing for screening, confirmatory diagnosis, and disease/therapy management. Enthusiasm on the parts of caregivers, patients, and health systems vary widely, and in countries lacking universal healthcare competing financial interests also come into play. Unsurprisingly, complex regulations have arisen governing POC diagnostics and their proper use. 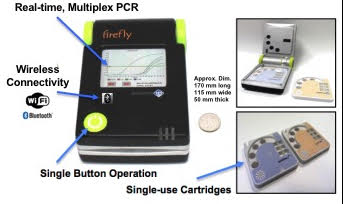 Kimothy L. Smith, DVM Ph.D., Chief Technology Advisor at PositiveID, believes that the combination of portability, PCR robustness, and short analysis time could change tests administered in physician offices. “It could take clinical diagnostics of common illnesses out of hospitals and large centralized laboratories.” This is currently possible with antibody-based testing, but PCR easily discriminates between common and pandemic influenza, for example, which could affect treatment and quarantine decisions.

One intriguing application of POC PCR is to veterinary medicine, where it detects avian and porcine influenza strains with the potential to jump to humans.

As genetics uncovers more disease connections, expect novel POC testing formats to incorporate some aspect of gene analysis. Nanostring’s nCounter Analysis System employs digital barcode technology and single-molecule imaging for direct multiplexed measurement of gene expression. The company claims precision and sensitivity of less than one copy per cell (more on that in a minute).

Each color-coded barcode binds to one target-specific probe corresponding to a gene of interest. Together with controls, the probes form a multiplexed CodeSet which identifies hundreds of genes in one operation. The fully automated nCounter, does not require enzymatic amplification, yet can analyze up to 800 genes from DNA samples as small as 300 ng, and RNA down to 50-100 ng.

Each barcode represents a single target molecule. Barcodes hybridize directly to targets and are counted individually without amplification.

The barcode detection strategy uses two base pair probes, of about 50 bases, per mRNA that hybridize in solution. The reporter probe carries the signal, while the capture probe immobilizes the analyte-reagent complex for data collection.

Post-hybridization, excess probe is washed away and the probe/target complexes aligned and immobilized in the nCounter cartridge. Color codes on the cartridge surface are counted for each target molecule. 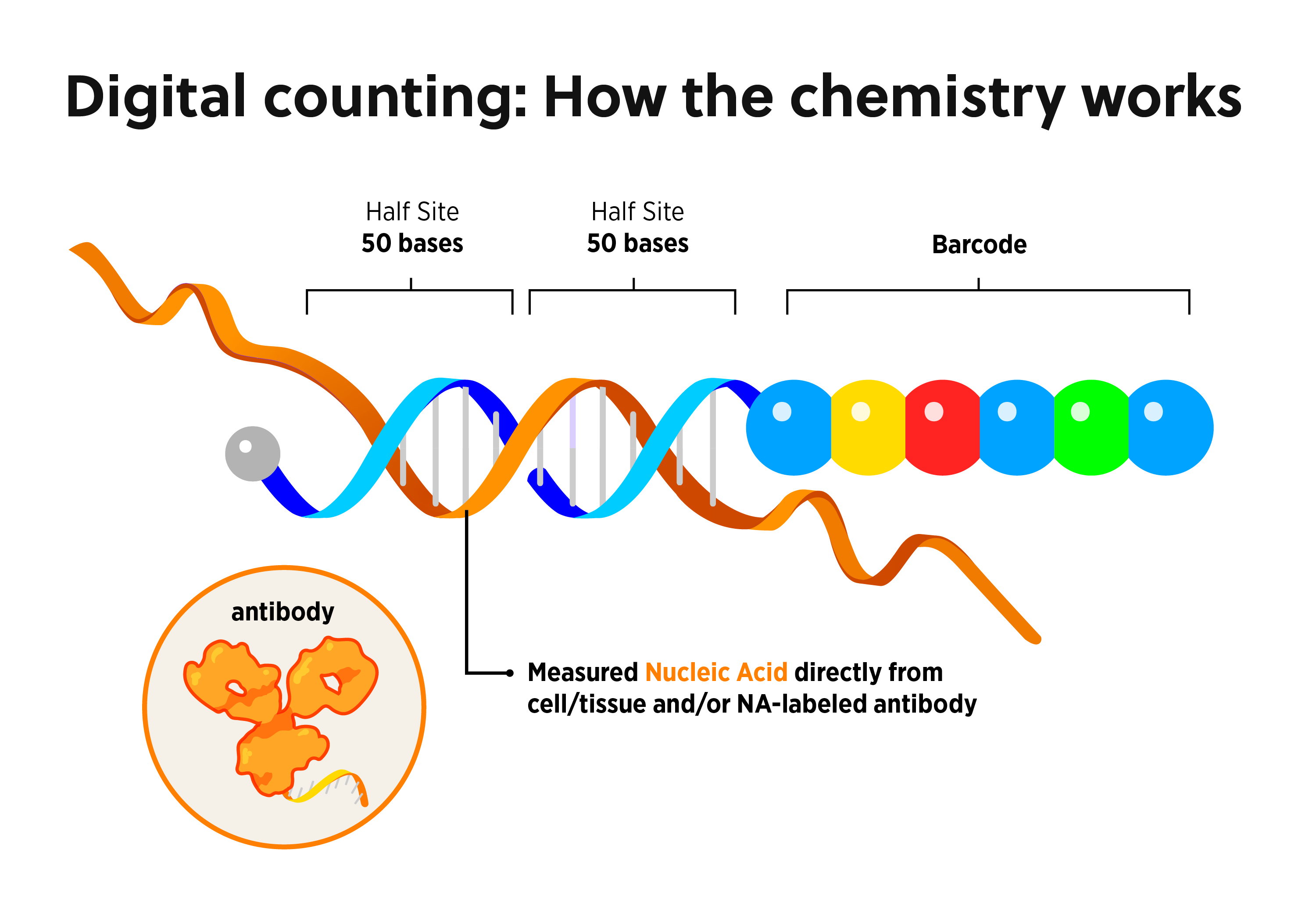 Barcode-based diagnostics provide an actionable answer in about a day and a half.

While nCounter is not quite at the POC stage, that capability will come soon. Beechem claims that within two product generations nurses will be carrying a portable barcode-based instrument from bedside to bedside. “We already have instruments in development that implement that idea.”

OPKO Diagnostics (Miami, Florida, USA) is one of the rare companies with interest in both therapeutics and POC diagnostics. Its Claros® 1 in-office immunoassay platform consists of a small table-top reader and single-use microfluidic cassettes that provide levels of testosterone and prostate-specific antigen in ten minutes from one drop of blood. Claros is suitable for physician offices and is adaptable to POC testing of infectious disease, Vitamin D, hormones, and cardiac markers.

In a typical ELISA immunoassay an immobilized antibody binds to the diagnostic target, usually a protein. A second antibody linked to an enzyme is then added, forming an analyte “sandwich.” Adding an enzyme substrate to the labeled antibody-enzyme complex releases light.

The Claros instrument uses a secondary antibody complexed to gold nanoparticles. The signal arises from the gold-catalyzed reduction of silver, resulting in the development of a dark coloration in the microfluidic zone where the first antibody is immobilized. Analyte concentrations are related to the quantity of light absorbance.

According to company President David Okrongly, Ph.D., Claros provides results as accurately and sensitively as standard immunoassays. “It was originally designed and built for ruggedness and simplicity, and has been field-tested in Rwanda for HIV and syphilis.” Claros was also evaluated in the U.K. for PSA.

In the United States medical need and potential cost savings are the incentives through which the U.S. Food and Drug Administration (FDA), diagnostics developers, and medical practices work out the suitability and marketability of professionally administered bedside tests. Similar dynamics exist in European and Asian jurisdictions.

The FDA acknowledges the public benefit of OTC diagnostics, particularly for common infectious diseases. In the Executive Summary prepared for an August 16, 2016 meeting of the Agency’s Microbiology Devices Panel, the agency notes that “readiness and interest by manufacturers to develop these tests is well reflected by the number of pre-submissions to FDA requesting feedback on analytical and clinical study designs for possible OTC submissions.”

But the agency also cautions on the risks to patients of false positives or false negatives “due to the relative inexperience of the untrained users, particularly when interpreting visually-read lateral flow assays.”

Risks include under-treatment for individuals at risk of secondary complications, and the unnecessary administration of antiviral drugs for false positives. “Flu-like symptoms” are quite common in diseases – some life-threatening – that have nothing to do with flu.

Risks of user error and inappropriate testing may be lessened by simpler, more user-friendly operation. However, even when OTC tests work perfectly public health officials lose the potential for disease surveillance.

With their somewhat restricted medical mission POC tests targeted to consumers must account more broadly for patient needs, medical necessity, the connection between diagnostics  and treatment, and the implications of erroneous results. Devices that provide definitive diagnostics are approved in the United States as Class 3 medical devices, which undergo a stringent approval process. European and UK regulators maintain a comparable designation. Within the three jurisdictions developers must obtain a CE Mark for non-consumer diagnostic tests.

Todorovic has published a five-point guide to POC technology:

* Interests in POC tests will grow outside of traditional care settings, into homes and care facilities. The outliers are oncology, which will remain mostly within the realm of physician care, and ophthalmology, where tests for monitoring disease progression are gaining popularity.

* Traditional care settings will see the greatest near-term growth. Here the availability of actionable tests and the shift in economics from central labs to points of care will be significant drivers.

* Consumer markets will take time to develop. Within a decade, however, technologies that have been validated in care settings will begin to trickle down into home-testing markets.

* The success of POC products will depend on economics

As technology improves so will the line between treatment and diagnosis blur. Todorovic mentions a COPD inhaler add-on from Propeller Health (Madison, Wisconsin USA) which is tied into a patient’s smart phone or computer. The inhaler correlates environmental conditions to inhaler use, thereby warning patients of potential triggers that exacerbate their condition. Call it a “prognostic” diagnostic if you will.

Todorovic is less sanguine about genuine POC diagnostics entering consumer markets. Pharmacy-based influenza and pregnancy tests being the principal exceptions. HIV testing is also available through home-based sample collection but the actual assay occurs at a central lab, not at the point of use. “Regulations need to change for this marketplace to be affected significantly by POC tests,” he says.

Even within the current economic model, consumer POC tests can still cut costs associated with unnecessary doctor visits. POC tests could eliminate one or more of these steps in the cycle of visit, off-site test, and revisit. “They can cut out a good deal of the uncertainty, anxiety, and waiting,” Todorovic says.

In the complex world of healthcare finance, the question of who pays for a service looms large. In the U.S. private insurance model, physician office tests divert healthcare dollars from large central testing laboratories to doctors. Healthcare plans, physicians, and patients stand to benefit while the labs will lose. Patients will benefit from more convenient testing, shorter waits for results, and fewer trips back to the doctor or to off-site blood collection facilities. The interplay of patient convenience and shifting reimbursement dollars will be interesting to watch as various forces reach equilibrium.

Not all scenarios are equally rosy. Doctors may lack the resources to assume additional testing duties. In that situation, Todorovic says, smaller offices may combine resources to form mini-labs within similar or related medical specialties. “There are many business models, and proponents and opponents on every side.”

Economic incentives within the U.K.’s government-based model are somewhat less apparent. Physicians will not benefit financially, but POC testing will reduce costs to the NHS through timeliness, fewer patient interactions, and lower testing costs. Dr. Okrongly suggests that even patients accustomed to “free” healthcare might pay modestly for the added convenience.