In Europe and Northern America life expectancy has increased on average, from 65 in the 1950s to 79 years in the 2020s.1 The United Nations also predicted that by the 2100s, people will, on average, live until their late 80s. It is not surprising that alongside an increasingly older population, aging-associated diseases, such as cancer and neurodegenerative conditions, are also becoming more prevalent, decreasing quality of life, and requiring chronic and expensive medical interventions that can often be accompanied by debilitating side effects.2 Targeted and more precise drugs need to be developed to reform current treatment modalities for such chronic diseases and satisfy unmet medical needs — and as such, novel drug targets need to be identified.

The foundational pillars of drug discovery

Interrogating the human genome and proteome to identify disease culprits through computational and bioinformatic studies can be the first step in precise novel drug target discovery. Exploring the connection between genetic loci and complex diseases, researchers used genome-wide association studies to uncover a link between disease-associated biomarkers and thousands of new potential druggable human proteins.3 After identification of a potential target implicated in disease development, target validation is essential to establish the safety and potency of a novel therapeutic modality. The combinatorial use of translational research tools in an ecosystem of different environmental and biological conditions can help identify novel protein targets, uncover their role in disease progression and unravel complex biological systems. Quantitative and qualitative mRNA detection through quantitative PCR (qPCR; also called real-time PCR) amplification is a fundamental research tool used to answer a gamut of scientific questions and is commonly used to detect gene expression changes in response to environmental triggers. Changes at the transcription level can lead to the identification of a gene of interest. However, altered gene expression does not necessarily coincide with protein level changes. Proteome analysis using western blotting can bridge the knowledge gap between mRNA expression and protein identification, quantification and detection of any post-translational modifications that might contribute to the disease endotype. Diseases, however, are often the product of complex engine failure rather than a single mechanism. Multiplex immunological assays can help decipher the link between multiple proteins in a single experiment, thus expanding our understanding of complex biological systems.

Cases of aging-associated neurodegeneration with Alzheimer’s disease (AD)-like dementia have been rising in individuals with Down Syndrome (DS) and were found to be associated with altered insulin signaling in the brain.4  In recent work, published in Alzheimer’s & Dementia, a western blotting-multiplex analysis workflow was used to explore how altered insulin signaling in the brain may increase the risk of neurodegeneration by affecting synaptic plasticity.5,6 The link between the mammalian target of rapamycin (mTOR) and insulin signaling in the brain was also investigated. Previous studies have shown that both pathways are altered in younger individuals with DS, suggesting they may contribute to neurodegeneration and aging-associated mental capability decline later in life.6 Hence, the study aimed to unravel the complex relationship between these two pathways and potentially identify novel druggable targets that may be exploited to perform earlier diagnosis, treat symptomatic disease, or even help to reduce the onset of neurodegeneration in individuals with DS. 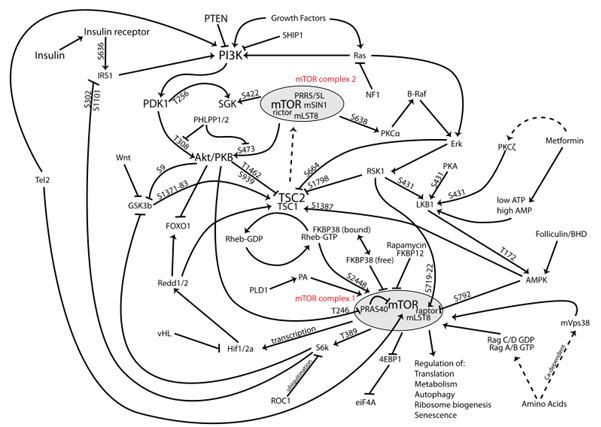 Figure 1: The mTOR signaling pathway. The mTOR “master regulator” is involved in insulin signaling among a plethora of other anabolic and catabolic cellular processes. Credit: Charles Betz. This image is licensed under the Creative Commons Attribution 3.0 Unported license.

In the study, plasma samples from both children with DS and healthy donors were collected and analyzed via western blotting, revealing neuronal biomarkers involved with aberrant insulin/mTOR pathway expression, characteristic of AD-like pathogenesis in young people with DS. This was achieved primarily by isolating transmembrane and intravesicular extracellular vesicle (EV) markers from plasma samples and using immunoprecipitation to purify plasma-resident neuronal-derived extracellular vesicles (nEVs). High-throughput multiplex immunoassaying profiling was then used to unravel the complex relationship between all isolated biomarkers from purified nEVs participating in the insulin/mTOR pathway. Specifically, a targeted multiplex immunoassay was used to quantify the levels of eight phosphokinases and total number of mediator proteins in nEVs found to be involved in the mTOR pathway. Identification and isolation of purified nEVs through western blotting, and further interrogation of the crosstalk between purified biomarkers and kinases involved in fundamental signaling pathways showed a significant alteration of the insulin/mTOR pathway in young people with DS. This work demonstrated a minimally invasive approach using plasma-derived nEVs as novel exosomal disease-associated biomarkers to assess the neuronal insulin/mTOR pathway in a poorly represented group of people, and has, for the first time, uncovered the therapeutic potential of these proteins.

Assessing the role of microglia in neuroinflammation

Neuroimmunology researcher, Andrea Crotti, PhD, demonstrated the extended capabilities of fundamental translational tools in identifying potential novel drug targets during his work investigating microglial involvement in AD progression. Microglia are located throughout the central nervous system (CNS) and are vital in a multitude of processes associated with brain development and maintenance. They are also the primary immune defense mechanism against malfunctioning neurons, synapses and CNS-invading pathogens. Evidence showed that changes in microglial function are associated with extensive neurodegeneration, brain aging and inflammation.7 To understand how microglial alterations contribute to neuroinflammation and AD progression, Dr. Crotti used qPCR to profile microglial gene expression throughout disease progression and monitored changes in response to different drugs. To assess drug-induced inflammatory responses, cytokine levels in the supernatant were measured using ELISAs. Genes of interest displaying altered expression were then interrogated at the protein level via western blotting. Assessing the microglial expression profile and inflammation in response to different drugs at different AD stages could help unravel the behavior of microglia and, eventually, identify distinct pathways that may contribute to neuroinflammation and could be employed as novel drug targets in the future.