The Future for PCR Diagnostics

The Nobel Prize winning polymerase chain reaction (PCR)1 technique revolutionized molecular biology on its invention in 1986 and it has done the same for medical diagnostics over the last 15 years. Being able to copy and multiply specific target DNA molecules has opened the door to diagnosing diseases across multiple areas quickly, accurately, and as time progresses at lower cost.

PCR creates unlimited DNA copies from just one original strand using polymerase enzymes, primers (small DNA sequences that determine the DNA to be amplified) and multiple thermal cycles. Advances came in the 1980s with the use of bacterial enzymes that could withstand high temperatures and in 1991 the technology was acquired by pharma giant Roche, who began to refine the science for use in medical diagnostics.

‘Current [culture] methods can be quite laborious and can take days to weeks sometimes, whereas quantitative PCR methods can give you answers in hours. It can be much quicker and more robust,’ says Rebecca Sanders, nucleic acid metrology scientist from LGC, Teddington, UK. PCR diagnostics are faster and less prone to cross-contamination because the technique is generally conducted in automated thermal cyclers. It is also more sensitive and more specific than plate-based immunoassays.

In some cases, PCR is becoming the preferred method of diagnosis. For example, the method has been endorsed by the World Health Organization (WHO) for rapid diagnosis of pulmonary tuberculosis (TB)2 to replace the standard sputum smear microscopy method developed over a century ago. PCR or nucleic acid amplification tests (NAATs) give rapid results and this is allowing field-use for early TB diagnosis - important for preventing the disease spreading. 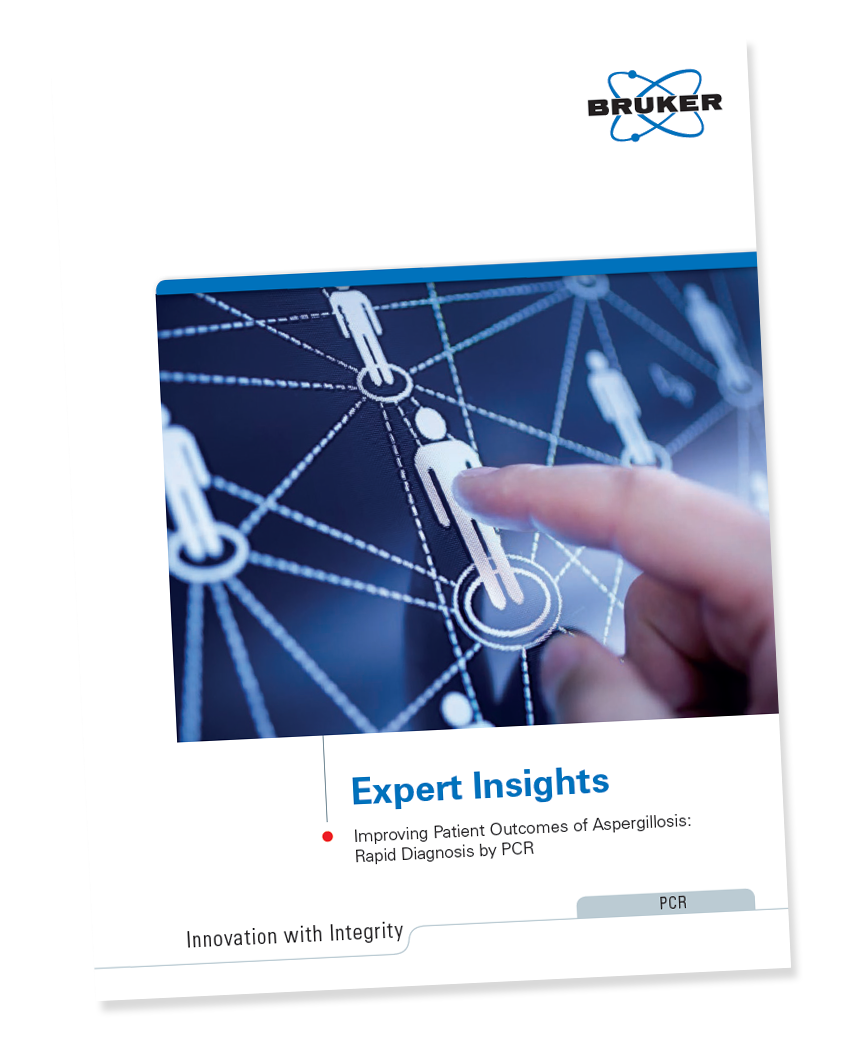 Dr Lewis White and Prof Rosemary Barnes describe how adopting Aspergillus PCR into clinical practice, as part of a screening strategy for invasive aspergillosis, has led to earlier diagnosis, improved  patient outcomes and reduced use of empiric antifungal therapy.

The potential for PCR diagnostics is huge. ‘It would be easier to define where PCR won’t be used - everything in this planet has a DNA or RNA genome so if you want to detect anything you go to PCR,’ explains Jonathan O’Halloran, Chief Scientific Officer of QuantumDx, a PCR diagnostics start-up based in Newcastle, UK. He adds that as well as clinical applications, PCR diagnostics are also likely to become important in industries such as food and agriculture. Another advantage of PCR diagnostics is their use in multiplex assays - the amplification of multiple targets in a single PCR experiment by simply using multiple primer pairs. This can be useful in diagnosing infectious agents where symptoms are not easily characterized. Up to 20 pathogens can be covered in one test.3

Aron Cohen, Chief Executive Officer of London-based diagnostics.ai, says that the current PCR diagnostics ecosystem is currently dominated by lab-based testing, ‘at the moment there are very few tests that are FDA approved, maybe 10 different assays have FDA approval (such as for HIV) and have full automation, but for the vast majority, people are reliant of laboratory-developed tests.’

The majority of diagnostics will be based on real-time or quantitative PCR (qPCR).4 It works by using fluorescently-labeled oligonucleotide probes and monitoring the fluorescence after each cycle - the intensity of the signal reflects the amount of DNA amplified and the number of cycles at which the fluorescence is first detected is used to calculate the initial number of DNA molecules in the sample, once the system has been calibrated.

qPCR has also been adapted to detect RNA viruses such as HIV and hepatitis C and the analysis of RNA transcripts associated with some cancers. In the two-step reverse transcription polymerase chain reaction (RT-PCR), RNA molecules are converted into their complementary DNA (cDNA) sequences by reverse transcriptase enzymes followed by amplification of the cDNA by standard PCR. A new ultra-rapid method in development could promise a more efficient process, particularly in analyzing large numbers of samples. The method utilizes a genetically engineered thermostable reverse-transcriptase so the PCR process can proceed directly from RNA.5

But there are also limitations associated with PCR diagnostics, ‘its all about your sample preparation with PCR, unlike immuno-diagnostics where you can essentially use a raw serum blood sample, PCR diagnostics requires you to do some challenging sample preparation,’ says O’Halloran. Many organic and inorganic substances will inhibit PCR so they must be removed and these extra stages make the procedure more complicated.

A number of companies and academic groups are looking at technology to improve PCR diagnostics. An alternative temperature cycling method is being developed by Luke Lee, Professor of Bioengineering at the University of California, Berkeley.  He has devised a way of cycling the temperature faster – using plasmonics – the interaction of light with metal surface electrons which generates heat. LEDs heat a 120nm gold film in contact with a DNA solution in a microfluidic well. The mechanism allowed cycling from 55°C to 95°C, 30 times in 5 minutes.

O’Halloran’s QuantumDx has launched a portable bench-top device which can reduce a test to as little as 7 minutes and has improved sensitivity of under 1 cell per ml – a huge improvement on standard methods which are around 150 cells per ml. This has been achieved using clever microfluidics and nanowire field effect transistor technology.7  ‘We are addressing some of the sensitivity issues by using some really novel physics called dielectrophoresis,’ explains O’Halloran. This phenomenon causes a force to be exerted on a particle in a non-uniform electric field and allows the precise cells of interest to be captured from the raw sample: ‘We set up electric fields at a frequency and magnitude that causes dipole moments specifically in the cell of interest and we use the microfluids to release those concentrated cells into our PCR.’

In large diagnostics laboratories, most PCR is being carried out by automated, robotic, high-throughput systems. But the standardization and quality control for PCR still requires laborious human input. Innovative start-up, diagnostics.ai has come up with a solution, using artificial intelligence. ‘We effectively feed the learning machine a supervised dataset, a set of input data with a bunch of known results and the learning machine automatically checks itself and ensures it can give the same results routinely – something that can’t be done without manual input in current systems because of the variability of real-time PCR across different platforms and assays,’ says Cohen. Once their system has been set up, results can be reported almost immediately, and it will only flag-up unexpected results that require further analysis. The system is being trialed by the UK’s largest provider of pathology services, Viapath in one of their flagship laboratories.

Invented in the early 1990’s, but superceded by qPCR in 1996, digital PCR has now made a comeback for specialist applications. The technique does not require standard calibration but works by partitioning the initial sample into a large number of individual wells prior to amplification so that each well will either have 1 or 0 DNA molecules (hence the digital). Following amplification, a simple calculation of the positive or negative wells can determine an absolute quantification.8

‘Digital allows a level of precision that you just can’t achieve with qPCR,’ says Sanders, but O’Halloran notes, ‘it is frankly overkill for most clinical applications’. Where it is useful is when you need to know exactly how much of a target is in your sample. ‘There are some cancers for example that are caused by multiple copies of the same gene, so copy number variation and knowing the number of copies can change the treatment regime,’ explains Sanders. She says currently most hospitals do not have access to this kind of instrumentation; ‘the cost needs to come down and that will happen if there are more platforms on the market.’

Looking to the future

PCR diagnosis is also set to have a big impact on the future growth of precision medicine – the customization of healthcare to the individual patient. O’Halloran says QuantumDx have already developed a warfarin test. The anti-coagulant drug of choice for decades, it has recently been swapped for expensive alternatives due to the risk of thrombosis and other complications in a subset of patients. ‘The increase in [anti-coagulant] spend is hundreds of thousands of pounds every year,’ says O’Halloran, but, ‘we have developed a test that allows us to do a quick test on patients and then tell the doctor who can take warfarin, (which is 75% of our population).’

Ultimately O’Halloran sees PCR diagnostics as something that will expand into primary care: ‘you are going to see it in the doctor’s office and the pharmacy, it’s going to be a really exciting time for PCR.’ QuantumDx is working on a hand-held PCR device and he suggests one day it might sit in our home medicine cabinet next to the thermometer, ‘I can’t see any reason why that can’t happen within the next 10 years.’

END_OF_DOCUMENT_TOKEN_TO_BE_REPLACED

What Led to Reagent Shortages for Coronavirus Testing in the US?

Testing the right person is a crucial aspect in any pandemic. Apart from saving lives, widespread testing can provide important data required to model the course of the outbreak. Reagents are a critical component of testing. Unfortunately, many US labs have struggled to procure the reagents needed to perform large batches of coronavirus diagnostic testing.

END_OF_DOCUMENT_TOKEN_TO_BE_REPLACED

Discover the True Complexities of Cancer

END_OF_DOCUMENT_TOKEN_TO_BE_REPLACED

How Important Is Speech in Transmitting Coronavirus?

END_OF_DOCUMENT_TOKEN_TO_BE_REPLACED

Fighting COVID-19 With the Help of High-performance Computing