A Landscape Assessment of Newborn Screening in Europe

A Landscape Assessment of Newborn Screening in Europe

Newborn screening (NBS), or the process of identifying members of a population who may have, or may be at risk of developing, a specific disease or condition, has become an integral part of many public health programs in recent years.1 NBS programs have helped minimize patient suffering, which often results from extended diagnostic pathways, and have also played a role in diminishing the longer-term disease burden on healthcare systems by offering the prospect of early diagnosis and treatment. The benefits of NBS are well established but there are disparities across Europe in the number of diseases included in the panel of tests conducted on newborns – ranging from more than 25 diseases in some countries to as few as 2 in others. As the treatment landscape for rare diseases and gene therapies evolves and more therapies become available, the role of NBS as a critical driver of value and efficiency for European healthcare systems is poised to increase.

To better understand the differences in the composition and functioning of NBS programs across Europe, our team at CRA conducted a comparative analysis of specific policies governing periodic updates to NBS panels and explored the role of stakeholders involved in this process in 30 European countries. Our findings showed the need for policy changes to make NBS programs more patient focused and better fit for purpose and the role that decision making stakeholders should play in optimizing the positive impact of NBS programs on patients and healthcare systems in the future.

Based on our analysis, there are significant disparities between European countries in the number and types of diseases that are included in national NBS programs. Some countries such as Italy, Portugal and Austria screen for more than 25 diseases as part of their national panel,* with Italy leading the way by screening for more than 45 diseases. In contrast, many countries screen for significantly fewer diseases, with the UK and France both testing for less than 10 diseases in their national panels, while Romania and Cyprus are only testing for 2.

There are also disparities in the frequency that each disease is included across NBS programs, with phenylketonuria (PKU) and congenital hypothyroidism (CHT) universally screened for across all 30 countries in-scope. These diseases have a relatively high incidence compared to other screened diseases (both have incidences of greater than 1 in 10,000 whereas other diseases included in programs can have incidence rates as low as 1 in 250,000).2 However, there are other diseases that have similarly high incidence rates, such as spinal muscular atrophy (SMA) and sickle cell disease (SCD), that are nationally screened for in less than 30% of European countries.

Comparisons of the key characteristics of NBS programs across countries also provide some insights into differences in access to NBS, including factors such as:

Program governance – Some NBS programs are run by national governing bodies, whereas others are run at the regional level, creating disparities within even a single country. For example, in Spain, some autonomous regions such as Catalonia test for more than 20 different diseases, whereas the national program tests for less than 10 diseases.

Review process – There are notable differences in the evaluation criteria and process by which countries update their NBS programs, with some, such as the UK, conducting reviews annually and others, such as Germany, on an ad hoc basis.

Time to implementation – There are significant disparities in the time it takes to implement changes to NBS programs including approval of inclusion of new diseases across countries. Some countries (e.g., Denmark, Belgium, UK) take less than one year and others (e.g., Greece, Romania, Portugal) take three or more years to put decisions into effect.

Many countries have set goals to improve NBS, with government objectives typically published in rare disease plans or national policies. National policies often act as a driver to include more diseases in NBS panels in some countries while in others policymakers have indicated their intent for program and national policy improvements, but still there have been limited or no national panel expansions. Government mandates to improve NBS programs are important, but there are other key factors that often drive NBS panel expansion:

The involvement of relevant decision-making stakeholders (e.g., HTA bodies or screening committees) in proposals for disease inclusion in NBS panels. Factors that impact this include: the involvement of non-decision-making stakeholders (e.g., patient advocacy groups) in increasing awareness and knowledge of a disease; the transparency, consistency and ease of proposal submission processes; and relevant resources and funding to support consideration of screening for additional diseases.

The review and approval of additions or withdrawals of diseases from NBS panels. This involves ensuring that the evaluation criteria for inclusion or exclusion are appropriate, clear and transparent, that timelines for review are carried out efficiently, and that external stakeholders are involved in evaluation processes so that they can provide specialist expertise or important patient perspectives.

The implementation process and the adherence to any timelines will depend on several factors including having the required infrastructure, procurement policies, funding and clinical expertise to carry out testing. Political willingness to support implementation timelines is also critical, as highlighted by policy in the UK, which mandates implementation in England and Wales within one year of approval. 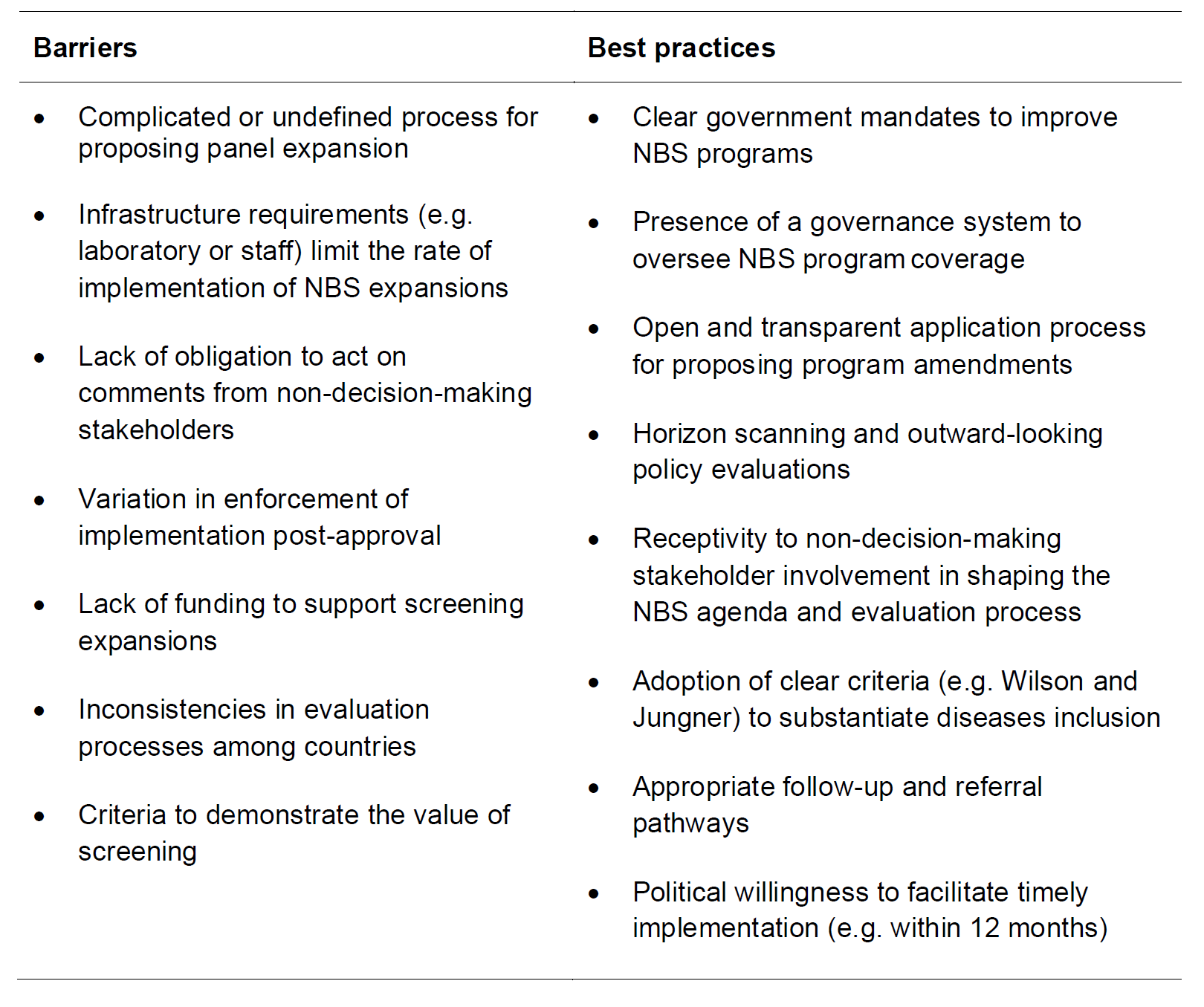 Based on the identification of barriers and best practices, we have developed a set of recommendations for policymakers and other key stakeholders with influence on the NBS policy environment to implement to address any challenges and support future NBS panel expansion:

While there have been developments in NBS programs across Europe in recent years, the increasing availability of genetic testing and advanced screening techniques, coupled with new highly effective treatments, should prompt countries to expand their programs further. More efficient and accelerated processes for NBS panel expansion will help align the advancement of these programs with the speed of medical innovation, maximizing the benefit delivered to patients and healthcare systems.

The views expressed herein are the authors’ and not those of Charles River Associates (CRA) or any of the organizations with which the authors are affiliated.

* Within the context of NBS, “panel” is a term used to describe the selection of diseases/disorders that are currently tested for as part of a NBS program.

GA I = Glutaric acidemia type I

MPS I = Type I mucopolysaccharidosis

MTHFR = Homocystinuria due to MTHFR deficiency

TFP = Deficit of the trifunctional protein

TYR I = Type I tyrosinemia