Type 1 Diabetes Mellitus (T1DM) is an autoimmune disease that occurs due to destruction of the islets of Langerhans in the pancreas. These islets contain β cells and when destroyed, it reduces the body’s ability to produce insulin leading to hyperglycemia.1 Insulin is a hormone that helps regulate the production of glucose in the bloodstream.2 The body’s diminished ability to produce insulin causes an increase in blood glucose levels which can lead to many adverse health complications.2 Aside from the autoimmune etiology, the causes of T1DM are not fully understood yet. Many theories suggest genetic susceptibility, environmental triggers, or exposure to drugs and chemicals that selectively destroy pancreatic cells.3

The classic trio of symptoms associated with the onset of T1DM include polyuria (excessive urination), polyphagia (excessive hunger), and polydipsia (excessive thirst).1 Along with hyperglycemia, other symptoms include fatigue, nausea, stomach pain, or unintended weight loss.4 It is stated that by the time symptoms manifest, 90-95% of β cells are destroyed and a diagnosis of T1DM is probable.1

T1DM constitutes about 10% of all diabetes cases with an incidence rate of 15 per 100,000 people.5 Although T1DM diagnosis is possible at any age, it is most common in childhood (between the ages of five and seven) and around puberty.1 Furthermore, both genders are impacted by T1DM with a slight predominance in males compared to females.6

The most common complications manifest as hypo- or hyperglycemia, diabetic ketoacidosis (DKA), and psychiatric concerns.7 In the long-term, poorly managed T1DM can lead to cardiovascular disease, retinopathy, neuropathy, and nephropathy.7 Since a T1DM patient is unable to produce insulin, an early and accurate diagnosis is crucial to properly manage the disease, avoid complications, and provide exogenous insulin replacement as a therapeutic option.1

Three different factors may contribute to the destruction of β cells in the pancreas and lead to insulin deficiency: environmental, genetic, and immunologic. Environmental factors that may impact the pathologic progression of T1DM include viruses (i.e., rubella virus) and nutrients from diet (i.e., vitamin D, omega-3 fatty acids, cow’s milk).8 Further investigation is required to determine the correlation of these factors with the increased incidence in T1DM, as this topic is still controversial.

The main genes associated with T1DM are human leukocyte antigen (HLA) DR3, DR3-DQ2, DR4, and DR4-DR8.8 Over 90% of T1DM patients have one or more of these HLA genes compared to 40% of non-T1DM individuals.8 Furthermore, polymorphisms in the promoter region of insulin, known as variable numbers of tandem repeats (VNTRs) account for about 10% of the genetic factor associated with T1DM.8 Insulin-VNTR polymorphisms contribute to the autoimmune destruction of β cells by inhibiting the transcription process of insulin.8 Another genetic association is the cytotoxic T lymphocyte antigen-4 (CTLA-4) gene. Polymorphisms in the CTLA-4 gene lead to a decrease in cellular expression, thus resulting in uninhibited autoimmune balance and immune response.8

The human immune system plays an important role in distinguishing foreign antigens from self. For autoimmune diseases such as T1DM, the destruction of β cells is likely due to apoptosis.8 Some theories suggest that this programmed cell death triggers an inflammatory reaction releasing high levels of proinflammatory cytokines such as tumor necrosis factor α, interferon-γ, and interleukin-1.8 Autoantibodies are also produced as a result of this reactive immune response. These autoantibodies are often present years before the clinical signs and symptoms of T1DM.8

Islet cell autoantibodies (ICA) are known to be associated with T1DM, and several autoantigens have been identified. These autoantigens include the insulinoma-associated protein 2 (IA-2), glutamic acid decarboxylase 65 (GAD65), insulin and the zinc transporter ZnT8.9 Only 2 to 4% of type 1 diabetics are seronegative for autoantibodies, and most have multiple markers.10 This association between antibody prevalence and disease confirms the importance of antibody detection in at risk individuals, prior to clinical onset.

Antibody detection is also useful to distinguish type 1- from type 2 diabetes. For people with T1DM which develops in adulthood onset or with obesity, a type 2 misdiagnosis can arise. Therefore, the detection of one or more ICA can be used for the differentiation in these patients.

Autoantibodies against insulin (IAA) are usually the first to occur in children with risk for T1DM. IAA prevalence correlates inversely with age at onset of diabetes and is 70% in children at the time of diagnosis. In adults, IAA is only relevant if found together with other antibodies since they may not be specific. IAA may also be formed as a result of exogenous insulin so may be found in healthy individuals as well.

The high prevalence of ICA in newly diagnosed patients attests to the importance of early diagnostic testing. The presence of two or more antibodies signifies progression to clinical T1DM.13 Simultaneous detection against GAD65, IA2, ZnT8 and insulin autoantibodies allows for the detection of the onset of T1DM in 98% of cases.14

Diagnosis and staging of T1DM

Symptomatic T1DM is typically confirmed as a result of a patient’s classic symptoms of hyperglycemia, in conjunction with a hemoglobin A1C test ≥ 6.5% or a random plasma glucose ≥ 200 mg/dL (11.1 mmol/L).9 However, there are issues with the A1C test including that the studies which formed the framework for the recommendation of the A1C test for diagnosis of diabetes only included adult populations. It remains unclear if the same A1C cut off point should be used to diagnose diabetes in children. Other factors, such as race/ethnicity and anemia/hemoglobinopathies also contribute to changes in A1C levels and need to be considered when using A1C to diagnose diabetes.9

T1DM can be diagnosed at early pre-symptomatic stages through the identification of autoantibodies.15 The number of detectable ICA correlates with the risk of developing symptomatic T1DM. Additionally, the rate of progression to symptomatic disease is associated with the number of autoantibodies detected, the age of autobody seroconversion as well as the magnitude of antibody titer, antibody affinity and antibody class.15 Due to this strong correlation between antibodies and T1DM, antibody detection represents a useful indicator of disease.

Distinct asymptomatic stages of T1DM with prognostic significance have been identified.15 Stage 1 is defined as the presence of two or more autoantibodies to insulin, IA-2, GAD65, and/or ZnT8. At this stage, while the immune system has already begun attacking β cells, blood glucose levels remain normal and no symptoms of hyperglycemia are present. While 85% of individuals with just a single antibody do not progress to symptomatic T1DM within 10 years, some single antibody patients can.15 This progression in these patients appears to be correlated with age of less than five years and in cases where the single antibody is directed to IA-2 or displays higher affinity.

At Stage 2, individuals test positive for two or more diabetes-related antibodies like in Stage 1. However, at this stage, blood glucose levels become abnormal as a result of β cell loss. Stage 2 is still an asymptomatic stage, like Stage 1. Individuals in this stage have a gradual metabolic deterioration with persistence of substantial β cell function until at least six months before symptomatic T1DM occurs.15

Stage 3 is when a clinical diagnosis of T1DM is made. At this stage, individuals display symptoms of hyperglycemia due to significant β cell loss. Symptoms of hyperglycemia include polyuria, polydipsia, weight loss, fatigue, and DKA. The earlier a person can be diagnosed with T1DM, the earlier that treatment can start with exogenous insulin which improves chances of less secondary organ damage.

Research is being conducted to screen first- or second-degree relatives of persons with T1DM in order to identify persons at risk of developing illness, prior to the onset of Stage 3 symptoms. 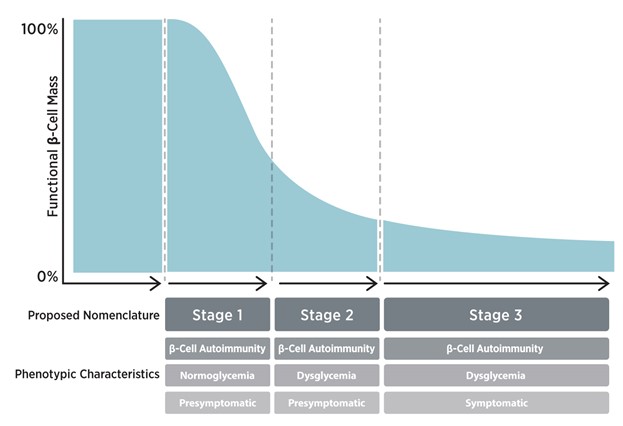 While the radioimmunoassay (RIA) was the former gold standard for GAD and IA2 antibody detection, ELISAs are now available which provide comparable performance while being safer to perform. The EUROIMMUN anti-GAD and anti-IA2 ELISAs show a 97 and 98% agreement with the corresponding RIAs, respectively.16 However, RIA detection is optimal for detection of autoantibodies against insulin. A newly developed ELISA has been made for the detection of autoantibodies against ZnT8. This test has a sensitivity of 72% in pediatric and 54% in adult T1DM patients.16

The indirect immunofluorescence assay (IFA) enables the detection of all ICA using pancreas as a substrate. The reaction of ICA with the endocrine section of pancreas tissue results in a smooth to granular cytoplasmic fluorescence of all islet cells.

According to the World Health Organization, T1DM is currently not preventable.17 However, some researchers allude to the possibility of prevention during the latent stage prior to the destruction of β cells.18 Moreover, simultaneous autoantibody testing of GAD65, IA-2, IAA, and ZnT8 can aid in early detection and clinical diagnosis of T1DM. The most significant therapy against T1DM to date is exogenous insulin. However, diabetes management can vary due to patient nonadherence, lack of insulin access, and cost burden.

Future therapies such as anti-CD3 antibodies (i.e., teplizumab and otelixizumab) suggest evidence of sustained preservation of C-peptide levels (insulin production).18 Clinical trials are still underway to determine their long-term safety and efficacy. Anti-CD20 antibody treatment (i.e. rituximab) also showed improved C-peptide responses but long-term impact has not yet been reported.18 In the future, therapies that target autoimmune diseases, inflammation, or closely emulate pancreatic function may have a significant impact on diagnostics as well as prevention and therapeutic approaches for T1DM.